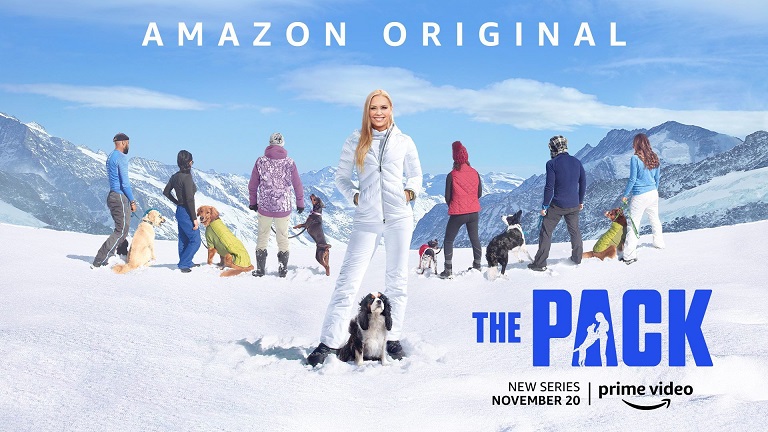 Amazon Prime Video’s new show The Pack is streaming, and it will leave a giant paw print on your heart.

Hosted by Olympic gold medalist Lindsey Vonn and her Cavalier King Charles spaniel Lucy, the show takes 12 dog-human duos across the globe, testing their teamwork and the strength of their bond with a series of challenges and exhilarating, unforgettable adventures. The winner takes home $500,000, along with $250,000 for the charity of his or her choice. We promise we won’t spoiler it in this article!

The Pack is very similar to The Amazing Race, but better … because dogs. With just the right amount of delightful cheesiness and a mix of our favorite breeds large and small, this is the ultimutt show for dog lovers and their pups to enjoy together on the couch.

Filmed before the COVID-19 pandemic, Vonn and Lucy join the contestants as they traverse the beaches of Los Angeles, the jungles of Costa Rica, and a Day of the Dead festival in Mexico City, and the Alps in Switzerland, just to name a few locales. Along the way, The Pack donated $250,000 to charities and rescue missions throughout the countries where the show took place. The Switzerland episode was my favorite and when you see it you can probably guess why.

The dogs and their partners partake in everything you want to see in a dog competition, from scent work, to search and rescue missions, to athletic endeavors like paddle boarding, rappelling, and ziplining (no one reading this is surprised—we all know dogs can do amazing things!). And it’s evident throughout the show just how much these pet parents are truly in love with their canines (again no one is surprised—we love dogs).

Going into the first episode, about 1.5 minutes went by before I felt the happy tears coming on. This show is so sweet, I found myself emotionally invested from the get-go and didn’t want to see anyone eliminated. But since it is a competition, one of the duos has to go home in each episode.

Being a dog trainer myself, I was instantly a big fan of Ace the Border Collie and his owner Mark LeBlanc. He was my pick from the begging to win it all.

And you can’t talk about The Pack without acknowledging the budding romance between Snow the poodle and her look-alike male pack teammate Derby, (aptly named by his human partner Kentucky). Never have I ever seen such a power couple (with amazing doggy hairstyles, to boot), or been so enamored with a reality show love story.

Since I’m always a sucker for an underdog, Allister the wirehair rat terrier, Charlie the schnoodle, and Chance the Chihuahua gave a tug on my heartstrings. Chance, the smallest dog in the whole competition, was adopted by his mom, artist Linh Iacona, after she had lost her previous pup.

Amazon Prime Video’s new show The Pack is streaming, and it will leave a giant paw print on your heart. Click To Tweet

“Before he passed away, he looked up and me and smiled. And that smile, for me, I took it as like, ‘Don’t worry I’m going to see you again.’ And when I saw Chance, that was the look that he gave me. He just knew, ‘I know you’re my mom,’” says Iacona in episode one. “That’s why his name is Chance, because he gave me a chance to be a dog mom again.”

It’s stories like this that really make The Pack a special series, showcasing the strength of the bonds between dogs and their people that is like no other bond on earth.

Would I recommend this show? Most definitely. To be honest, we are about ready start re-watching episode one.

Grab your dog, grab your family, grab mug of hot cocoa and secure your spot on the couch for the next 10–11 hours, and definitely give this one a binge.

Amazon Prime members can stream The Pack at no additional cost via the Prime Video app, Fire TV, and online at amazon.com/originals.

As I watched the show I kept saying, “look at all these Insta-moments.” I have included the links to each of the participants Instagram so that you can follow them too! 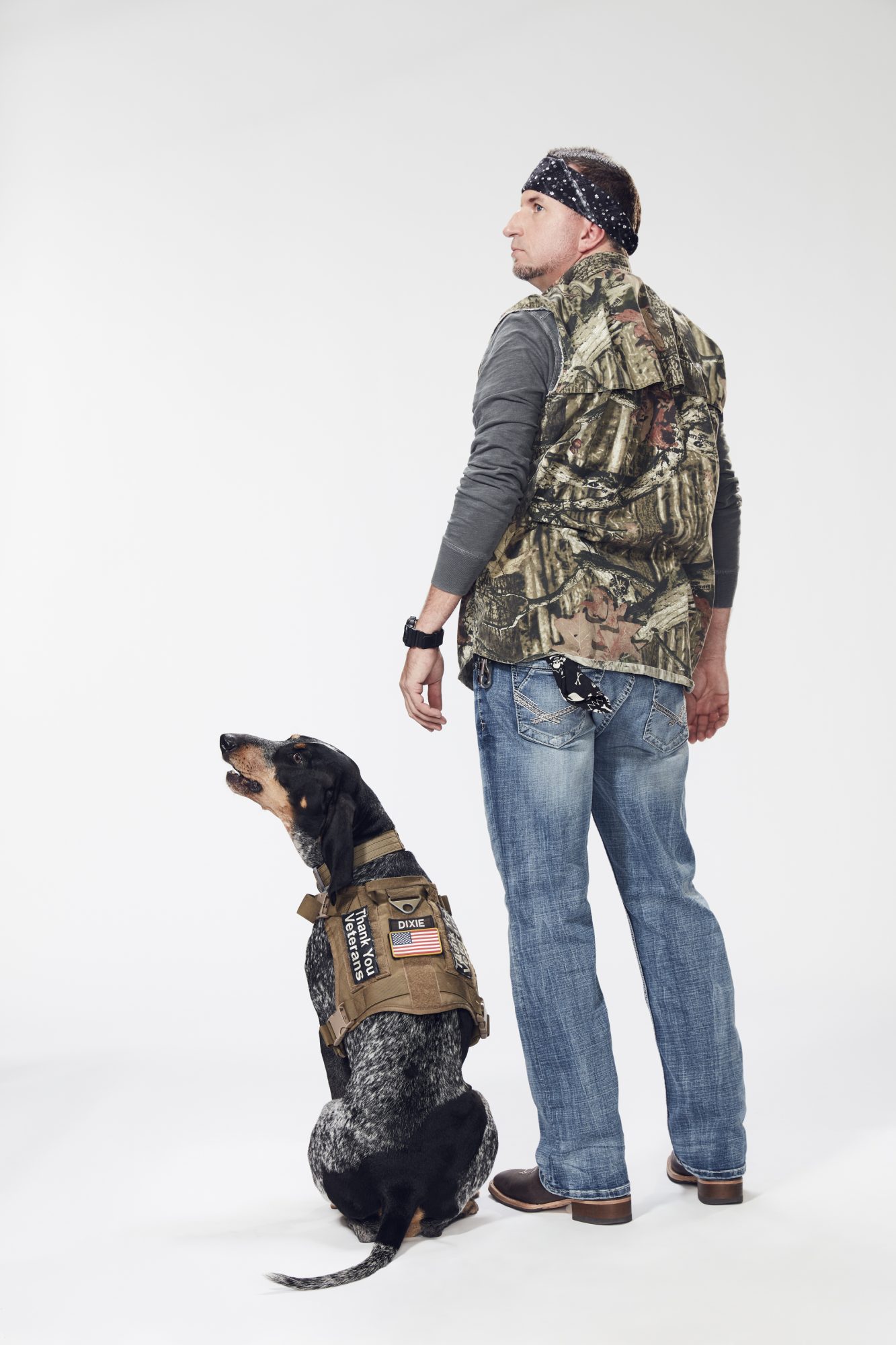 Dixie is a 5-year-old old bluetick coonhound. She’s a therapy dog for veterans and a deer tracking dog. She’s known as “Dixie The Praying Dog” because Calvert taught her how to “bow” down to pray as a way to say thank you to veterans on command. Calvert is a 47-year-old man from Camby, Indiana. Calvert drives semi-trucks half of the week while taking Dixie to public appearances and events for the rest of the week. Both Calvert and Dixie have dedicated their lives to helping veterans, kids, and anyone who might need a smile. Calvert and Dixie have a custom Jeep Wrangler with Dixie’s signature logo on it. They drive around in the Jeep participating in parades, escorting charity motorcycle rides, and escorting veteran’s funerals 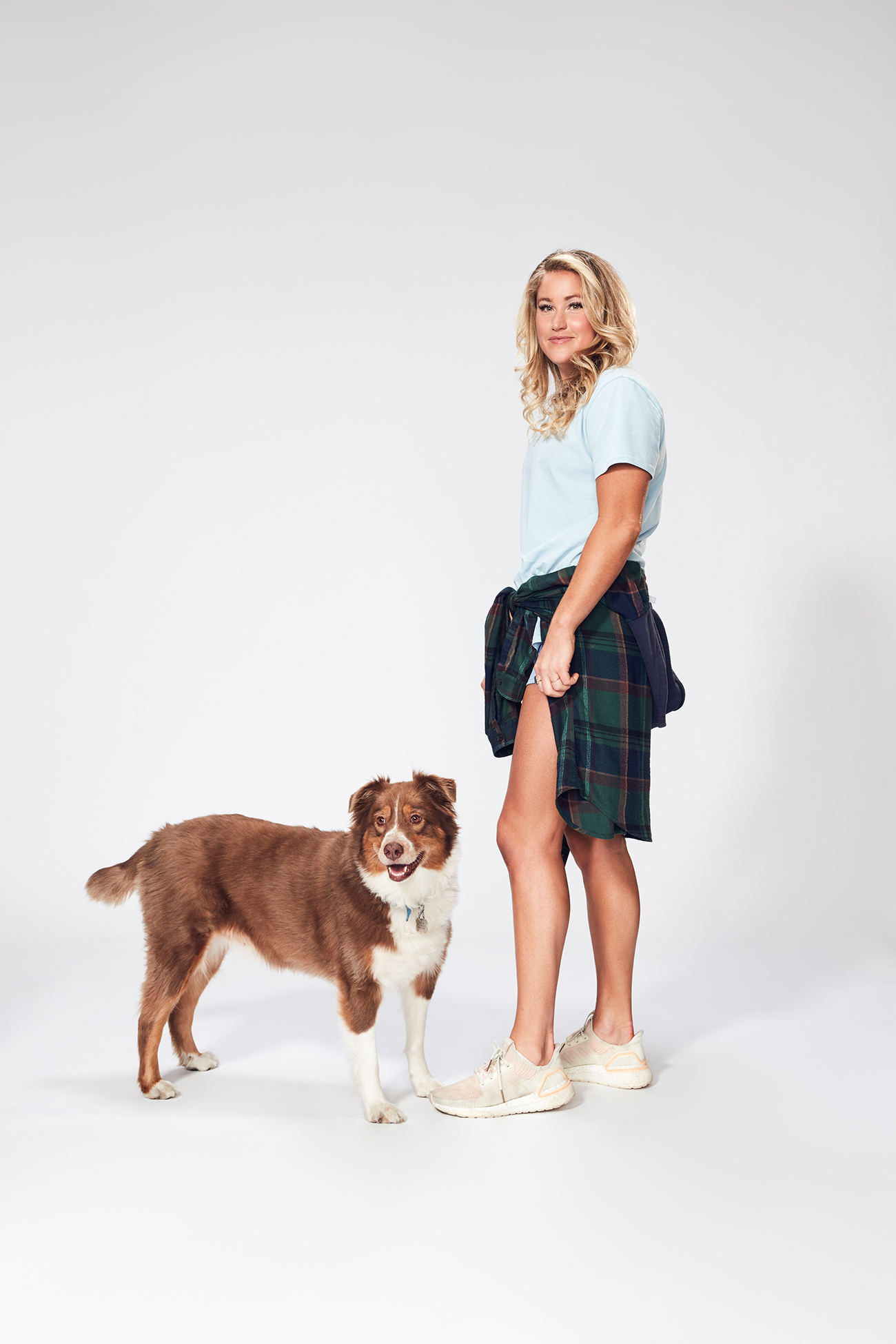 Gryffin and Chelsey currently live in Newport Beach, Calif., where they enjoy doing activities such as surfing, stand-up paddleboarding, yoga, beach volleyball, and anything else outdoors. Chelsey played college volleyball at UC Santa Barbara and is a yoga instructor. Chelsey found Gryffin at just 7 weeks old about 7 years ago on her way home from a trip, and Gryffin hasn’t left her side since. They do everything together. Chelsey even brings her to work, teaching her yoga classes with Gryffin by her side! 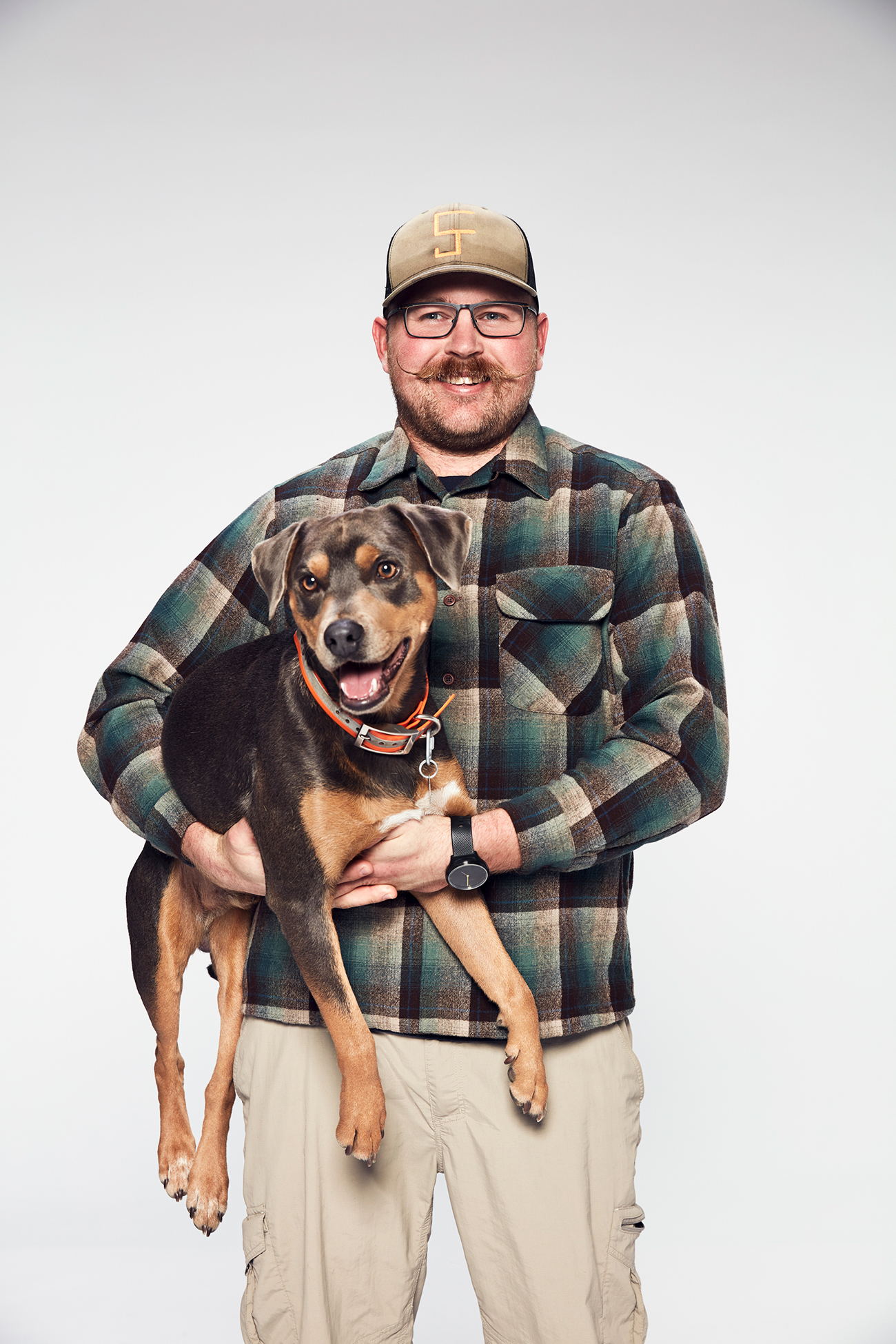 Kepo joined Chisum’s family in 2017. Chisum initially got Kepo as a friend to his older dog (who has since passed away) as well as a new friend for him. Chisum began to train Kepo as a tracking pup, and through that, they grew a close bond. Chisum says he didn’t realize how smart a dog could be until he befriended Kepo. Chisum credits Kepo for keeping him grounded after a stressful day at the fire station. 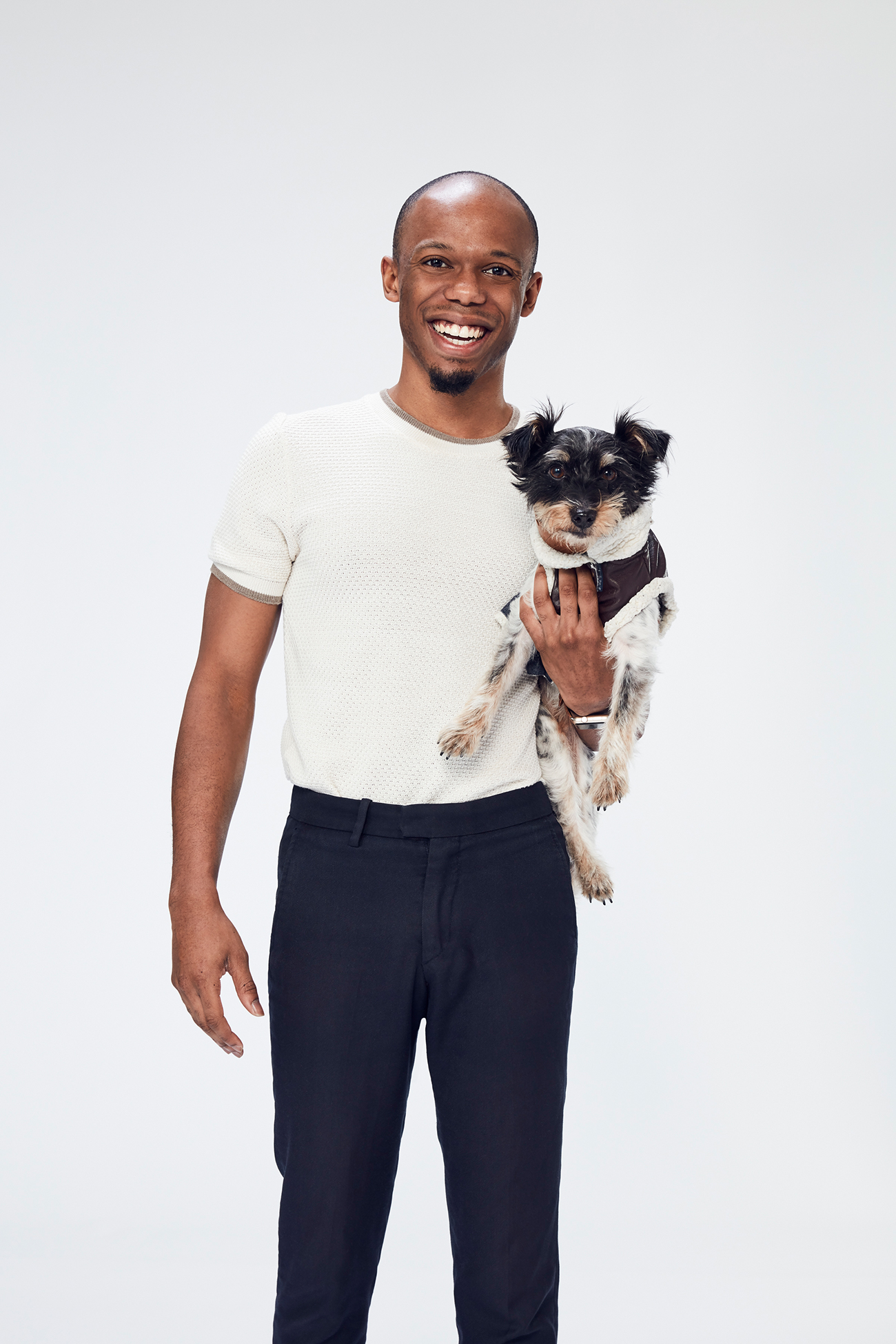 Four years ago, Daniel Reese was blessed to be in the right place at the right time rescuing Allister, his sweet wirehair rat terrier, making him Daniel’s forever fur best friend. Allister is always ready for the next big adventure. Daniel gets so much love from Allister that he now wants to share that feeling with the world. 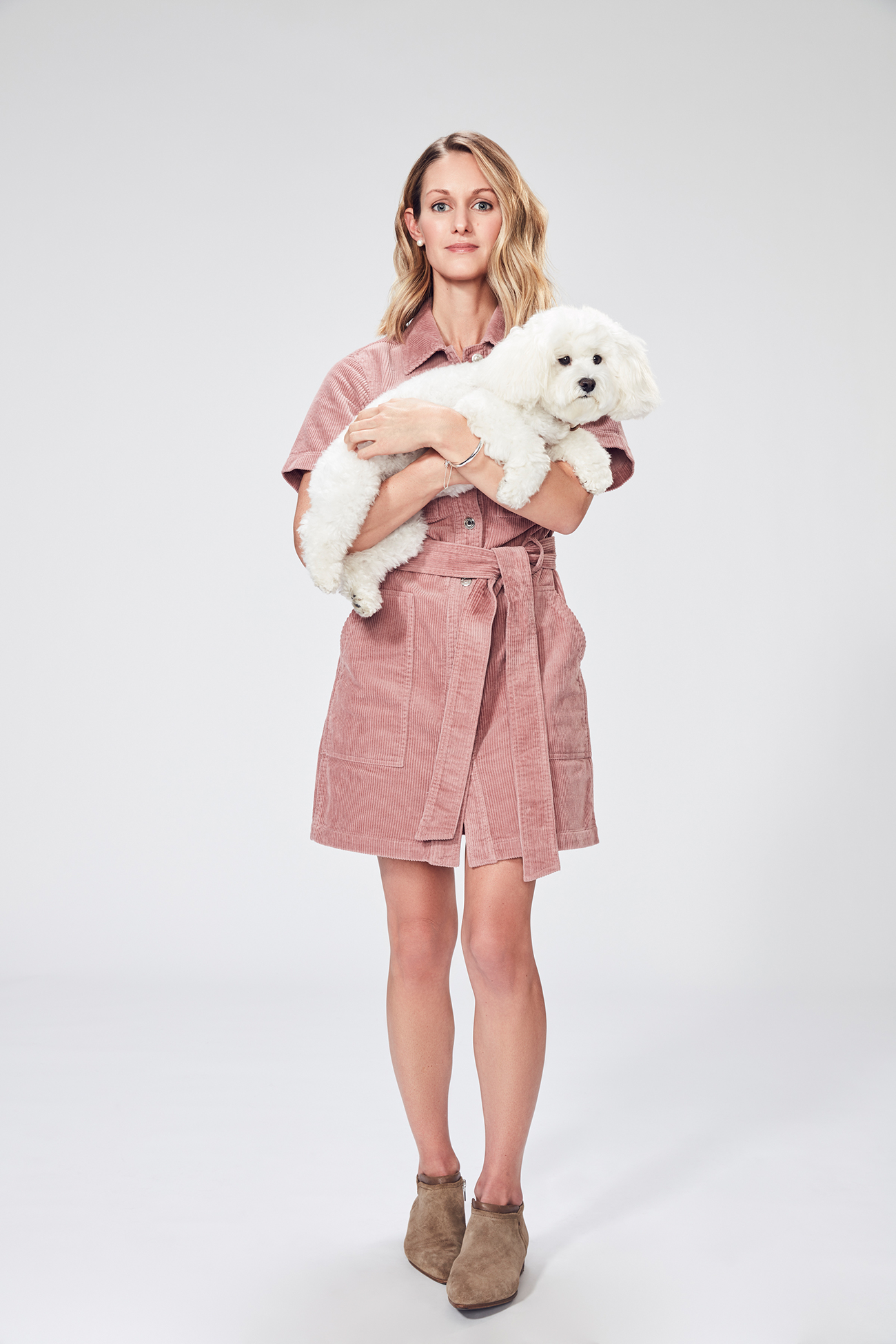 Donna Modafferi and her schnoodle (schnauzer-poodle) Charlie currently reside in New York City. Donna fell in love with Charlie’s adorable face from a photo she saw online—proving there is such a thing as love at first sight. When Donna brought Charlie home in July 2016, Charlie fit into Donna’s little family perfectly and has brought them so much joy and love ever since. 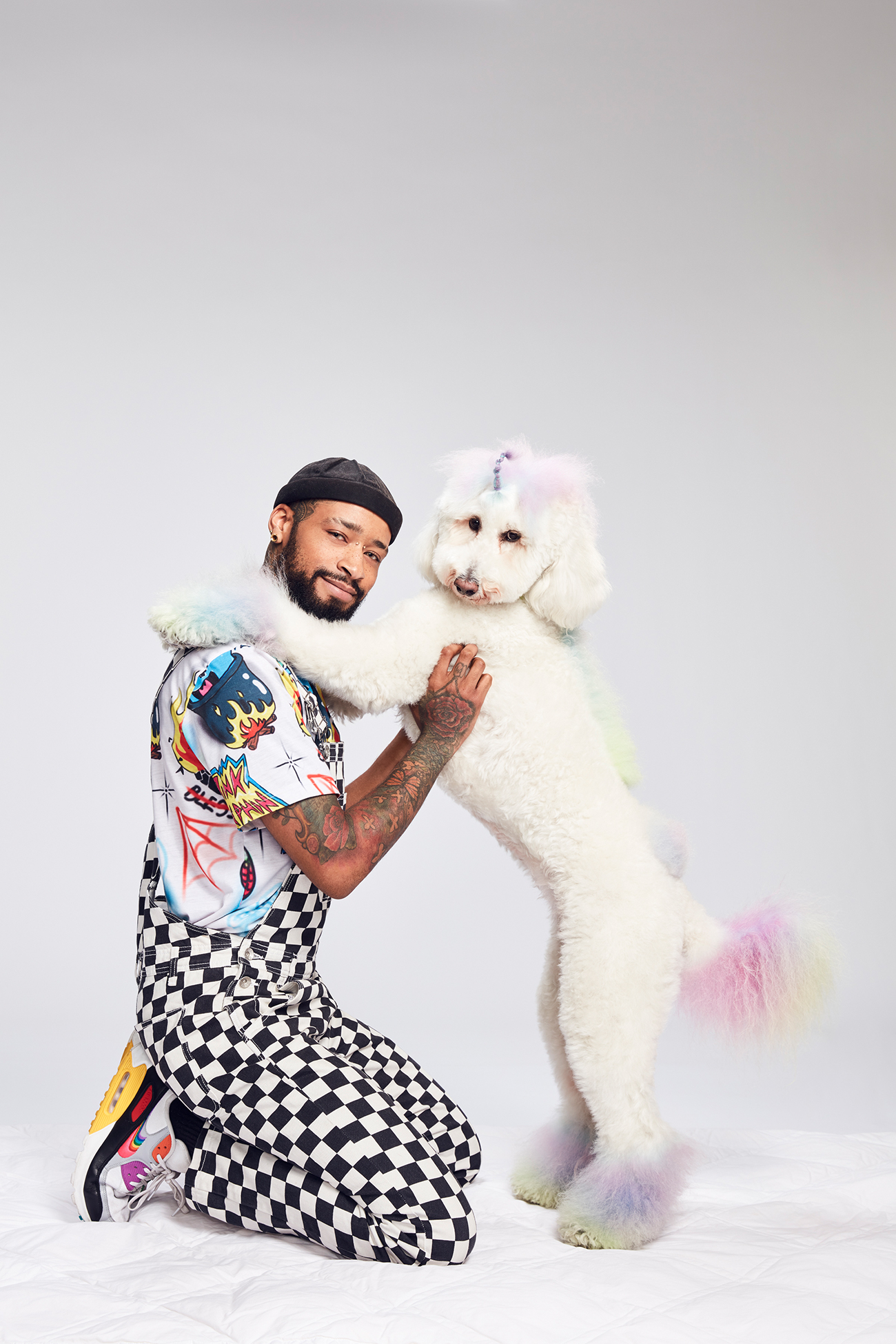 Josh has a 3-year-old standard poodle named Snow. Josh loves to groom Snow, changing up her look to then go out and take photos of her! Snow enjoys all the attention and all the love, but most of all, she just enjoys spending time with Josh—and Josh enjoys spending all his time with her! 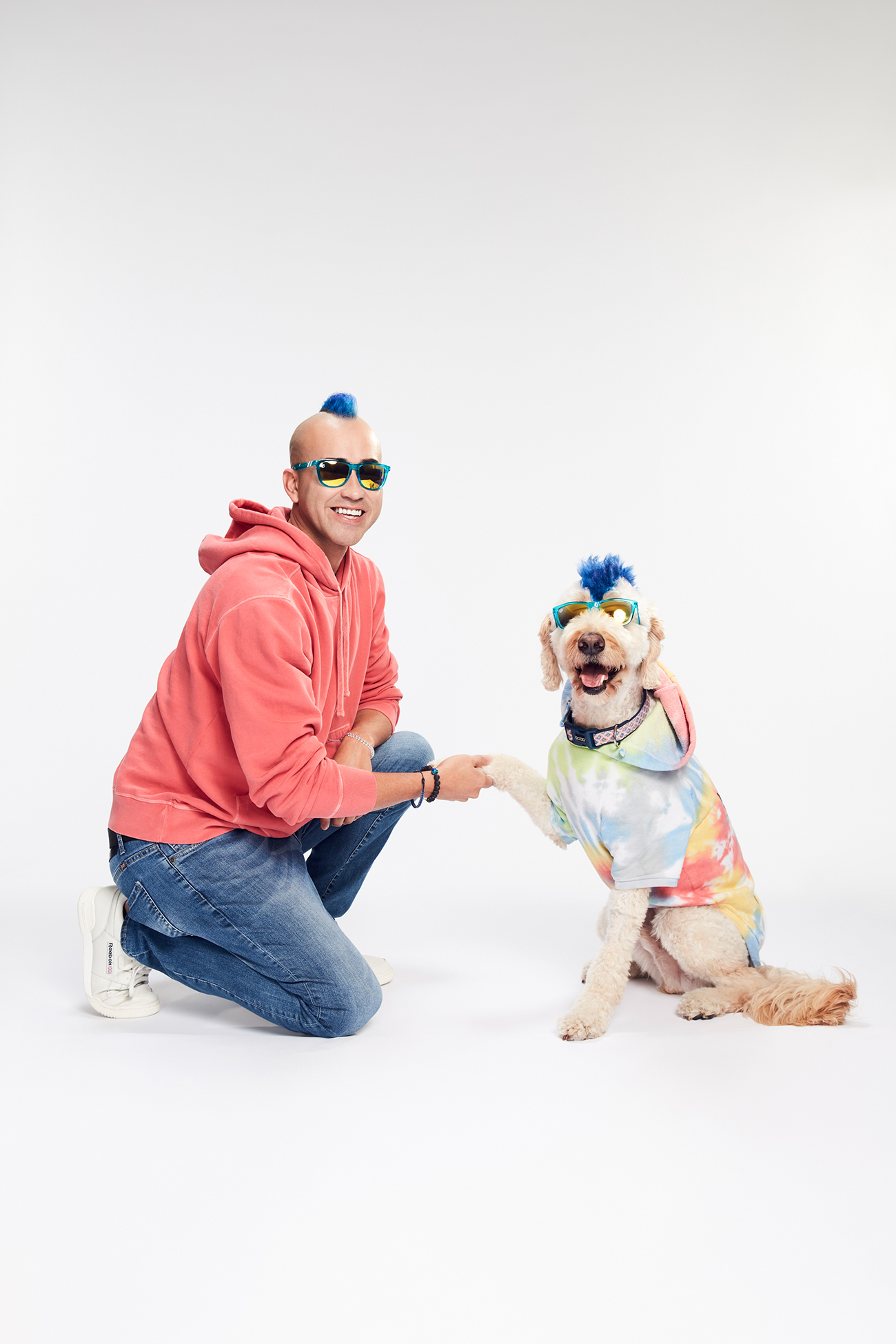 Kentucky got Derby the goldendoodle from a loving family that realized that they couldn’t take care of him and needed to re-home him. Kentucky took him in, and they have been best friends ever since. Once living with Kentucky, Derby discovered a whole new world, and Kentucky helped give Derby the confidence to enjoy and explore it. Derby came into Kentucky’s life at a low point, and he helped get Kentucky through the hard times and start a new life in San Diego. Together they are inseparable. They love to surf, ride motorcycles, and find new, fun, crazy activities together. 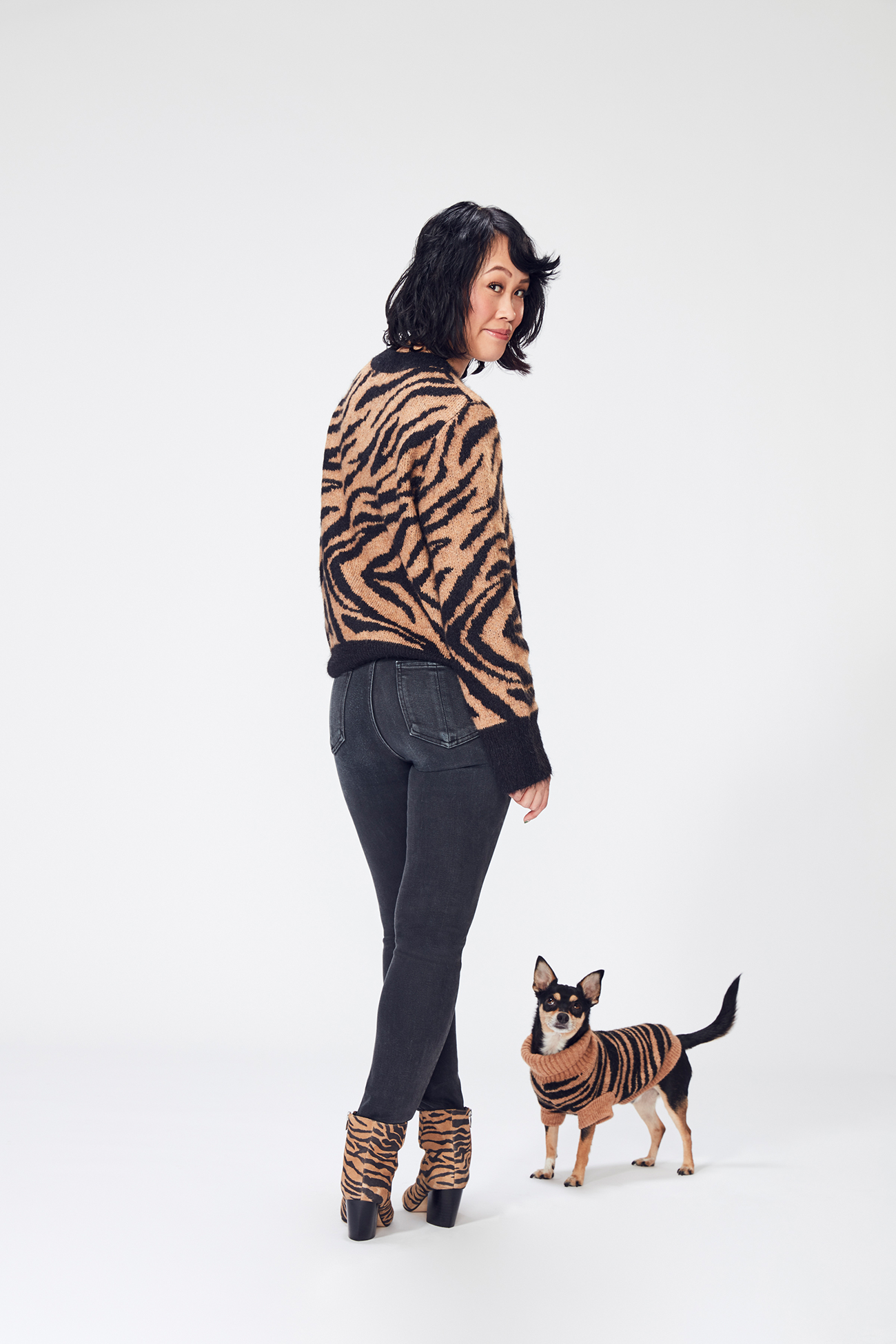 After suddenly losing Linh’s first dog, a senior rescue, she searched on Petfinder and found Chance (who at the time was called Griff). She drove 8 hours that day to pick him up at his foster home. At only six weeks old, he was found homeless roaming the streets of Kentucky, then transported to Pennsylvania to be fostered. She adopted Chance at three and a half months old, and now he’s living his best life in Brooklyn. 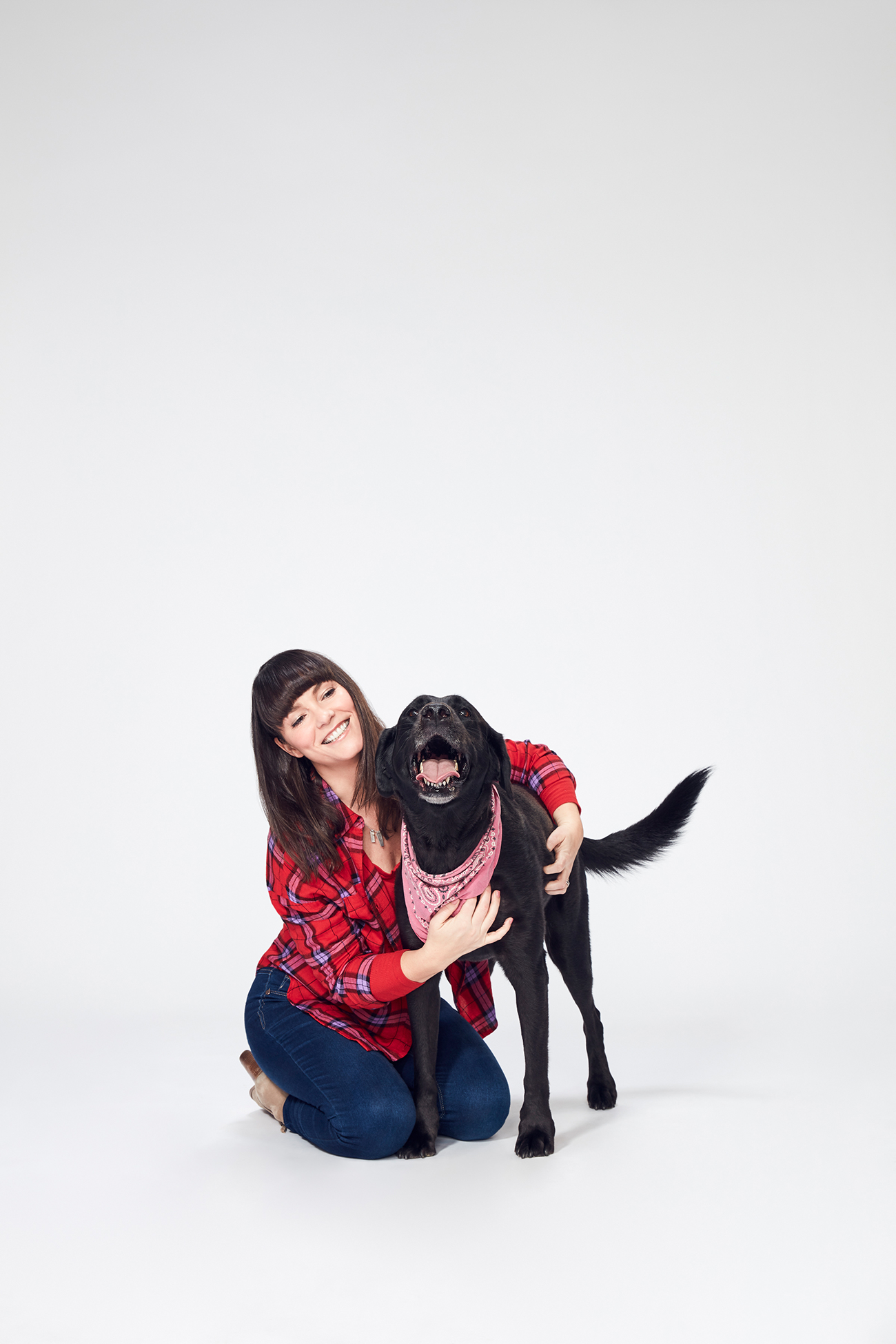 Duchess is an 8-year-old black Lab that loves tennis balls and playing fetch with Lucy, a stay-at-home mom of four kids, and two dogs. Duchess and Lucy’s bond began when Duchess was four months old. With a toddler and baby already in tow, Lucy decided to adopt Duchess from Southern California Labrador Retriever Rescue. But as the years went on, it’s pretty clear that Duchess was the one doing the rescuing all along. The unconditional love, security, companionship, and emotional support Duchess has provided Lucy and her kids has gotten their family through some of life’s most devastating losses and obstacles. Not only has Duchess saved the lives and hearts of Lucy and her family, but Duchess is also about to win over your hearts as well! This duo may be the oldest female team on The Pack and viewed as a couple of underdogs … but never underestimate the inner strength of a mom and her Lab. Lucy and Duchess are here to prove you CAN teach an old dog new tricks! 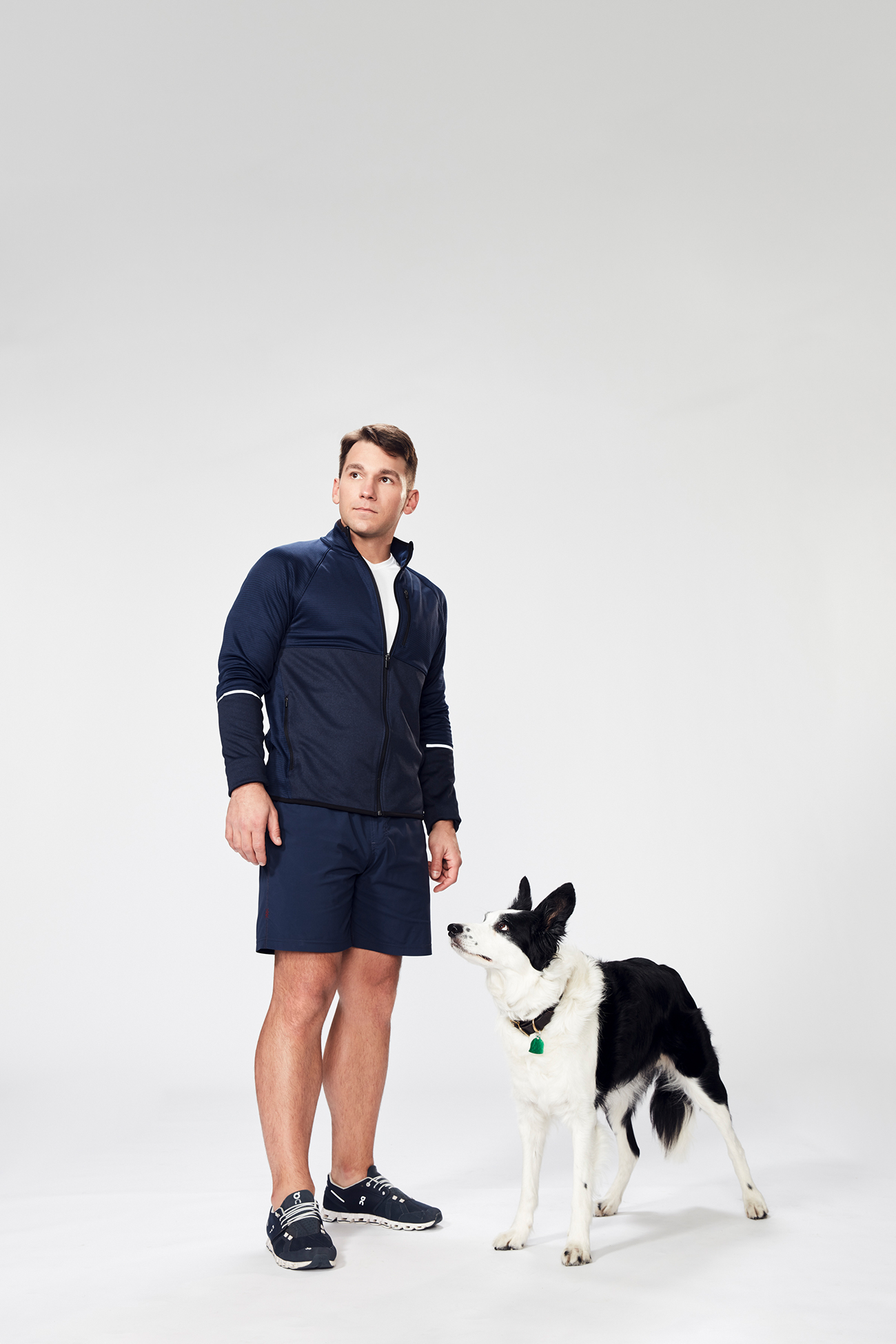 Mark is a 31-year-old mechanical engineer and professional photographer with a furry best friend named Ace, who is a 10-year-old border collie. Mark specifically wanted a breed that could match his physical abilities and intensity—Ace was exactly that for him. They love to push themselves to the limit in the mountains. Living in Salt Lake City, Utah, they are always active outdoors doing things like rock climbing, backcountry skiing, mountain biking, and trail running. At six months old, Ace was catching frisbees 30 yards away, and at 10 years old, a 10-mile trail run is simply a warm-up. Together, Mark and Ace have an unbreakable bond and a thrill for adventure 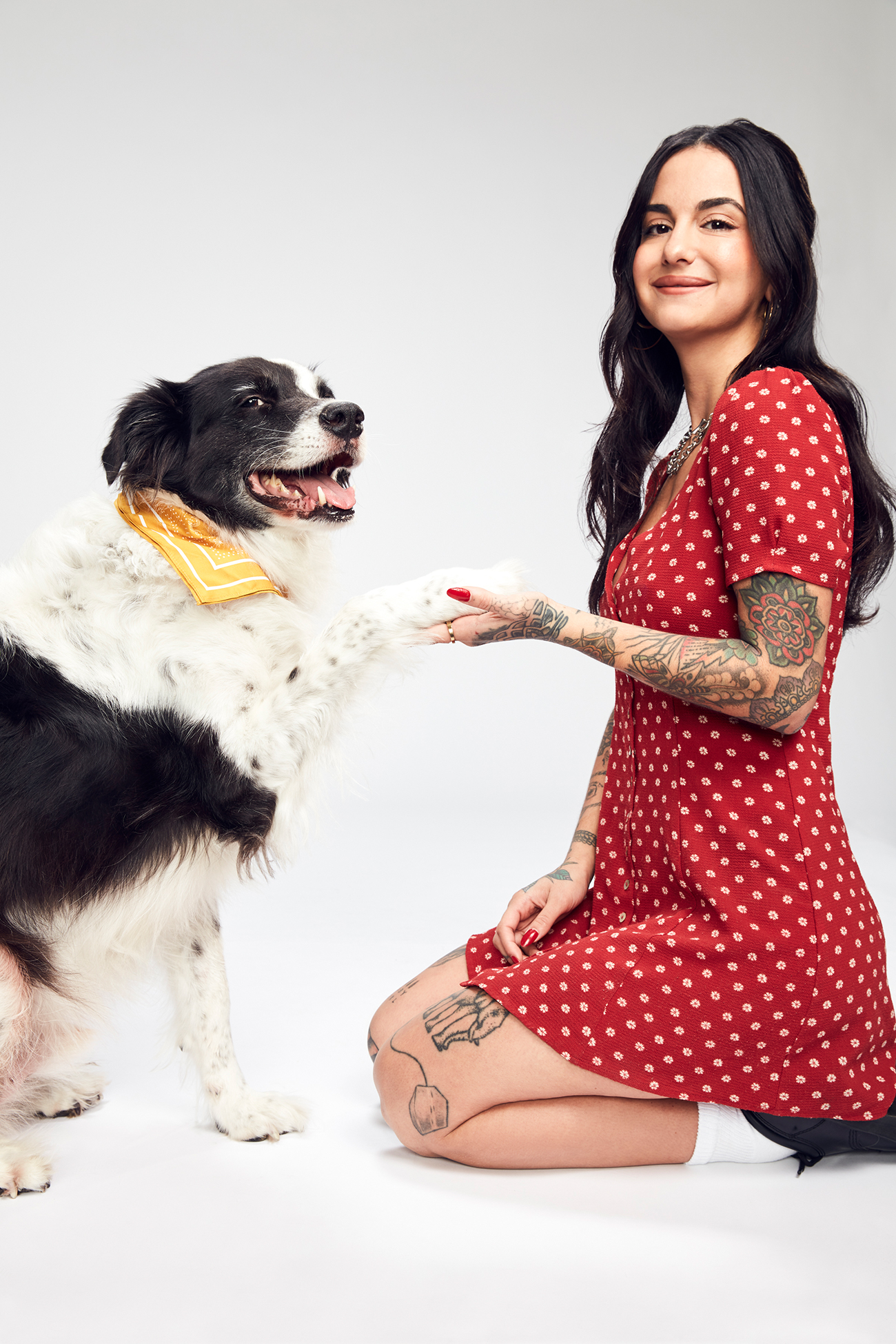 Nine years ago, Mitra Yosri met Bozley and they’ve been inseparable ever since. Bozley accompanied Mitra when she made the life-changing decision to move from Utah to Los Angeles, and they do absolutely everything together. With the unconditional love and companionship that Bozley has always provided her, Mitra has been able to take risks and pursue her dreams. Today, Mitra and Bozley enjoy cuddling and hiking through the hills of Eagle Rock and sharing food. Mitra is most happy at home with Bozley and her two cats. Bozley is happiest trying to catch flies and never leaving Mitra’s side. 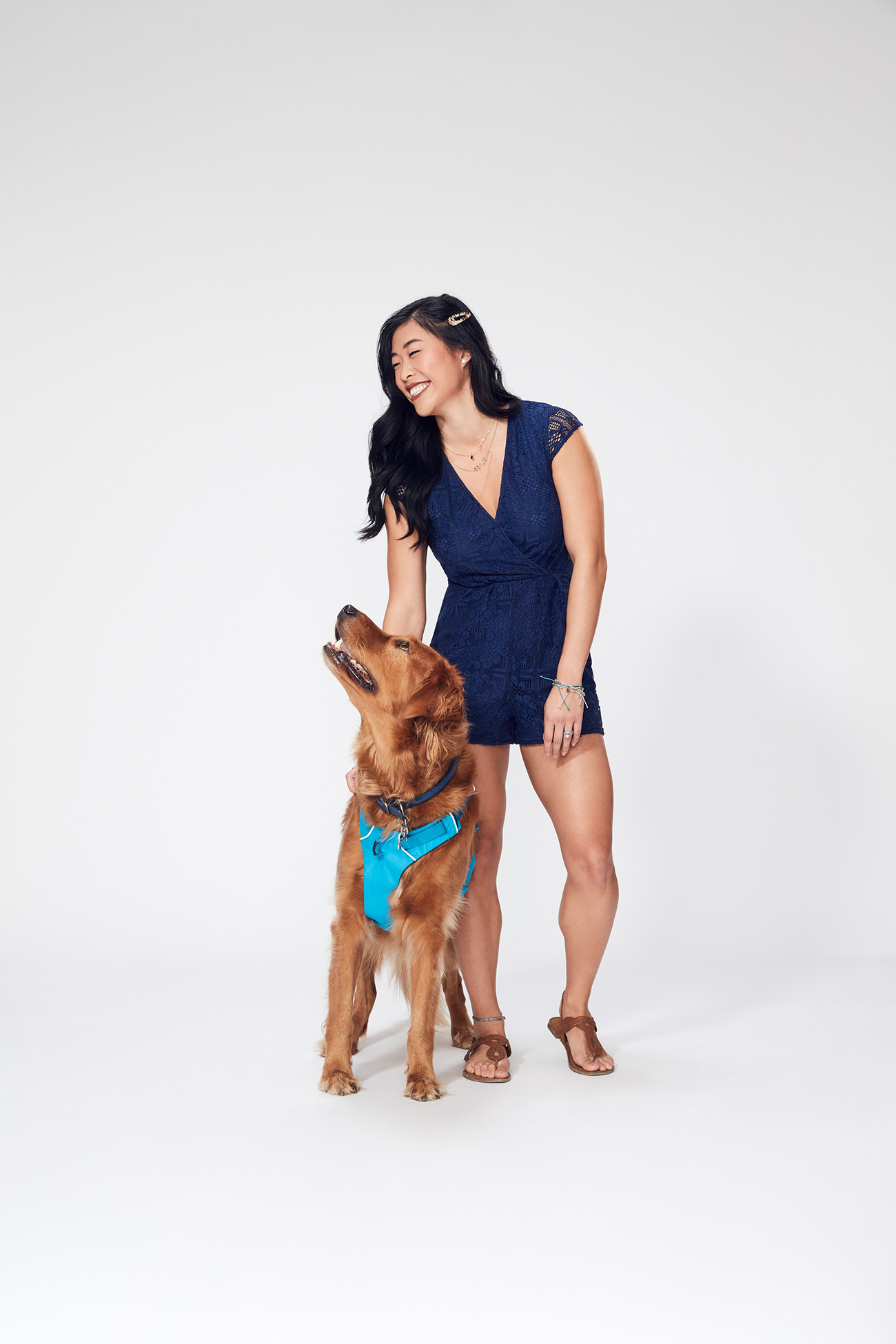 Jax is a goofy 3-year-old golden retriever, Jax loves to be attached to Vania’s hip (unless there is a squirrel around). This pair loves to spend their time soaking up the sun at the beach. Jax loves to put a smile on anyone’s face, but be careful because his dog hair is contagious!

There is word on the street that they are coming pack for season 2 with all new teams and challenges. Will you watch?

Also, stay tuned as we are going to have a major announcement regarding our Adventure Dog Club in the coming weeks and you never know, you might be able to do your own The Pack-style challenges right here at Alaska Dog Works.