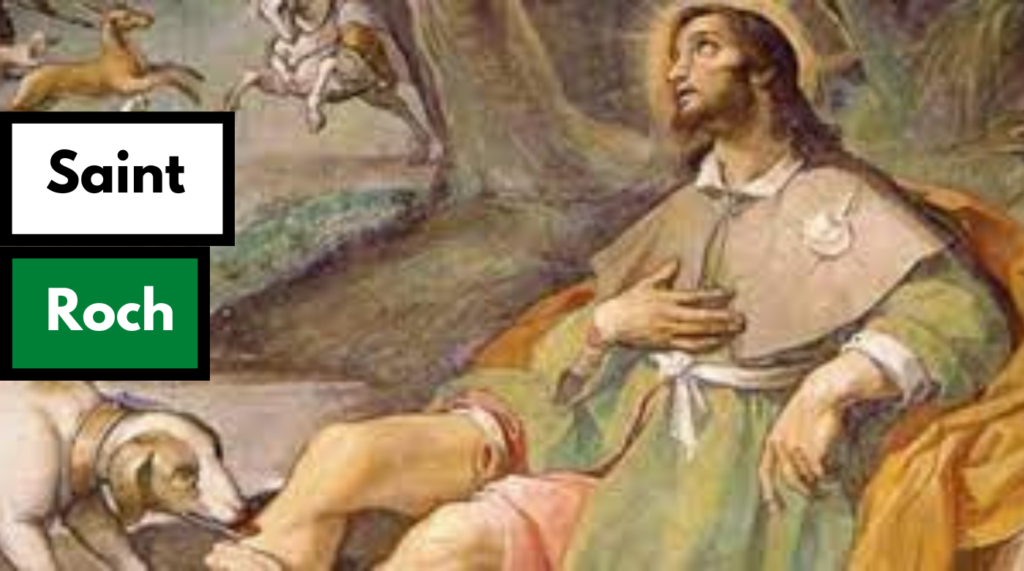 Coming up this week we celebrate Saint Roch, the patron saint of dogs on this episode of Dog Works Radio. Listen in to find how this man became beloved by so many in times of need.

Hello and welcome to Dog Works Radio. I am your host Michele Forto and I am also the lead trainer of Alaska dog works, where we help you have a better relationship with your K9 buddy. Speaking of relationships with dogs, did you know that August 16 is the annual feast day of St. Roch, the patron saint of dogs. Saint Roch (pronounced “rock”) was a Frenchman born to nobility in way back in 1295, so it may seem strange that he is recognized as the patron saint of dogs.

But, there’s a lot more to the story…

While he was born into money, he didn’t appear to be a big fan of it. After losing his parents at age of twenty, he began wandering the countryside near Rome.

Roch was well-known for donating not only his money, but his time, to the peasants who suffered from plague.

After years of helping others and donating nearly his entire fortune to others, Saint Roch eventually caught the plague himself. Not wanting to burden others with his care, he entered the forest to die alone.

As he suffered, starved and was alone, he was discovered by a stray dog.

Roch fully expected the animal to attack him and end his suffering. Instead, the animal brought him bread to eat. Every day, the dog returned with food, then stayed by his side to care for him.

It is said that this hunting dog healed Roch by licking the wounds the plague created, bringing the man food to keep him alive.

CARED FOR BY A HUNTING DOG

Eventually, Roch recovered. He and his newly acquired dog went to town and discovered that the dog was owned by a local Count who had been a friend over the years. Surprised and impressed, the dog was presented to Roch by the owner.

After they returned to France, Roch and his dog were arrested as spies. They would both spend the next five years in prison together.

Some believe that the dog survived by caring for other prisoners. Others say that the duo were cared for by an angel.

Whatever the case, Roch never mentioned his nobility to prison officials and as a result, languished in prison under false allegations until his death in 1295.

There isn’t much mention of Roch after his death. The only data we can find is in the “Golden Legend” (a collection of hagiographies by Jacobus de Voragine that was widely read in late medieval Europe).

“anon an angel brought from heaven a table divinely written with letters of gold into the prison, which he laid under the head of S. Rocke. And in that table was written that God had granted to him his prayer, that is to wit, that who that calleth meekly to S. Rocke he shall not be hurt with any hurt of pestilence.”

While history does not tell us what happened to the dog, but many feel certain that he appears in the form of every dog in the lives of our own.

So what do you think? Have you ever heard the story of Saint Roch? Tell us about it in the comments section or on our social channels, just search, First Paw Media.