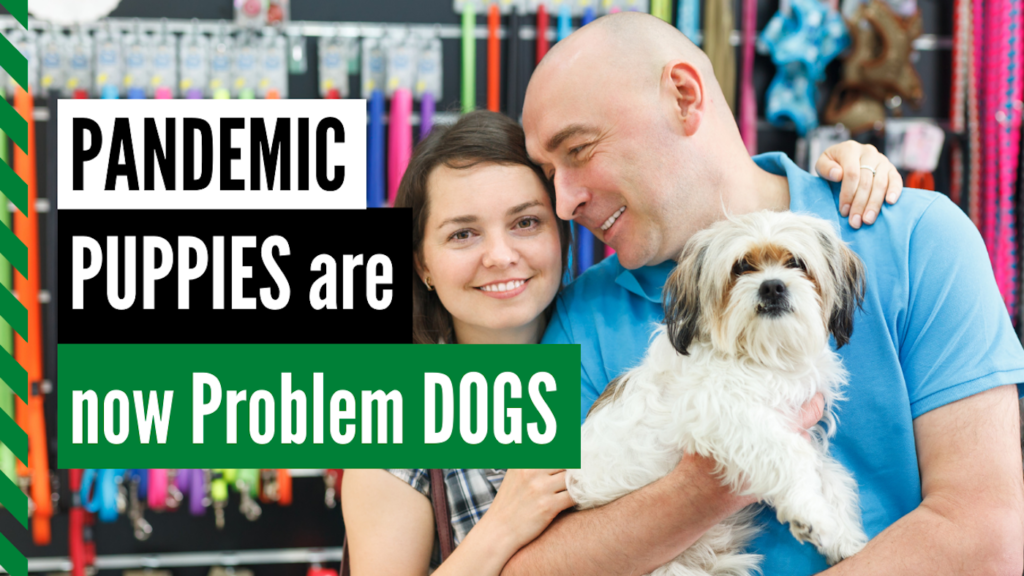 Pandemic puppies turn into problem pooches for many inexperienced owners 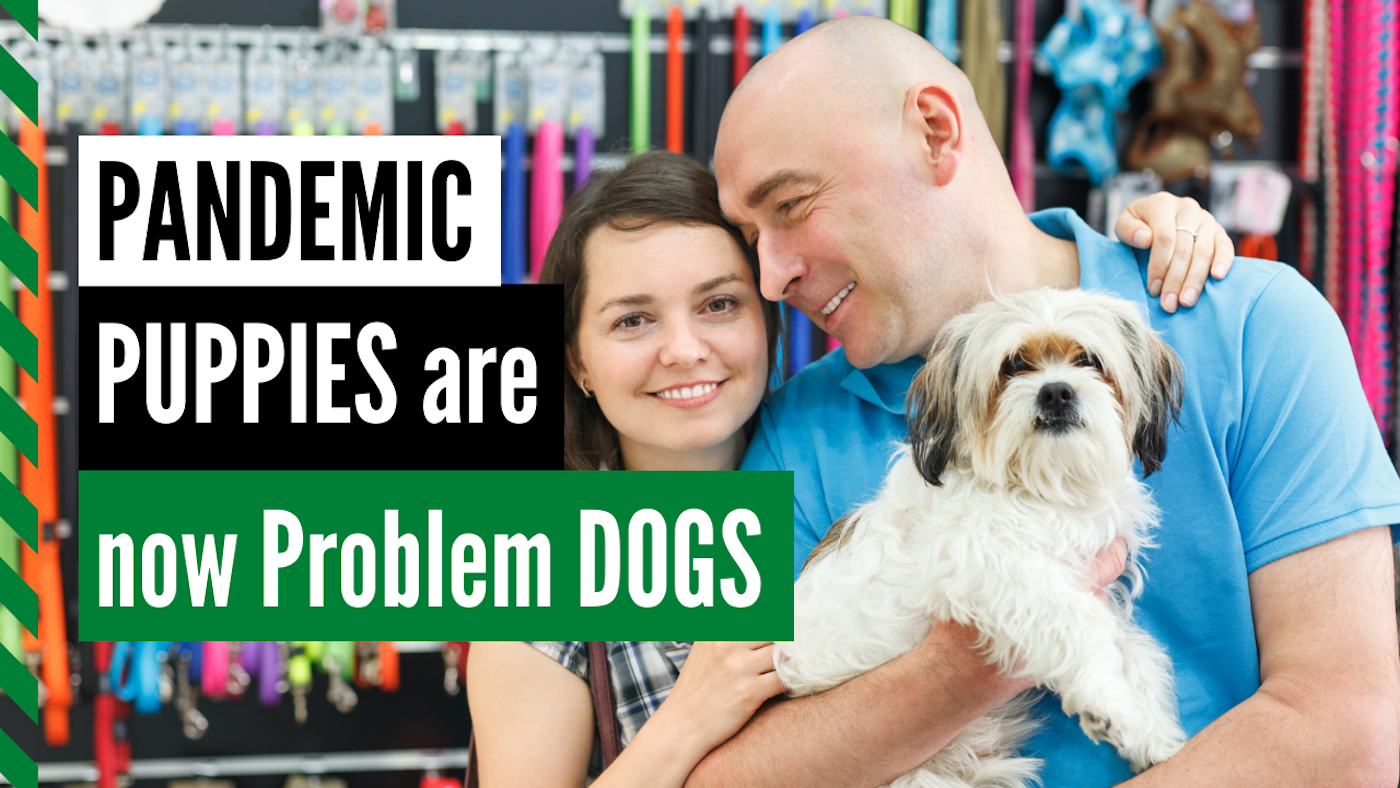 Social distancing, which kept many people healthy during the pandemic, has been a disaster for some of the dogs they adopted as companions to comfort them during those lonely days at home.

Sweet pandemic puppies, deprived of the socialization and experiences they need to learn good behavior, have grown into unruly teenagers. Owners are calling for help, and obedience classes are filling up across the country. Trainers are worried that overwhelmed owners won’t stick with the necessary classes — and will turn over their dogs to shelters. Some rescue groups say they are already seeing that happening.

“Social distancing is the worst two words you can add to a puppy’s life,” says Rendy Schuchat, owner of Anything is Pawzible in Chicago. “But that’s where we are. We have to figure out how to move forward.”

Hello and welcome to Dog Works Radio. I Michele Forto, the lead trainer at Alaska dog works. Here we help humans and their dogs have better relationships. On today’s episode, we are talking about how the pandemic is causing problems for puppies. I know, right. A few weeks ago we did a show similar to this that we called, Pandemic Puppies you can check that out over on DogWorksradio.com but today we are diving deeper and learning just how bad it can be for dogs that don’t get the socialization skills during the pandemic. Let’s jump into it…

Dee Hoult, chief executive of Applause Your Paws Canine Training Center in Miami, says she sees the lack of socialization of pandemic pups all the time. A recent case: A 9-month-old goldendoodle arrived at training class with his human family in tow. His owner, a mother of three children, got him as a puppy during the wave of dog adoptions and purchases that the pandemic unleashed. But today, he is no longer that cute little fluff ball. He’s a 50-pound adolescent who, having missed out on normal interactions with the world, is “explosively reactive” to every other dog he sees, Hoult says.

“He was not exposed to anything, and so he just can’t cope,” Hoult said. “He’s at the point now where if they try to take him out and walk him, he’s too strong on the leash, and he barks at everything.”

Today, that family is enrolled in training with the intention of keeping the dog — something trainers say many owners are doing instead of abandoning the dogs to shelters. But with people going back to work, camp and school, and other activities, trainers say they are concerned about the next three to six months when pre-pandemic “normal life” begins to rev up.

While big shelters in cities such as New York and Los Angeles are not reporting increases in the number of dogs being surrendered, some smaller nonprofit dog rescue groups in Michigan, Colorado, New York, and other states report upticks already.

A typical case, says Wendy Weisberg of Second Hand Dog Rescue in Rochester, N.Y., was that of a young woman with no dog-owning experience who got a terrier mix during the pandemic for companionship. She recently gave him up to the rescue group, saying she just couldn’t keep him; he cost too much and was getting too wild. She’d kept him in her apartment, where he got so little exercise and socialization that he began jumping around and eventually broke his paw, Weisberg says. Now healing from that injury, and getting socialized in a foster home, the dog is up for adoption — again.

“He doesn’t have any idea about other dogs or other people,” Weisberg says.

Schuchat says it’s understandable that many people thought the pandemic was a good time to get a dog. But now they’re blaming the dogs for behavior that the pandemic and our actions during it helped to create.

“People say, ‘You got wild and crazy, and I give up,’ ” Schuchat says. “It’s scary. If you’re not committed to these dogs and they have severe problems, we know where they’re going to end up.”

Behavioral problems are one of the biggest reasons dogs come into shelters, not just in pandemic times, says Maria Wickes, who heads virtual training for Dogs Trust, a British nonprofit group partnering with Animal Care Centers of NYC to offer online classes.

Many of those problems, however, can be solved through training — if owners are willing to commit to it.

The problems tend to show up in dog adolescence, which lasts until they’re about 18 months old — sometimes longer depending on the breed — and which is where many pandemic pups are now. This phase has always led families to seek out trainers because dogs go through a second fear period as their bodies enter maturity — a natural process that can undo the behavior of even perfectly trained pups, much less those deprived of the normal interactions in their early months.

As more people are vaccinated and begin to return to pre-pandemic lives, getting a dog through adolescence has become even harder. Pet owners, like everyone else, are leaving home more frequently to work, play and travel, and suddenly being around every three to four hours to walk a pandemic pup isn’t quite so easy.

When people do take the dog out for a walk, once-quiet streets and parks are now busier, full of people, cars and other sights and sounds. All of these things — to a dog who has never experienced them — feel strange and scary, and compound the behavioral challenges of canine adolescence, trainers say.

At Schuchat’s company, calls for training help with adolescent dogs are up an unprecedented 100 percent, she says. Even with 65 classes a week being offered across six locations, there aren’t enough spots for all the dog owners who call needing help.

Demand is also up in New York City, where requests for training help, once balanced between puppy owners and adolescent dog owners, are now decidedly in favor of the wilder teenager. “It’s usually 50-50,” Wickes says. “Now it’s 3-to-1 with adolescents.”

The two most common problems trainers report are reactive behavior — a classic response to poor early socialization and lack of exposure to all kinds of things — and separation anxiety as owners leave their dogs alone for what may be the first time in the dog’s life.

Reactive behavior is what happens when a dog jumps onto a person who walks through the front door or growls at a friend who joins the family at the kitchen table for a meal, or lunges and barks at other dogs while on a leash.

In such cases, humans often respond by disciplining the dog, instead of understanding that the dog is displaying behavior that can be adjusted through training.

For instance, if a dog reacts badly to something while on a leash, “it doesn’t mean the dog is aggressive, but it can look aggressive,” says Sara Taylor, director of animal behavior and training for spcaLA in California. “And if you apply a consequence to that, like pulling on the leash, you can make it worse. You’re confirming that the thing they’re reacting to is actually negative. Instead of that, you want to change their emotional response so they don’t feel negative about what’s in the environment.”

Separation anxiety, Taylor says, tends to show up in dogs as salivating, pacing, barking, urinating, defecating, and being destructive. Dogs who have lived their whole lives with their humans at home can become scared when the people leave even for what to the people seems like a short time. Humans may come home after a half-hour to find that the dog has scratched the molding off a door frame or torn into a sofa.

For some people, having that occur even once makes them think the dog is no longer right for them.

“We’ve seen a lot of separation anxiety. There have been several couches that died during the pandemic,” says Aron Jones, executive director of Moms and Mutts Colorado Rescue, which has had double the number of dogs returned so far this year compared with previous years.

Owners can make separation anxiety worse by forcing a big scheduling change on the dog all at once — such as returning to work full time without a couple of weeks, or months even, of getting the dog accustomed to being alone for gradually increasing periods of time, trainers say. Jones adds that when people come in to surrender a dog, saying they’re going back to work, “we try to offer alternatives like doggy daycare or dog walkers, but people just aren’t taking it.”

Taylor suggests that pet owners who will be returning to a life where they’re not at home as much can start by making sure that there’s a safe area, such as a den, for the dog.

“It can be a room or a crate — somewhere that the dog enjoys going with high-value enrichment items, things like a bully stick or a stuffed Kong,” Taylor said. “The owner can be home, but the dog is confined away from the owner. You can also play classical music, DVDs for dogs. You’re setting up a time daily so that the dog has practice being alone.”

Alex Bearman is working on separation anxiety with her labradoodle, Sydney, which she got in early February, during the darkest and coldest days of the pandemic. She and her fiance were mostly staying at home, and it seemed a good time for the extra companionship of a cute puppy.

“We weren’t totally locked up, but we weren’t going out and doing things,” and the dog had little exposure to the outside world, the 30-year-old Chicagoan says. Now, when she goes out, Sydney will “sit at the window and watch me and bark,” she says. “He’ll sometimes bark and cry.”

Bearman is taking Sydney to training classes and getting tips to help him adjust. Just bringing him to a big-box store where dogs are welcome, so he could see people and new objects, was a big help when everything else was closed or snowed in. Bearman also is learning what trainers say is often the case: If the dog acts out, it doesn’t mean it’s a bad dog or the behavior is irreversible. Training — both for the dog and the owners — can help everyone do better in a new situation.

And as society continues to reopen, Schuchat says, dog owners should expect new challenges to arise. Today’s adolescent dogs will be growing into maturity as human lifestyles continue to change during the pandemic shifts.

“This is a big, moving target,” she says. “I hope people commit to these dogs. We need to find a way to keep these dogs in homes and happy.”

We want to thank Kim Kavin of the Washington Post for this story and used with permission from the Dog Writers Association of America.