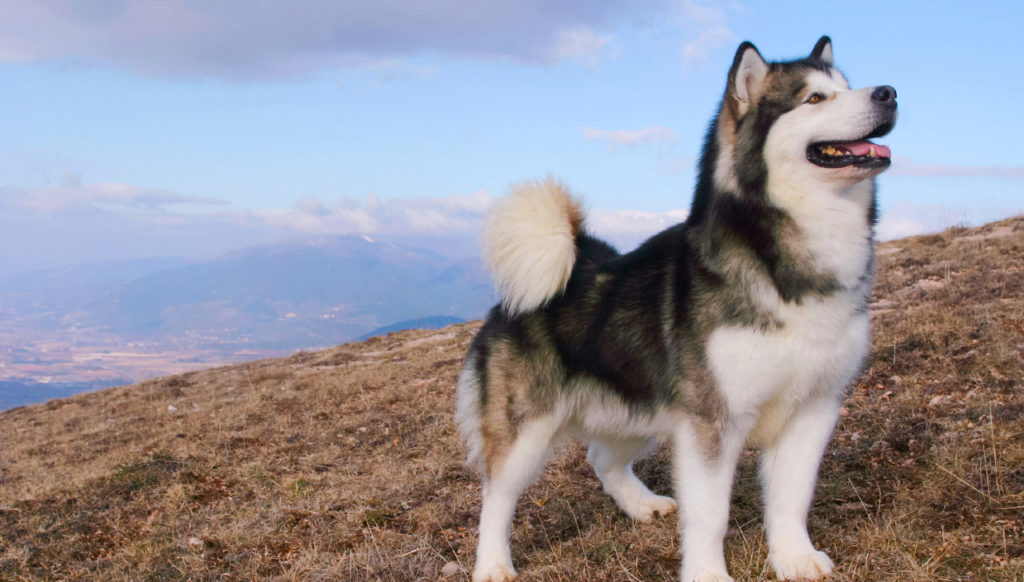 How to Train an Alaskan Malamute

Want to learn how to train your Alaskan Malamute to be one of the best trained dogs? Click here to find out how.

About the Alaskan Malamute

The Alaskan Malamute stands 23 to 25 inches at the shoulder and weighs 75 to 85 pounds. Everything about Mals suggests their origin as an arctic sled dog: The heavy bone, deep chest, powerful shoulders, and dense, weatherproof coat all scream, “I work hard for a living!” But their almond-shaped brown eyes have an affectionate sparkle, suggesting Mals enjoy snuggling with their humans when the workday is done. Mals are pack animals. And in your family “pack,” the leader must be you. If a Mal doesn’t respect you, he will wind up owning you instead of the other way around. Firm but loving training should begin in early puppyhood. That said, a well-behaved Mal is a joy to be with—playful, gentle, friendly, and great with kids.

The Alaskan Malamute is among the oldest of the sled dog breeds of the Arctic. They are believed to be a descendant of the domesticated wolf-dogs who accompanied the Paleolithic hunters that crossed the land bridges of the Bering Strait and migrated into North America roughly 4,000 years ago.

The breed’s name is derived from the Mahlemiut, a nomadic Inuit tribe that resided in Kotzebue Sound in northwestern Alaska. The dog the Mahlemiut people developed was primarily a sledge dog, created to work in packs to haul heavy loads at low speeds over long distances. However, they were also used for carrying packs in the summer, locating seal breathing holes in the ice, and distracting bears on hunts. Other Arctic dog breeds, like the Siberian Husky, pull lighter loads on sleds at faster speeds. Huskies are racers; Malamutes are freighters.

The Inuit culture spans from the coasts of Alaska to the coasts of Greenland. Because of this distance, different strains developed in the Malamute breed. The AKC recognized the original Kotzebue strain in 1935. After WWII, the breed’s numbers plummeted until there were very few dogs registered. In response, during the late 1940s and ’50s, the AKC opened the studbook to include the M’Loot and Hinman strains as well. Today, the Malamute’s gene pool is made up of all three of these strains, with Ch. Toro of Bras Coupe being the first dog to unite them.

The Alaskan Malamute should do well on a high-quality dog food, whether commercially manufactured or home-prepared with your veterinarian’s supervision and approval. Any diet should be appropriate to the dog’s age (puppy, adult, or senior). Some dogs are prone to getting overweight, so watch your dog’s calorie consumption and weight level. Treats can be an important aid in training, but giving too many can cause obesity. Learn about which human foods are safe for dogs, and which are not. Check with your vet if you have any concerns about your dog’s weight or diet. Clean, fresh water should be available at all times.

The thick, waterproof double coat of the Alaskan Malamute is beautifully adapted to harsh Arctic life, but it requires constant upkeep. A Malamute should be brushed every day with a pin brush and metal comb, all the while checking for mats, which can harbor fungus, and hot spots, which can become infected. Twice a year, during shedding season, an undercoat rake should be added to the regimen. Show Malamutes are often bathed weekly, but a pet Malamute can go six to eight weeks between baths. Conditioner can be used, in moderation, if the coat feels dry. As with all breeds, the Malamute’s nails should be trimmed regularly.

While the Malamute was not bred for racing, he was bred to work. A strong, athletic dog with tremendous endurance, designed to carry heavy loads, a Mal requires daily exercise. Romping in a well-fenced yard or other enclosed space will suffice, but Malamutes also enjoy hiking, running, and swimming with their owners. And should the owner have sufficient time and interest, Malamutes often take part in agility and obedience trials, weight-pulling competitions, backpacking (yes, you can buy a backpack for your dog), recreational or competitive sledding, and skijoring (pulling a person who is on skis).
Socialization and obedience training are necessary in order to prevent a Malamute from becoming pushy with children and other pets, or dominant over adults he or she doesn’t respect. Malamutes are highly intelligent but also independent and willful, often to the point of stubbornness. While fairness and patience can yield a devoted, trustworthy companion, there are certain behaviors that may be impossible to train out of a Mal, such as digging, so any yard fencing must continue into the ground. And Malamutes are not especially suited to be guard dogs because they tend to be friendly with everyone they meet.
The thick, waterproof double coat of the Alaskan Malamute is beautifully adapted to harsh Arctic life, but it requires constant upkeep. Click To Tweet
A responsible breeder will screen breeding stock for health conditions such as hip dysplasia (a malformation of the hip joint that is the most common skeletal condition in dogs), elbow dysplasia, thrombopathia, chondrodysplasia (“dwarfism”), hypothyroidism, inherited polyneuropathy, von Willebrand’s disease, and day blindness. As with all breeds, an Alaskan Malamute’s ears should be checked regularly to remove foreign matter and avoid a buildup of wax, and his teeth should be brushed regularly.

Want to learn how to train your Alaskan Malamute to be one of the best trained dogs? Click here to find out how.