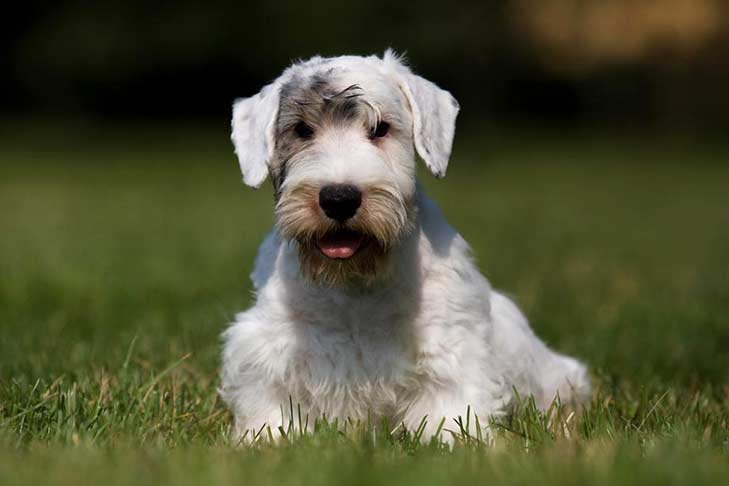 How to Train a Sealyham Terrier

Want to learn how to train your Sealyham Terrier to be one of the best-trained dogs? Click here to find out how.

The Sealyham Terrier is brave and spirited, but not as spiky as smaller terriers. These sturdy, outgoing companions are recognized by their ‘fall,’ the mass of hair covering the forehead. Sealy fans enjoy their dog’s sly sense of humor.

Standing less than 11 inches at the shoulder and weighing about 24 pounds, Sealys are not big enough to be considered medium-sized dogs, but they stand among the strongest and most substantial of what we think of as small dogs. A typical Sealy is well-muscled, built low to ground, and moves easily with long, determined strides. The weatherproof coat is predominantly white, and a long, broad head is furnished with lavish facial hair. Despite their rep as the bruiser among short-legged terriers, Sealys are cute, funny, affectionate, outgoing, and trainable, if a bit stubborn. Their alertness and a big-dog bark make Sealys excellent watchdogs. Blessed with an adaptable nature, Sealys are amenable to city dwelling or country life.

The name Sealyham Terrier honors the Sealy Ham estate on the Seal River, in southwestern Wales, where this sturdy and confident terrier was first bred. The father of the breed was an army captain named John Edwardes, who in the mid-1800s retired at age 40 and spent the rest of his life developing his dream dog.

The Sealy’s primary purpose was to work in support of the captain’s Otterhound pack. Otters in those days were considered pests who depleted the fish population on sprawling estates like Sealy Ham. Edwardes bred his terrier to be strong and tough enough to dig razor-clawed otters out of their lairs. Edwardes left behind no written records of his breedings, and modern authorities disagree as to the exact pedigree of the captain’s original Sealys. Among the breed names bandied about in their theories are the Bull, Dandie Dinmont, and West Highland Terriers. Whatever the exact breed mix, the captain succeeded admirably, creating a fearless, hardworking hunter who was also a delightful companion by the fireside. The years between the world wars were the breed’s American heyday. Sealys won Westminster’s Best in Show award three times in this era, among them was the most famous show dog of the Prohibition era, a Sealy named Bootlegger. Their high profile was further boosted by A-list Hollywood owners like Humphrey Bogart, Gary Cooper, and Cary Grant.

Sealy popularity with pet owners has waned since those heady days—puzzling, considering the breed’s many fine qualities. “They could be one of the best-kept secrets in dogs,” says one Sealy lover. The breed today is a bit larger and more affable than the feisty terriers first bred by Captain Edwardes. Their friendliness is put to good use as therapy workers in nursing homes and children’s hospitals.

Allergies are fairly common in the breed but are seldom of a really serious nature. There are several genetic eye diseases that potential sires and dams should be tested for before breeding. The American Sealyham Terrier Club provides detailed information on breed health. Non-genetic eye conditions such as tearing and infections can occur because of the breed’s long eyebrows. If the dog is a pet, a shorter eyebrow fall is a good idea. Ear infections can occur due to the weight and position of the ears, but keeping the ears clean is usually all that is required for prevention and maintenance.

The breed’s weather-resistant, double ‘jacket’ and profuse leg and body furnishings must be combed and brushed every two or three days, as Sealy coats tend to mat easily. The coat does not shed but must be hand-stripped or clipped on a regular basis. Pet Sealyhams can be kept trimmed short with minimal furnishings, which makes their care easier. Bathing every three to four weeks is a good idea. For Sealyhams in show coat, washing at least the furnishings frequently is a must. The nails should be trimmed regularly, and the eyes and ears should be checked during grooming sessions.

Sealys love to run in a safely enclosed area and enjoy plenty of exercise. They can overheat in hot, humid weather, so exercise is best in the early morning and in the evening. Grass stains are common, and it may be necessary to wash furnishings and condition often. Encourage Sealys to exercise so they get moderately tired, but not exhausted, and they will be calmer in the house. Sealys can be very active, and exercise helps them be better house pets.

The Sealyham Terrier is brave and spirited, but not as spiky as smaller terriers. These sturdy, outgoing companions are recognized by their 'fall,' the mass of hair covering the forehead. Click To Tweet

As with most terriers, Sealys require a firm but not harsh training technique. The Sealy puppy should be socialized early, being gently exposed to a wide range of dogs, people, and places, and this will help to discourage any dog aggression later on. Sealys can be food guarders, and this must be corrected right away. Don’t allow the dog to get away with it, ever.

The Sealyham Terrier should do well on a high-quality dog food, whether commercially manufactured or home-prepared with your veterinarian’s supervision and approval. Any diet should be appropriate to the dog’s age (puppy, adult, or senior). For a Sealy who competes in dog shows, avoid food containing extra dye, as the dye tends to stain beards and may also color the urine, which can leave hair yellowish. Some dogs are prone to getting overweight, so watch your dog’s calorie consumption and weight level. Treats can be an important aid in training, but giving too many can cause obesity. Learn about which human foods are safe for dogs, and which are not. Check with your vet if you have any concerns about your dog’s weight or diet. Clean, fresh water should be available at all times.

Want to learn how to train your Sealyham Terrier to be one of the best-trained dogs? Click here to find out how.