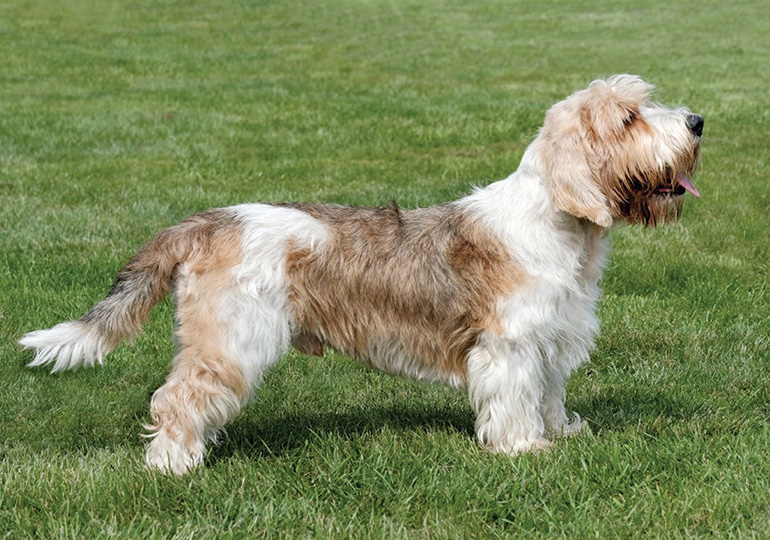 How to Train a Grand Basset Griffon Vendeen

Want to learn how to train your Grand Basset Griffon Vendeen to be one of the best-trained dogs? Click here to find out how.

The Grand Basset Griffon Vendéen is a French scenthound. Somewhat active and never high-strung, yet GBGVs are busy dogs who don’t tire easily.

First, let’s deal with the name. Roughly translated, it means ‘Large, low, shaggy dog of the Vende’ and is pronounced ‘Grand-Bah-SAY Gree-FOHN VON-day-uhn.’ Now, let’s have a look at the dog: He’s a sweet-faced, long-eared fellow in a shaggy coat whose mustache, beard, and profuse eyebrows suggest the look of a worldly but amiable Frenchman. Beneath the Grand’s Old World charm is a rugged, sturdily-built bruiser who is deceptively quick and light-footed. The stamina and courage of these longer-than-tall hunters is the stuff of Gallic legend.

In general, French hounds developed into the breeds they are today by forming to fit the particular needs of their geographic areas. The dense, thorny, rocky region of the Vendeé required a hardy breed of dog with mental and physical stamina and a coat that resisted brambles. Also, hunters of the lower classes who did not own horses needed a slower hound so they were more easily able to keep up. Their solution was to shorten the legs of the dog and, through evolution and breeding, a low-set dog was created. By the end of the 19th century, the Basset Griffon Vendéen, combining both hardiness and a shortened leg, had evolved as a part of the basset breeds of France.

By the 1950s, the Grand was separated into its own standard and considered a separate breed, though interbreeding between the Grand and Petit was not banned until 1977.

Like all breeds there may be some health issues. Some dogs may be faced with these health challenges in their lives, but the majority of Grand Basset Griffon Vendéens are healthy dogs. Working with a responsible breeder, those wishing to own a Grand Basset Griffon Vendéen can gain the education they need to know about specific health concerns within the breed. Good breeders utilize genetic testing of their breeding stock to reduce the likelihood of disease in their puppies.

The Grand Basset Griffon Vendéen requires only a weekly brushing with a slicker brush and comb. Beyond regular weekly grooming, the occasional bath will keep him clean and looking his best. Grooming can be a wonderful bonding experience for you and your pet. Their strong fast-growing nails should be trimmed regularly with a nail clipper or grinder to avoid overgrowth, splitting and cracking. Their ears should be checked regularly to avoid a buildup of wax and debris which can result in an infection. Teeth should be brushed regularly.

The Grand’s quiet, docile demeanor makes them excellent companions and house dogs. Be prepared to give your new GBGV lots of exercise. They will not thrive as a couch potato. You must have a securely fenced-in area for exercise, since these hunting dogs cannot resist the urge to chase. They are sturdy and do not slow down with age, so plan on keeping their exercise routine going into their teenage years.

Want to learn how to train your Grand Basset Griffon Vendeen to be one of the best-trained dogs? Click here to find out how.