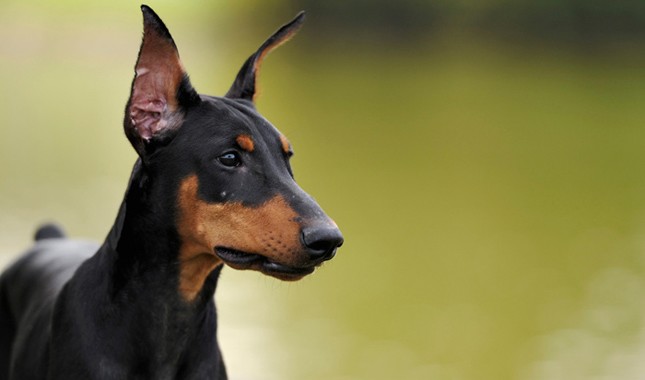 How to Train a Doberman Pinscher

Want to learn how to train your Doberman Pinscher to be one of the best trained dogs? Click here to find out how.

About the Doberman Pinscher

Dobermans are compactly built dogs—muscular, fast, and powerful—standing between 24 to 28 inches at the shoulder. The body is sleek but substantial, and is covered with a glistening coat of black, blue, red, or fawn, with rust markings.

These elegant qualities, combined with a noble wedge-shaped head and an easy, athletic way of moving, have earned Dobermans a reputation as royalty in the canine kingdom. A well-conditioned Doberman on patrol will deter all but the most foolish intruder.

Since the invention of money, one thing has been certain at all times and in all places: The tax collector is never a welcome visitor. In certain precincts of 19th century Germany, the reception was downright hostile. All too aware of this was taxman and dog breeder Louis Dobermann, from the town of Apolda. He hoped to breed an imposing but dependable protector to accompany him on his rounds.

Dobermann’s handiwork was a larger, less refined version of the pinscher that today bears his name (minus an “n,” which was dropped somewhere along the way). Historians mention the Black and Tan Terrier (forerunner of the Manchester Terrier), German Pinscher, Rottweiler, and smooth-coated herding dogs among the components of Dobermann’s new breed.

The “Tax Collector’s Dog” quickly gained an international reputation as a working dog supreme. Dobes have excelled at police and military K-9 duty, as therapy dogs and service dogs for the disabled, as searchers and rescuers, and in competitive dog sports. During World War II, the U.S. Marine Corps Dobermans of the Pacific won the breed great fame. Twenty-five of these loyal “Devil Dogs” died during the battle for Guam.

With their muscular good looks and proud gait, Dobes are consistent winners in the ring. A Dobe named Storm won Westminster’s Best in Show two years running, 1952 and ’53. The Doberman Pinscher came to the AKC in 1908 and has since reigned as one of America’s most popular working breeds.

Feeding an excellent-quality dog food throughout his lifetime is critical for the Doberman. The Doberman puppy should be fed an age-appropriate diet approved by the dog’s breeder or veterinarian. Treats can be an important aid in training, but giving too many can cause obesity. Learn about which human foods are safe for dogs, and which are not. Check with your vet if you have any concerns about your dog’s weight or diet. Ample amounts of clean, fresh water should be available at all times.

The Doberman is an energetic athlete who needs a lot of exercise and free play. A Doberman will enjoy going for long daily walks or hikes with his owner, and having a large fenced area where he can run is vital for his physical and mental well-being. Participation in canine sports such as obedience, tracking, and agility will provide exercise for mind and body and fun times together for dog and owner.

Dobermans are very intelligent, learn easily, respond quickly, and make loving and fun companions. However, they are very strong dogs and can become pushy, destructive, and unmanageable if not raised properly. Socialization starting in puppyhood is imperative, as is obedience training. Puppy training classes are highly recommended as well. It is every Doberman owner’s responsibility to ensure that the dog is raised to be a happy, well-mannered companion and canine citizen. The Doberman should always live inside the home with his people, rather than outdoors.

Dobermans have a reputation as menacing security dogs, but that doesn’t mean they don’t have a soft spot for their two-legged pals. Learn more about the second best guard dog in the world.

Unlike some dogs that have been hanging around since ancient times, Dobermans are newer to the scene. The breed originated in Germany and began to take form in the early 1880s, making it less than 150 years old.

2. THEY WERE FIRST BRED BY A TAX COLLECTOR

Herr Karl Louis Dobermann was a man with many jobs: He was a tax collector, who would sometimes work as a police officer, night guard, and dog catcher. Because of his career, Dobermann often found himself traveling with bags of money through dangerous parts of town at late hours; it left him feeling uneasy. With his access to the pound, breeding a canine bodyguard to keep him—and his money—safe seemed like a natural decision. He wanted a medium sized dog that was refined but intimidating. The resulting dog is lean and muscular with dark fur and brown markings.

3. A LOT OF DOGS WENT INTO THE PROCESS

Dobermann did not take a lot of notes on his breeding process, so no one is exactly sure what breeds went into making the Doberman pinscher. However, some possible dogs believed to be in the mix include the Rottweiler, German Shorthaired Pointer, Weimaraner, Manchester Terrier, Beauceron, Great Dane, Black and Tan Terrier, and Greyhound.

Since these dogs were bred to be personal guards, they needed to be ready to engage in fights. Some owners would remove weak spots, the tail and ears which can be pulled or torn, to avoid potential altercations. Today, most Dobermans are no longer used for fighting purposes, but there are some health concerns to consider. Doberman tails are very thin and sensitive, and can break a lot easier than other dogs’. Additionally, floppy ears prevent air from easily flowing into the ear canals and can cause ear infections. Some owners will dock these appendages simply to avoid future injuries. But many see this process as cruel and unnecessary, and certain countries, included Australia and the U.K., have even banned the practice.

5. NO JOB IS TOO BIG FOR THESE DOGS

Dobermans are extremely athletic and intelligent dogs, so no task is out of their league. (And that includes the job of lap dog, even if you’re less enthused about it.) Dobies have been used for a variety of jobs and sports including police work, scent tracking, coursing, diving, search and rescue, therapy, and guiding the blind.

6. THEY CAN BE MOVIE STARS

The ‘70s had their share of hokey films, but 1972’s The Doberman Gang takes campy to the next level. The movie, as the trailer’s voiceover explains, is about “six savage Dobies with a thirst for cold cash that leaves banks bone dry.” The dogs are all named after famous bank robbers: Dillinger, Bonnie, Clyde, Pretty Boy Floyd, Baby Face Nelson, and Ma Barker. Using their persuasive barks and growls, these trained dogs manage to make off with heaps of money. If that concept seems silly to you, consider the fact that there were two sequels and talk of a remake as recently as 2010.

Kurt the Doberman was the first canine causality in the 1944 Battle of Guam during WWII. He went ahead of the troops and warned them of the approaching Japanese soldiers. Although an enemy grenade killed the brave dog, many soldiers were saved from the same fate because of his bravery. Kurt became the first of 25 war dogs to be buried in what is now known as the United States Marine Corps War Dog Cemetery on Guam.

A memorial featuring a bronze statue of Kurt has been erected in the cemetery, with the names of the 24 other dogs inscribed on the side. Artist Susan Bahary was asked to create it.

“To me, this is more subject, more about love, even though it is a war monument,” she said. “I hope that people can take a piece of love back when they see that piece. That they’ll feel the love we had for the dogs and that the dogs had for us.”

Dobermans are the fifth smartest breed and easily trained. That intelligence comes at a price—to their human friends. Dobermans are known for outsmarting their trainers and getting easily bored.

9. THERE HAVE BEEN DOBERMAN DRILL TEAMS

The first of many Doberman Drill Teams, started by Tess Henseler, performed at the 1959 Westminster KC dog show at Madison Square Garden in New York City. The groups performed at various celebrations and sporting events and showcased the dogs’ intelligence and superior agility. Later, Rosalie Alvarez formed her own team that toured for 30 years.

10. BREEDING IS MAKING THEM MORE GENTLE

Since Dobermans are transitioning from guard dogs to loving companions, breeders are moving them away from aggressive qualities. Although Dobies have a softer personality today, all dogs are different and a lot of their temperament is dependent on proper training. These dogs can be great with families and children, but only when correctly trained and socialized.

Want to learn how to train your Doberman Pinscher to be one of the best trained dogs? Click here to find out how.