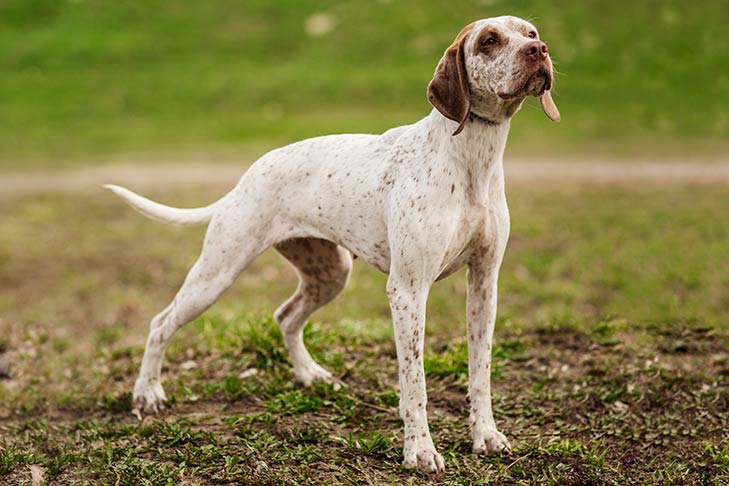 How To Train a Braque du Bourbonnais 

Pronounced brock-do-bor-bon-NAY, this pointer has a calm, gentle demeanor that is ideally suited for the foot hunter. The breed’s relatively small size and short coat well suits them as an ideal home companion for the family that hunts. The Bourbonnais is an ancient breed that evolved in France during the 15th century in the historic province of Bourbonnais. By the 1800s, the breed was known amongst French hunters as a tailless pointer with distinctive fawn and liver ticking. The Braque du Bourbonnais has now gained a strong foothold in North America; some years there are more pups registered in the United States than its homeland of France. In English, he is the Bourbonnais Pointing Dog. He is kind and affectionate in the home and a serious, adaptable, intelligent hunter in the field.

The Braque du Bourbonnais is an ancient breed. He is considered one of the most ancient pointers of the pointing breeds developed in France. The word “braque” is derived from a French verb meaning “to aim or point,” and as a noun can be translated as “pointer.” The breed was described in French literature as early as the late 1500s. Even then, the breed was known for its keen hunting instincts.

There are numerous French pointers and most experts agree that all these breeds originated from the same stock, the French Pointer, or Braque Francais. Each breed of pointer in France is named for the region in which they were developed: the Braque Saint Germain, which is the pointer from Saint Germain; the Braque d’Auvergne is the pointer from the Auvergne region; and the Braque du Bourbonnais from the province of Bourbon, a region of central France, just to name a few.

Today, French breeders strive to produce Bourbonnais that conforms to a breed standard, but of equal importance, Bourbonnais must now be proficient in the field as pointers, retrievers and trackers. Since the early 1970s, Bourbonnais breeders have substantially and rapidly improved the breed’s conformation and field performance.

After World War I, a group of dedicated breeders formed the first Club du Braque du Bourbonnais in 1925 with the goal of reviving the breed and to bring it back to its pre-war prominence. The first breed standard was published in the club’s first bulletin in 1930. Although the organization and these breeders made considerable progress, their efforts were again nearly wiped out by World War II. Also, the strict adherence to a naturally tailless dog and stringent color requirements resulted in a dog based on appearance rather than performance. Consequently, many breeders lost interest in the breed and no pups were registered from 1963 to 1973.

A second Club du Braque du Bourbonnais was created in 1982 by Michel Comte, with official recognition by the Society Centrale Canine (SCC), the French affiliate of the FCI, in 1985. The goal to revive the breed had been achieved, the breed standard was relaxed, spots and docked tails were considered acceptable and the breed’s noted hunting instincts restored. The new breed standard was fully recognized by the SCC and FCI in 1991. The standard was then translated and published on the FCI website in 1998.

Most Bourbonnais Pointing Dogs are healthy dogs. Working with a responsible breeder, those wishing to own a Braque du Bourbonnais can gain the education they need to know about specific health concerns within the breed. Good breeders utilize health screening and genetic testing of their breeding stock to reduce the likelihood of disease in their puppies.

The Braque du Bourbonnais has a fine, dense, short coat. It is a little coarser, and sometimes longer, on the back. On the head and ears, the hair is finer and shorter. Beyond periodic brushing, the occasional bath will keep your Braque du Bourbonnais clean and looking his best. Grooming can be a wonderful bonding experience for you and your dog. The breed’s strong, fast-growing nails should be trimmed regularly with a nail clipper or grinder to avoid overgrowth, splitting and cracking. Ears should be checked regularly to avoid a buildup of wax and debris, which can result in infection. Teeth should be brushed regularly.

Options for exercise could include play time in the backyard, preferably fenced, or being taken for walks several times a day. Exercise can also come in the form of indoor activities, like hide-and-seek, chasing a ball rolled along the floor, or learning new tricks. Certain outdoor activities like swimming, hiking, and retrieving balls or flying discs can provide a good outlet for expending energy. Training for dog sports like agility, obedience and rally can also be a great way to give your dog exercise.

The Braque du Bourbonnais requires relatively gentle handling. He has the ability to sense the mood of the handler, seeking eye contact at all times.

The Braque du Bourbonnais should do well on a high-quality dog food, whether commercially manufactured or home-prepared with your veterinarian’s supervision and approval. Any diet should be appropriate to the dog’s age (puppy, adult, or senior). Some dogs are prone to getting overweight, so watch your dog’s calorie consumption and weight level. Treats can be an important aid in training, but giving too many can cause obesity. Learn about which human foods are safe for dogs, and which are not. Check with your vet if you have any concerns about your dog’s weight or diet. Clean, fresh water should be available at all times.