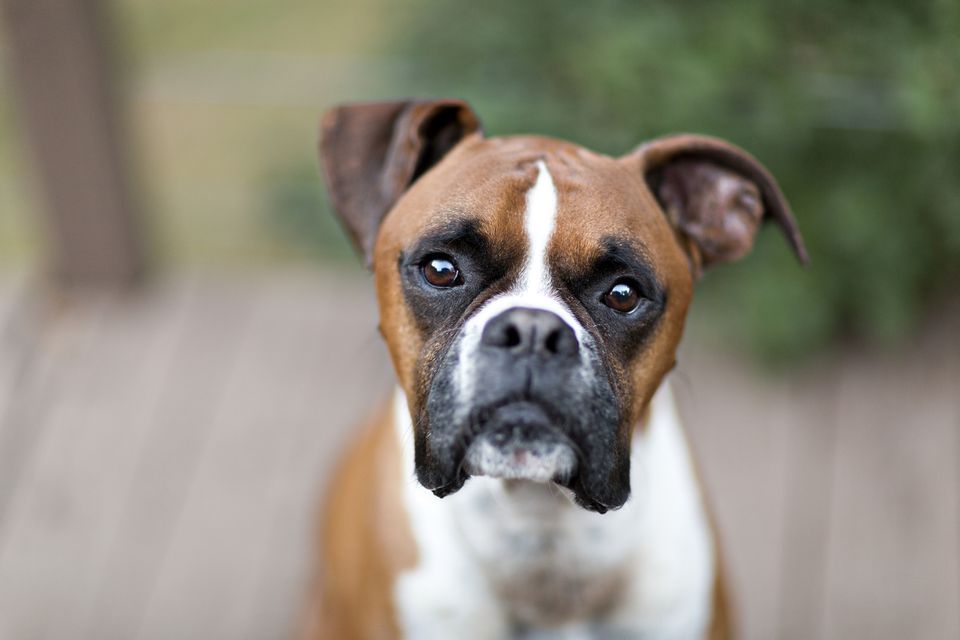 How to Train a Boxer

Want to learn how to train your Boxer to be one of the best trained dogs? Click here to find out how.

A well-made Boxer in peak condition is an awesome sight. A male can stand as high as 25 inches at the shoulder; females run smaller. Their muscles ripple beneath a short, tight-fitting coat. The dark brown eyes and wrinkled forehead give the face an alert, curious look. The coat can be fawn or brindle, with white markings. Boxers move like the athletes they are named for: smooth and graceful, with a powerful forward thrust.

Boxers are upbeat and playful. Their patience and protective nature have earned them a reputation as a great dog with children. They take the jobs of watchdog and family guardian seriously and will meet threats fearlessly. Boxers do best when exposed to a lot of people and other animals in early puppyhood.

The Boxer’s ancestors, the war dogs of the Assyrian empire, go back as far as 2,500 B.C. But what we think of today as a Boxer can be traced to Germany of the late 1800s and early 20th century. The breed is thought to have been bred down by German dog fanciers from a larger, heavier German breed called the Bullenbeisser (“bull biter”).

In medieval times the Bullenbeisser was Germany’s premier big-game hunter, used by noblemen to run down, catch, and hold such formidable opponents as bear, bison, and wild boar on vast ducal estates. By the early 1800s, the political situation in the German states was changing. German nobles were out of favor. Their estates were broken up, and the cherished tradition of lavishly appointed boar hunts came to an end. By 1865, the mighty Bullenbeisser was out of a job.

Through judicious crosses to a smaller, mastiff-type breed from England, the obsolete big-game hunter gained a new lease on life. By the late 1800s, the modern Boxer—a sleeker, more elegant dog—had come into focus. (The English name Boxer refers to the way the breed spars, like a prizefighter, with their front paws when playing or defending themselves.)

Over the years, Boxers have done many jobs: athlete, cattle dog, police dog, war dog (in both world wars), watchdog, protection dog, and guide dog for the blind. The AKC registered its first Boxer in 1904, but the breed’s U.S. heyday began in the 1950s, when a Westminster-winning Boxer named Bang Away became a national celebrity. Since that time, Boxers have reigned as one of America’s top 10 most popular breeds.

The Boxer should do well on a high-quality dog food, whether commercially manufactured or home-prepared with your veterinarian’s supervision and approval. Any diet should be appropriate to the dog’s age (puppy, adult, or senior). Some dogs are prone to getting overweight, so watch your dog’s calorie consumption and weight level. Treats can be an important aid in training, but giving too many can cause obesity. Learn about which human foods are safe for dogs, and which are not. Check with your vet if you have any concerns about your dog’s weight or diet. Clean, fresh water should be available at all times.

Boxers are very playful, high-energy dogs. They need ample exercise every day, on leash or in a securely fenced area. The Boxer must never be allowed to run loose. The breed’s heritage as a chaser of wild game means that they spend a good deal of time jumping and leaping about—as young dogs, they are constantly in need of reminders to teach them to stay “down.” Because the Boxer is a powerful, active, and playful dog, he may not be the best choice for a very frail adult, nor for a small child who could be overwhelmed by a well-meaning but bouncy puppy.

Early socialization and puppy training classes are vital in channeling the breed’s energy and exuberance in a positive way. Boxers are highly intelligent, but can become bored with repetition. They tend to have a mind of their own and are excellent problem solvers. Not always tolerant of other dogs of the same sex, most Boxers of opposite sexes enjoy each other’s company. Boxers excel in a wide range of canine sports, including obedience, agility, and herding, and they perform brilliantly as service, assistance, and therapy dogs, and in roles such as drug detection and search-and-rescue.

Want to learn how to train your Boxer to be one of the best trained dogs? Click here to find out how.