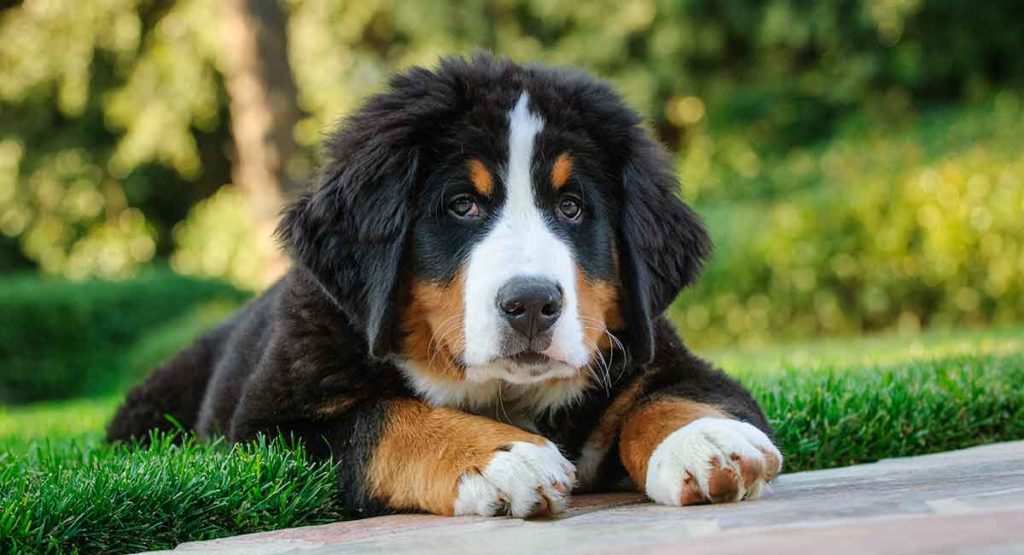 How to train a Bernese Mountain Dog

Want to learn how to train your Bernese Mountain Dog to be one of the best-trained dogs? Click here to find out how.

About the Bernese Mountain Dog

The Bernese Mountain Dog is a large, sturdy worker who can stand over 27 inches at the shoulder. The thick, silky, and moderately long coat is tricolored: jet black, clear white, and rust. The distinctive markings on the coat and face are breed hallmarks and, combined with the intelligent gleam in the dark eyes, add to the Berner’s aura of majestic nobility. A hardy dog who thrives in cold weather, the Berner’s brain and brawn helped him multitask on the farms and pastures of Switzerland.

Berners get along with the entire family and are particularly gentle with children, but they will often become more attached to one lucky human. Berners are imposing but not threatening, and they maintain an aloof dignity with strangers.

The Bernese Mountain Dog is one of four mountain-dog breeds who were long at home in the canton of Bern, a vast agricultural region vital to the dairy production required for two of Switzerland’s most profitable exports: chocolate and cheese. Even today, Bern’s website tells us, “Over 12,000 farms are spread over the canton’s valleys, hills, and mountain areas.”

Berners earned their keep by droving cattle, guarding farmyards from predators, and serving as gentle companions when the hard work of the day was done. Perhaps their greatest claim to working-dog fame is their ability to pull many times their own weight as drafting dogs, with their broad and muscular hindquarters generating immense strength.

Despite the breed’s great utility in the days before mechanized farming and ranching, by the late 1800s the Berner’s numbers were dwindling and the quality of the surviving dogs left something to be desired. A painstaking effort was begun by Swiss fanciers to reverse the breed’s decline.

In 1907, a Swiss breed club was formed under the leadership of Professor Albert Heim, perhaps the most respected European dog man of his generation. Before long, Berners were once again a favored farm dog, and they also caught on as companions with Swiss householders.

The breed’s American history began in 1926, when a Kansas farmer imported a pair as all-around farm dogs. They caught on quickly, and the AKC registered its first Berner in 1937. Today, the Bernese Mountain Dog Club of America sponsors drafting and carting events that test the working ability of these majestic mountaineers.

The Bernese Mountain Dog should do well on a high-quality dog food, whether commercially manufactured or home-prepared with your veterinarian’s supervision and approval. Any diet should be appropriate to the dog’s age (puppy, adult, or senior). Some dogs are prone to getting overweight, so watch your dog’s calorie consumption and weight level. Treats can be an important aid in training, but giving too many can cause obesity. Learn about which human foods are safe for dogs, and which are not. Check with your vet if you have any concerns about your dog’s weight or diet. Clean, fresh water should be available at all times.

The Bernese Mountain Dog has a double coat, with a longer outer coat and a wooly undercoat. Berners shed a fair amount, even more so during shedding season, which occurs twice a year. Weekly brushing—daily during shedding season—will help to remove loose hair and keep the dog looking his best. Any tangles can be worked out with a slicker brush or metal comb. As with all breeds, the nails should be trimmed regularly, as overly long nails can cause the dog pain and structural problems.

Berners earned their keep by droving cattle, guarding farmyards from predators, and serving as gentle companions when the hard work of the day was done. Click To Tweet

Bernese Mountain Dogs need at least a half-hour of moderate exercise every day to stay healthy and happy. While they are definitely meant to live indoors with their human family, Berners enjoy outdoor activities and make great companions on long walks or hikes. Outdoorsy owners often take their canine companions camping and backpacking. Berners enjoy pulling young children in a cart, and some even participate in carting and drafting competitions. Other canine sports in which Berners participate and excel include agility, herding, obedience, rally, and tracking.

Early socialization and obedience training are important for all dogs, but especially so for breeds as large as the Bernese Mountain Dog. Berners are intelligent and eager to please, so they are usually easy to train. They are also affectionate and openhearted; their feelings are easily hurt, and so they don’t respond well to harsh corrections or training methods. A Berner wants to be with his family, and undesirable behaviors can result if he is regularly left alone for long periods of time.

This charming dog from the Swiss Alps conjures up images of idyllic pastures in mountainside settings. Learn more about the draft dog and its heritage.

1. THEY HAIL FROM SWITZERLAND

Since the breed is so old, the details about its creation are a little slim. Some believe they came about when Romans brought mastiff-like dogs to Switzerland 2000 years ago. Others contest this theory, as the remains of large dogs have been found in Switzerland dating to before the Romans crossed the Alps. Unfortunately, there is very little art or literature to help shed any light. Berners are working dogs, and artists generally chose to put more glamorous hunting and lap dogs on the canvas.

2. THE NAME REFERS TO WHERE THE BREED IS FROM

Bernese mountain dogs get their name from the area where they were bred: Bern Canton, the central region of Switzerland.

Swiss mountain dogs, or Sennenhund, are large working dogs that originated in the Swiss Alps. They’re known for their stocky figure, calm temperament, and tri-color coat. Besides the Berner, the others are the Appenzeller, Entlebucher mountain dog, and Greater Swiss mountain dog. While they all look similar, only the Bernese mountain dog has the signature long flowing fur.

4. THEY WERE BRED AS WORKING DOGS

This powerful breed was developed to have strong legs to endure the rocky terrain of the mountains. Originally they were used as herding and guard dogs for farm families. Their friendly and calm personality makes them great companions as well.

In 1850, cheese plants started to open up, and producers wanted to move large shipments of food. The strong dogs would pull carts filled with dairy products and bread to different farms. Sometimes small children would accompany the dogs, but Berners were perfectly capable of doing it on their own.The trend of draft dogs caught on, and soon countries like Belgium, France, the Netherlands, and even Canada were using the dog-carts. While the canine-drawn carts were a necessity in the Alps, in other parts of the world they were used as a novelty.

These dogs are well-muscled and eager to please. They can haul up to 1000 pounds—10 times their own weight.

7. LOVE OF THE ST. BERNARD ALMOST WIPED OUT THE BERNER

In the late 1800s, the St. Bernard was the ‘It’ dog of Switzerland. As popularity for the big dog rose, people began to forget about the Swiss mountain dogs. Fanciers loved the St. Bernard’s uniform coloration and distinct origin. The Swiss Kennel Club started in 1883 and chose not to recognize any of the mountain dogs, opting to showcase instead the St. Bernard and other hounds of the region. Soon, only farmers in remote areas had use for the Bernese mountain dog and others of its kind. The breed would have been wiped out entirely if not for an innkeeper named Franz Schertenleib, who as a child had heard stories about the dog. He popularized the breed by promoting it across Switzerland and Europe.

8. CARTING CAN BE A SPORT

While there is no longer a need for cart-pulling canines, that doesn’t mean the dogs have lost for their love for it. Berner owners recognize that the dogs were bred to pull carts and come to life when they do it. The Bernese Mountain Dog Club of America holds a carting competition so Berners can show off their stuff.

Bernese mountain dogs mature a bit slower than other dogs, so they require consistent and patient training.

10. BERNERS HAVE A SENSE OF HUMOR

These floppy dogs love making their owners happy and often respond well to laughter. If they find a particular antic or action will make their owners laugh, they’re sure to repeat it. One book refers to this as the “Berner chuckle.”

Want to learn how to train your Bernese Mountain Dog to be one of the best-trained dogs? Click here to find out how.