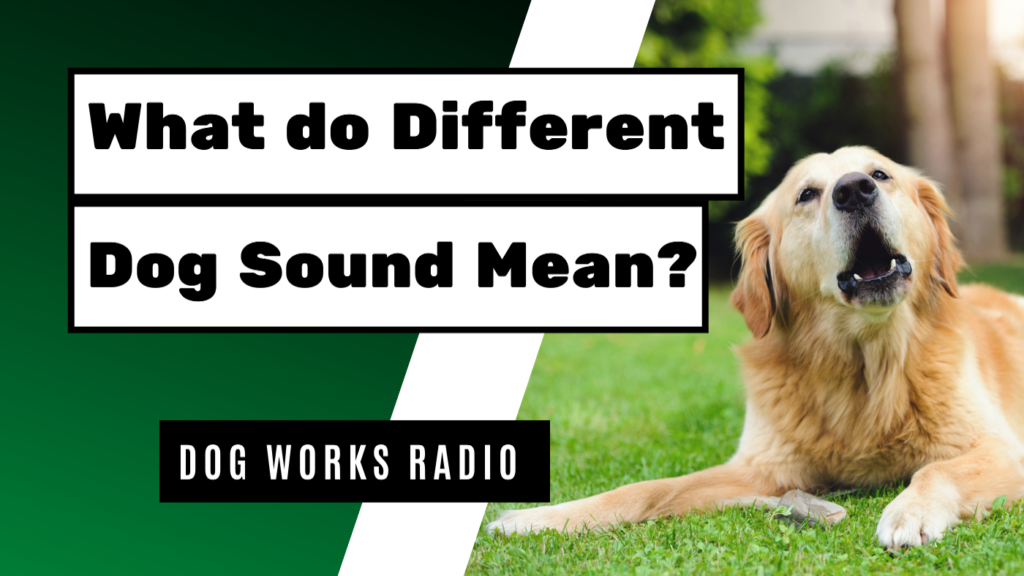 What do different dog sounds mean?

Dogs are surprisingly good at communicating with people, considering they can’t speak. They use body language and vocalization to express their wants, needs, and fears, but sometimes it is hard to figure out what dog sounds actually mean.

Did you know that we have a team of sled dogs? There is nothing cooler than hearing them sing together under a full moon.  Some dogs have a wider range of vocalizations than others. Rottweilers “purr,” Siberian Huskies “talk,” Shiba Inus “scream,” and Basenjis “yodel” instead of barking. For the most part, however, dogs use the following sounds to express a pretty wide array of meanings:

Dogs bark. Some dog breeds bark more than others, and some dogs’ barks are deep and intimidating, while others have high-pitched yaps. Your dog’s bark can indicate joy or fear, anger or awareness, frustration or need. The trick to interpreting a bark is context — and experience.

A dog that barks when you get home, wags her tail, and bounces around with her favorite toy is probably telling you she is happy to see you. A dog in your neighbor’s yard that runs along the fence, snarling and barking when you get too close, however, is probably letting you know that this is her territory, and you are not welcome. If your dog barks when someone knocks on the door, she is telling you that there is someone there. Her bark might be excited, if she is the sort of dog that loves people, or downright angry, if she has a stronger, “stranger-danger” instinct. You will get better at interpreting dog barking by observing when your dog barks, the different types of bark she has, and what else her body is doing. Your dog’s bark pitch can also indicate emotion. A high-pitched bark is welcoming, whereas a lower-pitched bark indicates a threat.

The whine is almost as versatile as the bark, but less assertive. Dogs typically whine when they want something, like food, a toy, or attention. A dog that whines at the door may want to go outside, and a dog that whines while lying next to her leash could be hoping you will take her for a walk.

Whining can also show anxiety or fear. A dog with separation anxiety may whine when left alone, and a dog with a fear of going to the veterinarian may whine in the lobby. Dogs also show pain through whining. If your dog seems uncomfortable, is panting and whining, and his behavior or appetite has changed, he could be whining in pain. As with barking, the trick is figuring out the context surrounding the whine.

At first glance, the growl seems straightforward. Growls can mean “stay back,” “stop touching me,” or “I will bite you if you come closer.” Of course, in play, a growl can also mean, “look how very dead I have made this rope toy, pull harder!”

We respect growls when we hear them. Growls are a warning, and dogs that are punished too often for growling may decide to just skip to the next warning level — the bite. Growls and snarls are intentionally intimidating. Over time, you may learn your dog’s growls, as well as you know his barks. A low rumble can mean he heard something outside. A solid growl may mean, “I would like you to stop touching me, but I won’t bite you,” and a snarl that shows all of his teeth might be his way of saying, “I really don’t like that dog or person, and I may bite if given the opportunity.”

Many dogs never howl. Some breeds, such as Siberian Huskies, however, howl regularly and even use their howl to “talk,” making strange and often amusing noises as they express joy, curiosity, frustration, and sometimes emotions that seem totally alien to us.

THE SIGH AND THE GROAN

Dogs sigh and groan to show contentment and disappointment. Puppies moan and groan when they are settling down for a nap, and adults may sigh as they relax in your lap or on their dog beds. If your dog pesters you to play or go for a walk, however, and then flops down on the ground and lets out a long sigh or groan, she could be disappointed that she has not gotten what she wants.

It is tempting to compare human sounds and dog sounds, which can be confusing. For instance, dogs typically yawn when they are nervous, not tired, but when it comes to the sigh, we seem to be on the same wavelength. Think about the last time you settled onto a particularly comfortable couch. Did you sigh in contentment? Or what about a moment when things didn’t go your way — did you let out a sigh or groan of disappointment or exasperation?

We can learn the meaning of dog sounds by observing our canine companions to see what seems to trigger these sounds. If your dog has behavioral problems associated with sounds, it may be a good idea to consult your veterinarian or a trained animal behaviorist to figure out the underlying issue and how to correct it.