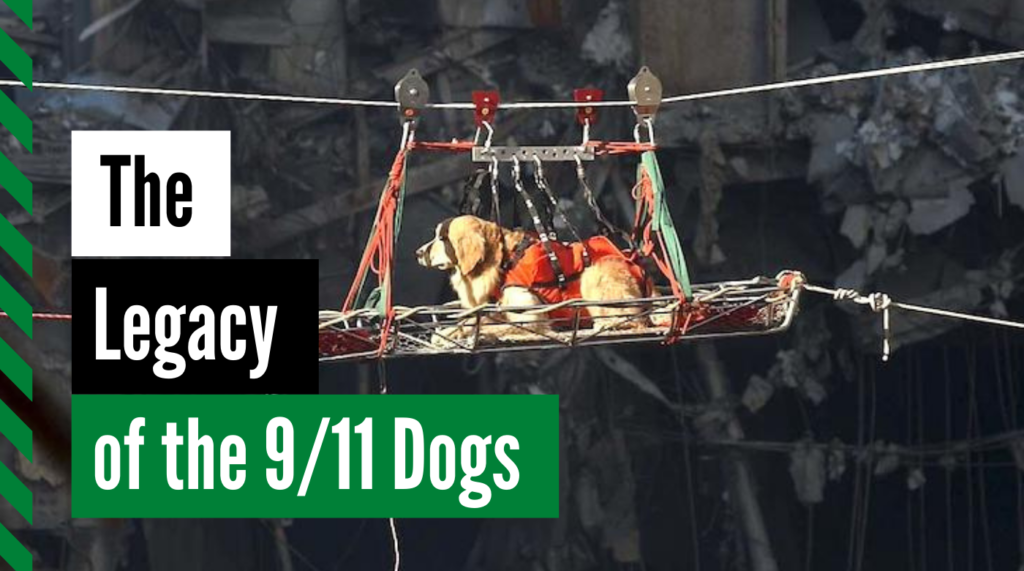 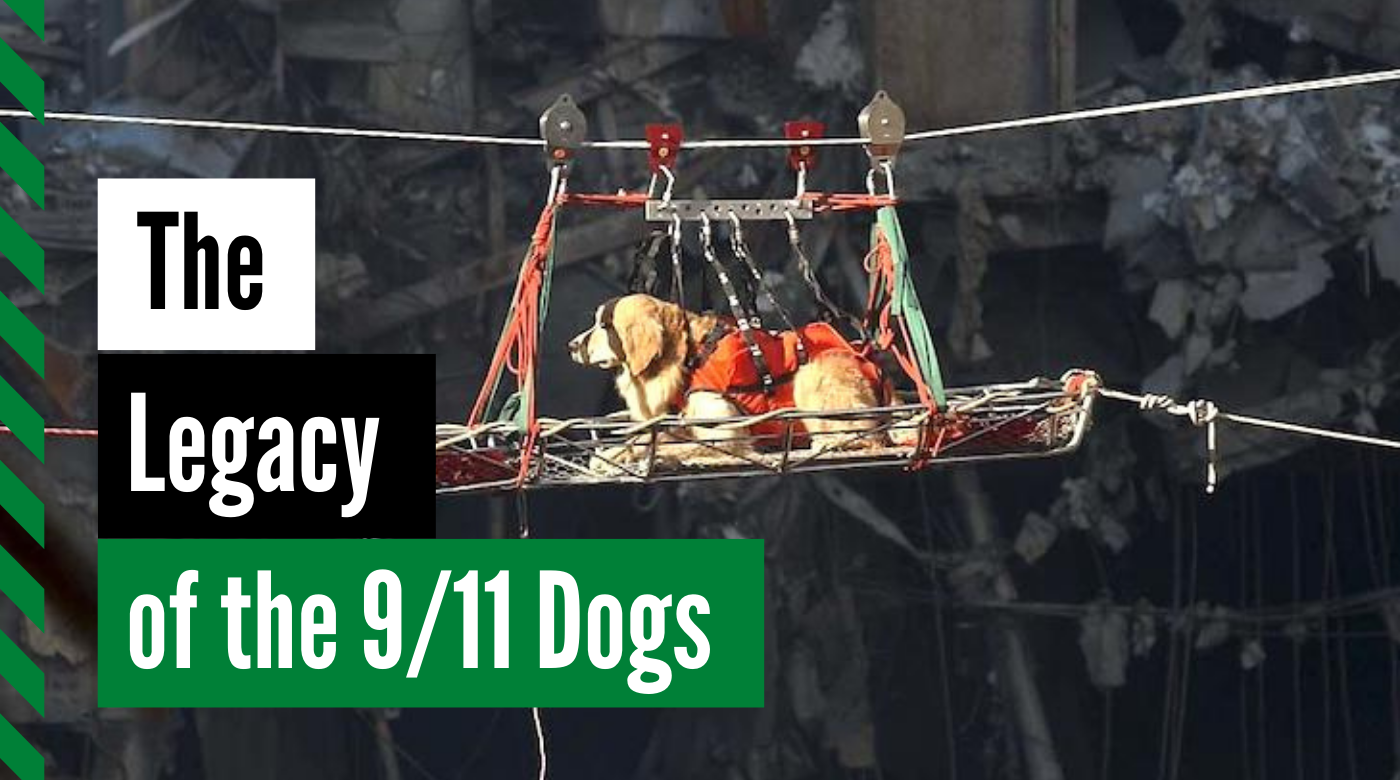 This week marks the 20th anniversary of the September 11th terrorist attacks. If you are like me the memory of where you were when you heard the news is seared into your memory. It seems like yesterday doesn’t it? Ten years ago, this week we aired an episode, right here on the podcast of the radio transmissions of the 911 calls and other radio traffic during the minutes after the planes struck. No commentary, just a mix of the chilling sounds of the transmissions. We did not do this for sensationalism but rather for a reminder of what we all went through and our fortitude to never let something like that again.

We came together as a nation right after 9/11. A time like we never have in this country. One could argue that we may never be that strong again, but others see us stronger than before. A small part of what allowed us to heal after the attacks were the stories of the canine heroes that helped out after the disaster and how many of these dogs, and the jobs they performed changed how we think about working dogs today. That is the topic of today’s episode, The Legacy of 9/11 Dogs.

On today’s show we are talking about the legacy of 9/11 dogs, what place they hold in our country’s history and how their work helped shape how we think of working dogs, two decades later. We have mentioned many times on the podcast, our own 9/11 dogs. They did not help in the disaster, but they sure touched the lives of many. You see, they were born on September 11, 2011, and we named the litter of puppies after some of the dogs that worked during the disaster. We have Tikva, Apollo, Hansen, BreBre, Salty and Sirius. BreBre was named after arguably the most famous of the disaster working dogs, Bretange, and our Bre is a service dog that works with a young man. She is a very special dog. She has even saved this young man’s life a couple of times. The others in our 9/11 crew are sled dogs and live with us here in the wilds of Alaska and are a part of Team Ineka. They are getting up there in age, but they are a reminder every day of the canine heroes from the 9-11 disaster. 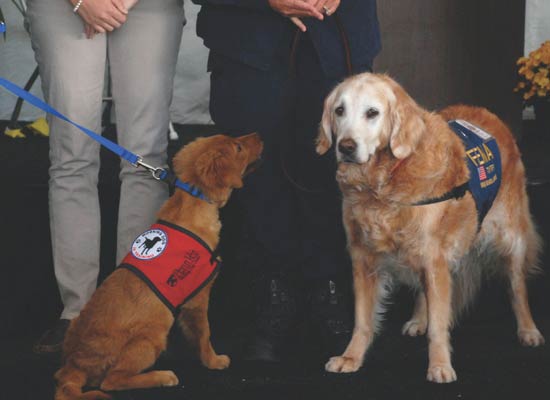 Back to Bretange, there is a photo on this podcast’s show notes over on Dog Works Radio from 2012, that is one of unbearable sweetness. Two Golden Retrievers are standing together, one with a gray muzzle, the other a puppy, both wearing vests signifying that they are working dogs.

The older dog is Bretagne, one of the heroes of Ground Zero. Nearly 15 years after the event, she was still making headlines. In August 2015, media carried the story of a happy occasion—her 16th birthday, in which she and her handler Denise Corliss, members of Texas Task Force 1, were feted in New York City. In June 2016, sadder headlines told of her death, just shy of the great old age of 17.

The puppy in the picture is also Bretagne, named in honor of the 9/11 sniffing celebrity. She is one small part of the legacy of Bretagne and all the other dogs who helped through those dark days, whether they were searching the ruins or easing unimaginable grief.

Young Bretagne, trained to detect blood sugar fluctuations in a diabetic patient, is a graduate of a training school—the Penn Vet Working Dog Center. This training school is the brainchild of Dr. Cynthia M. Otto, a veterinarian who worked at Ground Zero.

Otto says that the work of the dogs in that terrible time made her facility possible.

Sniffer dogs had been around for decades, but the public had little understanding of what they could do. “There was some sense that they might be able to find a lost Boy Scout in the woods but nothing of the scope and impact of a national disaster [even though they had a critical role in the Oklahoma City bombing and several natural disasters],” says Otto. 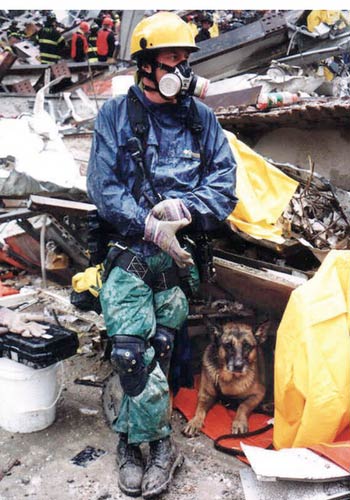 Media coverage of 9/11 focused on the dogs as the one “ray of sunshine” in a bleak landscape, she says.

Images of these dogs working tirelessly, doing whatever was needed to get the job done, captured hearts and minds all over the world. Photos, such as the iconic one of Golden Retriever Riley of FEMA’s Pennsylvania Task Force 1, moved people to action.

Otto says that many dog owners were inspired to pursue search-and-rescue certification because of those images.

The performance of the dogs on 9/11 also sparked serious study of the effects of this kind of work on canine bodies and minds, Otto says. “We were able to conduct our longitudinal study of the dogs as a result of the generous funding of the AKC Canine Health Foundation.”

One of those organizations is the nonprofit National Disaster Search Dog Foundation, a group founded in 1995 by a retired teacher, Wilma Melville.

After her first deployment—the Oklahoma City bombing, in 1995—Melville recognized a need for more dogs specifically trained for this kind of work and founded the NSDF. The organization scours shelters, looking for dogs with search and rescue potential, and prepares them for jobs with fire departments. The training costs about $10,000. NSDF provides the dogs free of charge. 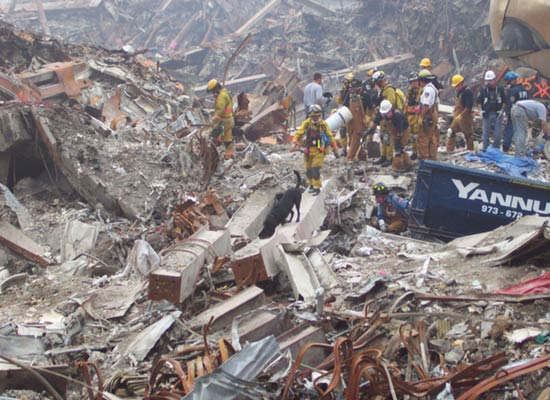 “Most people in this country had never heard of disaster search dogs [before 9/11],” says NSDF Executive Director Debra Tosch. When the news media started focusing on the dogs at Ground Zero, she says, “public knowledge really exploded.”

Tosch, and her SDF-trained black Labrador Retriever, Abby, were among the FEMA-certified canine search specialists, part of California Task Force 1, at the World Trade Center.

About 300 search teams, she estimated, responded. Only about 100 were prepared for a disaster of monstrous proportions in a major city. Many were wilderness search and rescue dogs, experts at finding people missing in the woods. They could not cope with the enormous mound of twisted metal, glass, and smoldering rubble and the urban noises.

Tosch says that some television coverage listed NSDF’s phone number. Donations started to pour in. “We had this influx of funding right after the World Trade Center,” Tosch says. The support and publicity helped make Melville’s 20-year dream—the National Training Center, slated to open on September 24—a reality. It’s designed to give canine candidates the opportunity to practice on a variety of simulated disaster sites.

The notion that dogs have the power to ease human emotional suffering is not new. Anyone who’s cried in the presence of a canine companion knows that. Smoky, a 4-pound Yorkshire Terrier, is credited with being the first therapy dog, cheering wounded soldiers in hospitals on the islands around New Guinea during World War II. 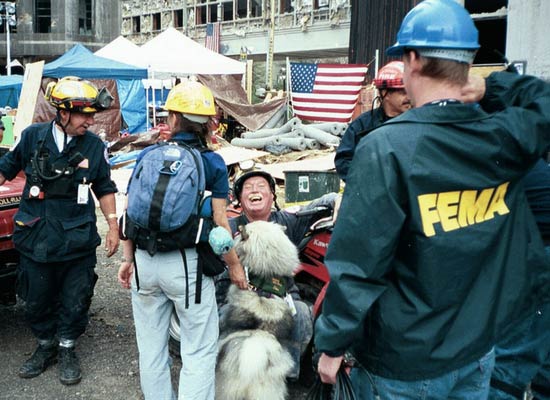 After that experience, Ehlers got a Keeshond puppy she named Tikva, and trained her for crisis-response work. She also started an organization that is today the HOPE Animal-Assisted Crisis Response, in Eugene, Oregon.

On 9/11, Ehlers and Tikva traveled to New York. Dealing with such enormous waves of grief, fear, and confusion goes way beyond what is required of a therapy dog who visits hospitals and nursing homes. Ehlers says she saw some become too stressed to work.

Most teams stayed at the Family Assistance Centers, helping the relatives of the dead and missing. Red Cross mental-health experts saw that workers were not talking to the human therapists and thought maybe they would talk to the dogs. Tikva, because of her crisis-relief training, became one of the few dogs who worked at Ground Zero helping the responders. Her preparation for working in this environment, as well as her cute looks, rock-solid temperament, and unusual breed, made her ideal for taking minds off the horror, if just for a few moments.

Ehlers says that that was where these four-legged therapists earned the sobriquet that they are known by now. “A firefighter called up V-Mat [Veterinary Medical Assistance Teams] after we left and said, ‘Where are those comfort dogs? They’re the only thing that helps me get through the day.”

A new era for therapy dogs opened on 9/11, says Ursula Kempe, president of Therapy Dogs International, which she co-founded in the mid-1970s. TDI sent 100 teams to New York, where they worked at the Family Assistance Center on Pier 94 and 50 at the Pentagon. They spent about four weeks there. Kempe says that most of the dogs rose to the challenge, but some could not handle it.

“While this was still going on, I called a meeting at TDI and asked everyone who was involved if they wanted to come. We all realized—really there was absolutely no dissention—we are not prepared for that, as therapy-dog handlers.”

TDI tightened its criteria, requiring additional preparation for the human handlers and special certification for dogs participating in disaster relief. Since then, TDI teams have helped people cope with all kinds of disasters, from Hurricane Katrina to mass shootings to acts of terrorism.

Kempe says the way the world views working dogs has come a long way, but improvements are still needed. For example, only service dogs can travel by plane in the cabin with their owners. Kempe is trying to persuade airlines to allow disaster-relief comfort dogs to do the same. This one change, she says, would bring many more dogs to places where they are needed. Handlers are reluctant to transport their canine partners in baggage.

The Future of Working Dogs

Otto believes that the need for dogs trained for all kinds of serious work is going to soar in the future, and more funding, facilities, and people willing to become handlers are desperately needed. Already, given all that they do, she says, “there is a shortage of dogs and funds to support them as well as the research to keep them healthy and performing optimally.” 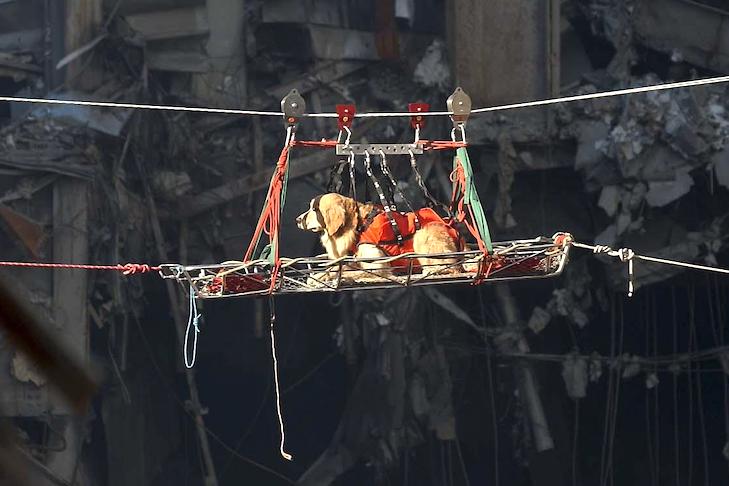 The experts also say that there is no way to predict what the future needs will be and how dogs will contribute to keeping us safe and helping people recover from a horror like the events of 20 years ago.

“People are realizing all of the different ways we can use these K-9s,” Tosch says. “We’re only limited by our imagination.”

You may have heard that President Biden just recently signed into law the PAWS Act which is going to be a pilot program to help veterans that faced the ravages of more than two decades of war that was spurred on by the events of 9/11 with training and placement of PTSD service dogs. This is an awesome step in helping our soldiers get the help they need in the way of service dogs. We here at Alaska Dog Works are still thinking of ways that we can give back with our Lead Dog Service Dog Program as well. Over the last few years, we have trained several service dogs for veterans working with a local non-profit veterans’ group and they covered all of the cost of the training for the dog. We hope to continue that relationship into the future.

Before we go, what do you guys think about the legacy of these 9-11 disaster canine hero’s and their legacy over the last 20 years? Did you name your dog after one of these canine heroes? We would love to hear their stories in the comments section on our social media channels. Just search Dog Works Radio.