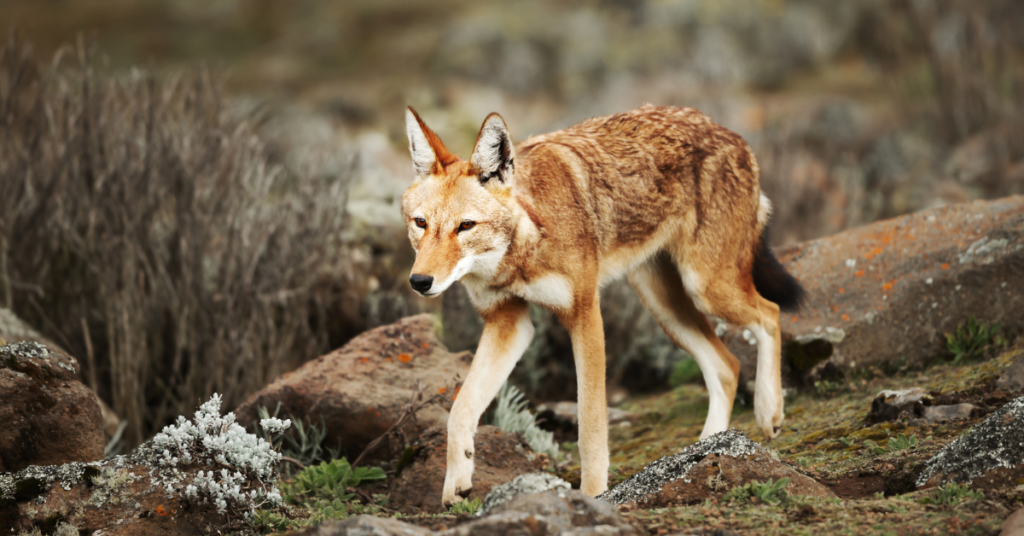 The 5 Most Endangered Canine Species

Domesticated dogs are some of the most popular animals on the planet, but their cousins in the wild aren’t always as beloved. For thousands of years humans have persecuted wolves, jackals, dingoes, foxes and other members of the family Canidae, pushing many species into or close to extinction. Here are five of the most endangered canine species and subspecies, three of which only continue to exist because a few people and organizations have taken extraordinary efforts to save them.

Ethiopian wolves (Canis simensis) don’t have the smallest population on this list—estimates put the species at 450 to 500 individuals—but looking at that number alone hides the true circumstances of these rare canids. The animals live in six fragmented population groups, some with fewer than 25 wolves, all of which are scattered hundreds of kilometers apart from one another. Few Ethiopian wolves are able to travel from one pack to another, so the species is at a high risk of inbreeding according to several studies. Meanwhile the wolves face continued persecution from livestock owners, reduced prey levels, diseases from domesticated dogs and a rapidly growing human population. Luckily the wolves’ biggest subpopulations live in protected areas, and efforts are underway to establish a new national park that will protect them even further, but we have already seen one subpopulation die out in the past decade, and it’s likely we’ll lose one or two more in the coming years.

The Ethiopian Wolf Conservation Programme has the best information on current efforts to preserve this rare species.

Once hunted into near extinction as a supposed threat to cattle and other livestock, Mexican gray wolves (Canis lupus baileyi) currently live in a sort of limbo. All of the wolves alive today are descended from just five animals captured in 1973 to prevent the subspecies from disappearing. About 300 wolves live in captive-breeding facilities in the U.S. and Mexico. Roughly 60 more have been released into the wild where they are defined as a “nonessential experimental population,” a status that affords them only partial protection. All remaining Mexican gray wolves have very limited genetics and continued breeding of both captive and wild wolves must be done carefully to preserve their scant genetic diversity. Even though the wild population breeds on its own, dozens of the released wolves have been killed by cars or hunters, making every animal that remains all that more precious.

The U.S. Fish and Wildlife Service’s (FWS) Mexican Gray Wolf Recovery Program has details on the efforts to preserve this subspecies.

The rarest wolf species, red wolves (Canis rufus) almost went extinct by the middle of the 20th century. First, they were nearly eradicated in order to protect livestock. Then coyotes started moving into their territory, where they hybridized with the wolves. By the time the last red wolves were brought into captivity in 1973, only 14 pure individuals remained. Today that population has increased to nearly 200 wolves living in captive-breeding centers and about another 120 in the wild in northeastern North Carolina. Like Mexican gray wolves, that wild population is classified as an experimental nonessential population. Also, like their Mexican relatives, the wild population has been heavily hit by illegal hunting, with at least 10 animals killed since the beginning of 2012. Those deaths bear heavy penalties under the Endangered Species Act, and the FWS is seeking information on anyone responsible for the killings.

For more information on these rare wolves, visit the Red Wolf Recovery Program or Friends of the Red Wolf.

Our final two “most endangered canines” come to us from the fox family.

First up is the critically endangered Darwin’s fox (Lycalopex fulvipes). Native to Chile, 250 of the 320 members of the species can be found on the 8,400-square-kilometer Chiloé Island. The remaining 70 live on the mainland at just one site, the 68-square-kilometer Nahuelbuta National Park. This secondary population, which was only discovered about 20 years ago, is obviously the more fragile of the two. The park is frequently visited by tourists and the foxes have become habituated to their presence, leaving the animals vulnerable both to cars and the dogs that humans bring with them. The population on Chiloé Island is a bit safer, especially within the island’s two national parks, but elsewhere on the island they still face a small amount of poaching as well as habitat loss from logging and development. Unlike a lot of other critically endangered species, though, the scientific consensus seems to be that these rare foxes are relatively safe and their population is stable.

Let’s end this list with a success story, albeit one that comes just in the nick of time.

It’s almost unfair to list to the island fox (Urocyon littoralis) as just one entry on this list. It’s not really one species: it is actually six different subspecies, each of which lives on its own island off the California coast. These foxes have been hard hit by distemper, mostly affecting the foxes on Catalina Island, and an incursion of golden eagles (Aquila chrysaetos), massive birds that see the tiny, cat-size canines as easy prey. Golden eagles didn’t used to visit California’s Channel Islands often, but the decline of the bald eagle (Haliaeetus leucocephalus) in the 1960s allowed the birds to expand their territory. As a direct result, four of the six island fox subspecies were nearly wiped out during the 1990s. By the year 2000 the San Miguel Island fox and the Santa Rosa Island fox had each declined to just 15 individuals. The Santa Cruz Island fox had just 80 individuals and the Santa Catalina Island fox wasn’t far behind at 103 animals.

But that decline—more than 99 percent for some of the subspecies—kicked conservation efforts into high gear. The National Park Service (NPS) and the Catalina Island Conservancy caught all the remaining animals and started captive breeding programs while the NPS relocated the golden eagles. The Nature Conservancy, which co-owns the islands with the Catalina Island Conservancy and the federal government, removed other threats such as feral goats and pigs. Vaccination plans and regular health checks were put into place to protect the foxes from diseases (originally carried to the island by domesticated dogs).

The efforts all worked. By 2011 four of the subspecies numbered in the hundreds, and two more (Santa Cruz and Santa Catalina) exceeded 1,300 and 1,500 individuals. FWS, meanwhile, has plans for a recovery program involving four of the six subspecies. For more information on this great success story, visit Friends of the Island Fox.

A few other canid species could end up on the next iteration of this list. The dhole, or Asiatic wild dog, (Cuon alpinus) continues to decline throughout its range, with an estimated 2,500 mature individuals spread across more than a dozen countries. The African wild dog (Lycaon pictus) confronts bleaker prospects; although the total population ranges as high as 6,600 adults, subpopulations number from as high as 276 individuals to as few as two. Luckily, though, most canine species appear to be relatively stable for now. Let’s hope that they can stay that way.