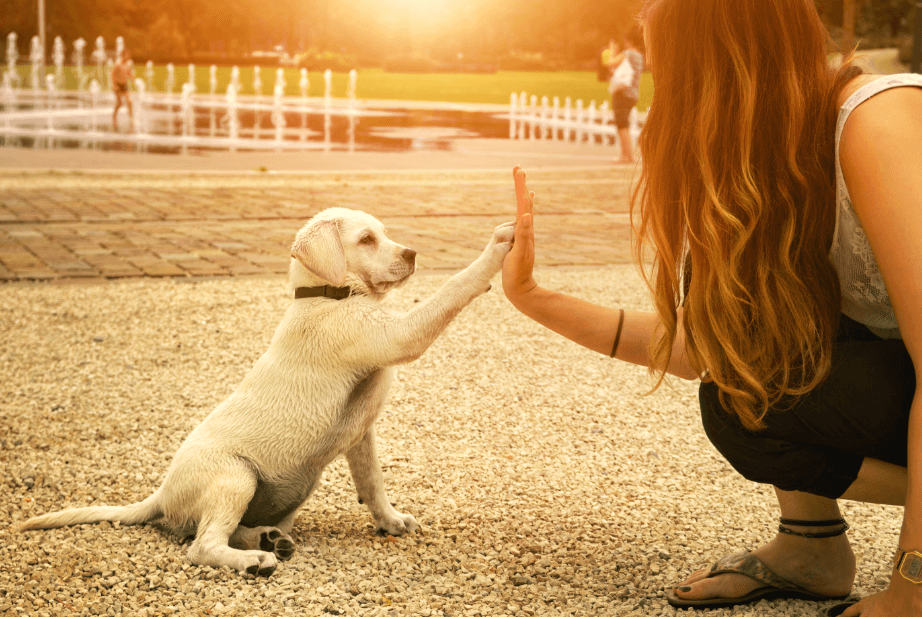 Teach Your Puppy These 5 Commands First

To start off on the right foot (and paw!) with your pup, he’ll need to know what you expect from him. This will make him feel secure in his ability to meet the goals laid out for him going forward.

The foundation of training should be based on positive reinforcement. Positive reinforcement is the process of giving a dog (or person!) a reward to encourage the behavior you want, like getting a pay check for going to work. The idea is not to bribe the behavior but to train it using something your dog values.  Avoid using punishment such as leash corrections or yelling. Punishment can cause a dog to become confused and unsure about what is being asked of him.  It is important to remember that we can’t expect dogs to know what they don’t know – just like you wouldn’t expect a 2-year-old child to know how to tie his shoes. Patience will go a long way in helping your new puppy learn how to behave.

Reinforcement can be anything your dog likes. Most people use small pieces of a “high value” food for training treats — something special — such as dried liver or even just their kibble. Lavish praise or the chance to play with a favorite toy can also be used as a reward. Dogs must be taught to like praise. If you give the dog a treat while saying “Good dog!” in a happy voice, he will learn that praise is a good thing and can be a reward. Some dogs also enjoy petting. Food is often the most convenient way to reinforce behavior.

Puppies can begin very simple training starting as soon as they come home, usually around 8 weeks old. Always keep training sessions brief — just 5 to 10 minutes —and always end on a positive note. If your puppy is having trouble learning a new behavior, end the session by reviewing something he already knows and give him plenty of praise and a big reward for his success. If your puppy gets bored or frustrated, it will ultimately be counterproductive to learning.

How To Teach A Dog To Come 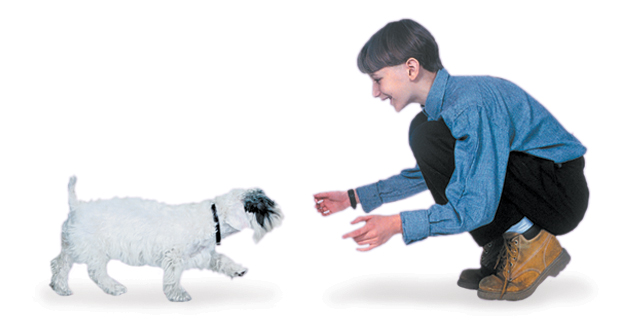 You’ll want to begin training a recall (come when called) in a quiet area and indoors. Sit with your puppy and say his name or the word “come.” Each time you say “come/name,” give your puppy a treat. He doesn’t have to do anything yet! Just repeat the word and give a treat. Easy!

Next, drop a treat on the floor near you. As soon as your puppy finishes the treat on the ground, say his name again. When he looks up, give him another treat. Repeat this a couple of times until you can begin tossing the treat a little further away, and he can turn around to face you when you say his name. Avoid repeating your puppy’s name; saying it too often when he doesn’t respond makes it easier for him to ignore it. Instead, move closer to your puppy and go back to a step where he can be successful at responding to his name the first time.

Once your puppy can turn around to face you, begin adding movement and making the game more fun! Toss a treat on the ground and take a few quick steps away while calling your puppy’s name. They should run after you because chase is fun! When they catch you, give them a lot of praise, treats or play with a tug toy. Coming to you should be fun! Continue building on these games with longer distances and in other locations. When training outside (always in a safe, enclosed area), it may be helpful to keep your puppy on a long leash at first.

To start off on the right foot (and paw!) with your pup, he’ll need to know what you expect from him. This will make him feel secure in his ability to meet the goals laid out for him going forward. Click To Tweet

When your puppy comes to you, don’t reach out and grab him. This can be confusing or frightening for some dogs. If your puppy is timid, kneel and face them sideways and offer him treats as you reach for the collar. Never call your dog to punish! This will only teach him that you are unpredictable, and it is a good idea to avoid you. Always reward your dog heavily for responding to his or her name, even if they have been up to mischief!

How To Teach a Dog Loose Leash Walking 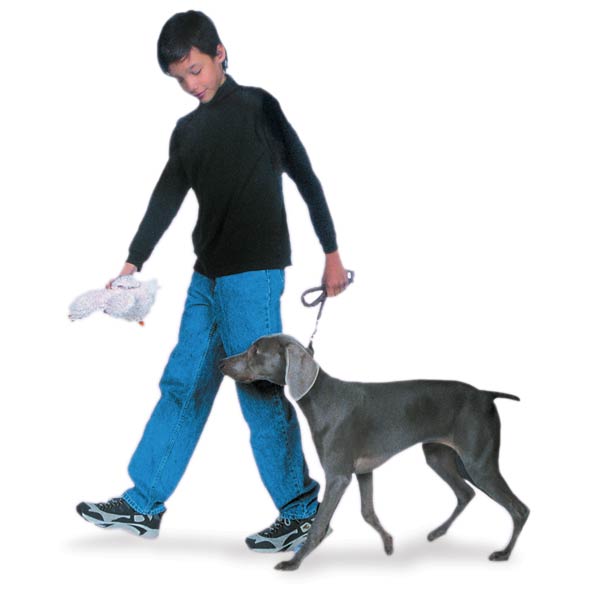 In competition obedience training, “heel” means the dog is walking on your left side with his head even with your knee while you hold the leash loosely. Puppy training can be a little more relaxed with the goal being that they walk politely on a loose leash without pulling. Some trainers prefer to say “let’s go” or “forward” instead of “heel” when they train this easy way of walking together.

Whatever cue you choose, be consistent and always use the same word. Whether your puppy walks on your left side or your right side is completely up to you. But be consistent about where you want them so they don’t get confused and learn to zig zag in front of you.

First, make sure your puppy is comfortable wearing a leash. This can feel strange at first, and some puppies may bite the leash. Give your puppy treats as you put the leash on each time. Then, stand next to your puppy with the leash in a loose loop and give him several treats in a row for standing or sitting next to your leg. Take one step forward and encourage him to follow by giving another treat as he catches up.

Continue giving treats to your puppy at the level of your knee or hip as you walk forward. When he runs in front of you, simply turn the opposite direction, call him to you, and reward him in place. Then continue. Gradually begin giving treats further apart (from every step to every other step, every third step, and so on).

Eventually your dog will walk happily at your side whenever he’s on his leash. Allow your dog plenty of time to sniff and “smell the roses” on your walks. When they’ve had their sniffing time, give the cue “Let’s Go!” in a happy voice and reward them for coming back into position and walking with you.

How To Teach a Dog To Sit 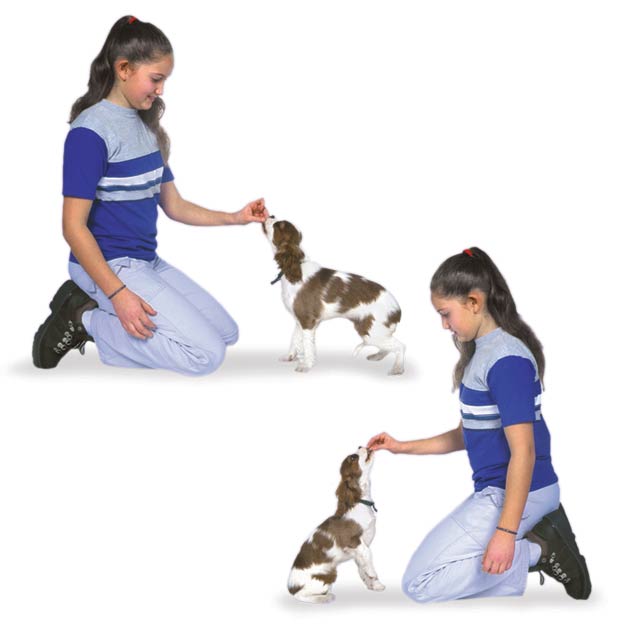 There are two different methods for showing your puppy what “sit” means.

The first method is called capturing. Stand in front of your puppy holding some of his dog food or treats. Wait for him to sit – say “yes” and give him a treat. Then step backwards or sideways to encourage him to stand and wait for him to sit. Give another treat as soon as they sit. After a few repetitions, you can begin saying “sit” right as he begins to sit.

The next option is called luring. Get down in front of your puppy, holding a treat as a lure. Put the treat right in front of the pup’s nose, then slowly lift the food above his head. He will probably sit as he lifts his head to nibble at the treat. Allow him to eat the treat when his bottom touches the ground. Repeat one or two times with the food lure, then remove the food and use just your empty hand, but continue to reward the puppy after he sits. Once he understands the hand signal to sit, you can begin saying “sit” right before you give the hand signal.

Never physically put your puppy into the sitting position; this can be confusing or upsetting to some dogs.

How To Teach a Dog To Stay

A puppy who knows the “stay” cue will remain sitting until you ask him to get up by giving another cue, called the “release word.” Staying in place is a duration behavior. The goal is to teach your dog to remain sitting until the release cue is given, then begin adding distance.

First, teach the release word. Choose which word you will use, such as “OK” or “free.” Stand with your puppy in a sit or a stand, toss a treat on the floor, and say your word as he steps forward to get the treat. Repeat this a couple of times until you can say the word first and then toss the treat AFTER he begins to move. This teaches the dog that the release cue means to move your feet.

When your dog knows the release cue and how to sit on cue, put him in a sit, turn and face him, and give him a treat. Pause, and give him another treat for staying in a sit, then release him. Gradually increase the time you wait between treats (it can help to sing the ABC’s in your head and work your way up the alphabet).  If your dog gets up before the release cue, that’s ok! It just means he isn’t ready to sit for that long so you can make it easier by going back to a shorter time.

Once your dog can stay in a sit for several seconds, you can begin adding distance. Place him in a sit and say “stay,” take one step back, then step back to the pup, give a treat, and your release word. Continue building in steps, keeping it easy enough that your dog can stay successful. Practice both facing him and walking away with your back turned (which is more realistic).

Once your dog can stay, you can gradually increase the distance. This is also true for the “sit.” The more solidly he learns it, the longer he can remain sitting. The key is to not expect too much, too soon. Training goals are achieved in increments, so you may need to slow down and focus on one thing at a time. To make sure the training “sticks,” sessions should be short and successful.

How to Teach a Dog to Lay Down 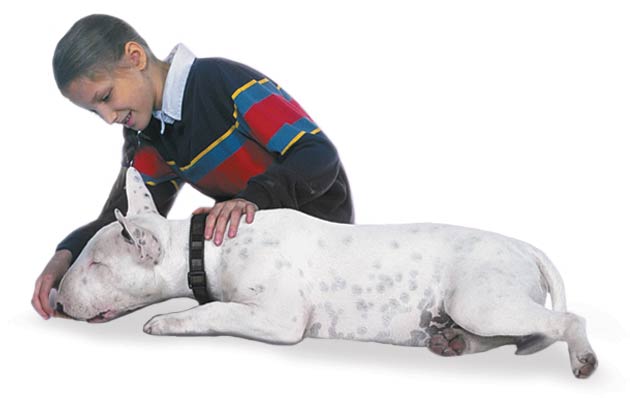 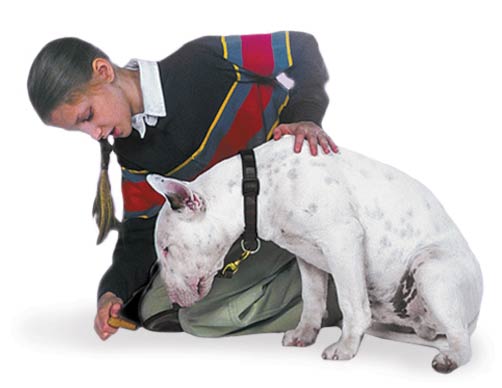 “Down” can be taught very similarly to “sit.” You can wait for your dog to lie down (beginning in a boring, small room such as a bathroom can help) and capture the behavior by reinforcing your dog with a treat when he lies down, giving him his release cue to stand back up (and encouragement with a lure if needed) and then waiting for him to lie down again. When he is quickly lying down after standing up, you can begin saying “down” right before he does so.

You can also lure a down from a sit or stand by holding a treat in your hand to the dog’s nose and slowly bringing it to the floor. Give the treat when the dog’s elbows touch the floor to start. After a few practices, begin bringing your empty hand to the floor and giving the treat AFTER he lies down. When he can reliably follow your hand signal, begin saying “down” as you move your hand.

Just like with sitting, never use force to put your dog into a down.

Keep training sessions short and fun. End each session on a positive note. If you feel your dog is having a difficult time learning or being “stubborn,” evaluate the speed of your training and the value of your rewards. Do you need to slow down and make the steps easier, or does your dog need a bigger paycheck for a harder exercise?

The “Basic 5” commands will give your puppy a strong foundation for any future training.

And just think, if you and your puppy continue to work hard—and have fun—at training, someday you may become obedience champs!