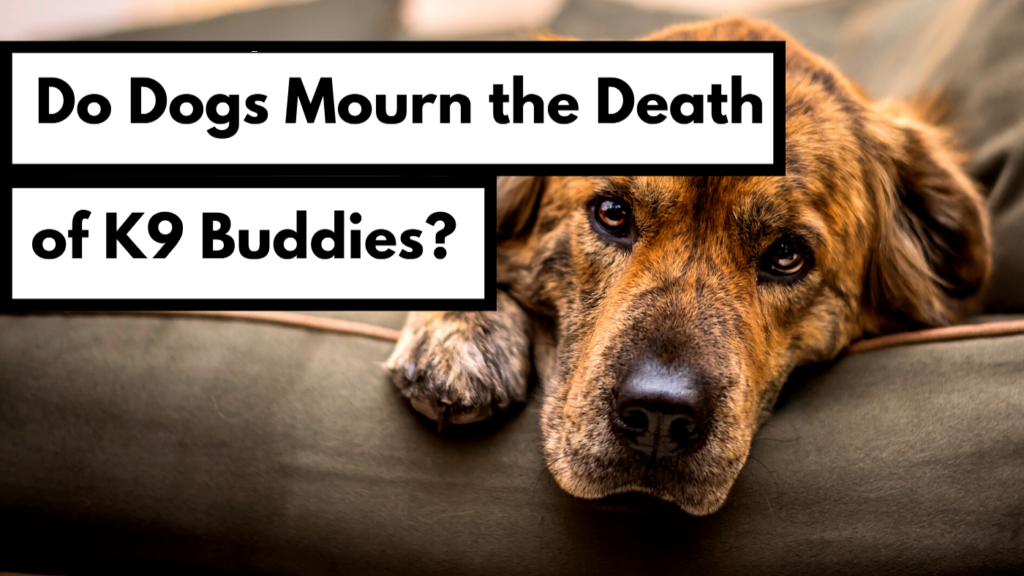 A new study indicates that dogs have the ability to grieve, and express negative emotions in reaction to the death of other dogs they have lived with.

The study, which was published in the journal Scientific Reports on Thursday, states that dogs who lived with a companion dog that died “changed both in terms of activities (‘playing’, ‘sleeping’, and ‘eating’) and emotions (fearfulness), which occurred as a function of the quality of the relationship between the two animals.”

I came across a story this week about how dogs can mourn the death of their canine companions. Just recently, our Siberian Husky Raegan passed away and her best buddy, Bodhi, could see that she was gone. We could tell that he would smell the places she used to lay and would look for her from time to time when we would do things in our normal routine like a quick romp outside, or when we would go up to bed. Albeit this was not a scientific study by any means, we could see that Bodhi missed Raegan and that is not putting human emotions on dogs.

So what does the scientific study say?

Using results from 426 Italian adults “who had owned at least two dogs, one of whom died while the other was still alive,” researchers found that “a dog may show grief-related behavioral and emotional patterns when a close conspecific dies, with aspects of the latter possibly related to the owner’s emotional status.”

Participants in the study reported “several negative behavioral changes” in their surviving pet after the death of the other dog.

According to the study, dogs sought more attention, played less, had a lower level of activity, and slept more. They also had decreased appetites and increased vocalization.

Ninety-two percent of those participating in the study said their two dogs had lived together for over a year prior to one of the dogs dying. Still, the study indicated that the amount of time the dogs lived together did not affect the likelihood of behavioral changes.

To prevent bias in the study, the researchers cross-referenced reports and used statistical analysis to determine if owners were correctly identifying behavioral changes in their pets.

“This particular structure of the questionnaire, and the statistical analyses we run, allowed us to identify when participants’ responses concerning a dog’s changes were more likely to be influenced by their own perceptions and emotions,” Federica Pirrone, a lecturer of veterinary ethology and animal welfare at the University of Milan and senior author of the study, told Vice of the findings.

“As for many aspects, therefore, it was possible to make this influence emerge or, on the contrary, to exclude it, making it more likely that the reported changes were real,” she continued.

Pirrone said that after completing the study published in Scientific Reports, and she her colleagues “are already working on the next step of the project, which aims to confirm that the dogs are responding to the ‘loss’ of an affiliate, and hopefully to even discover whether dogs are only responding to such loss, or even to their ‘death’ per se.”

She added, “The understanding of behavioral patterns after loss in non-human animals can be helpful in recognizing these animals’ emotional needs. The results of this research tell us that domestic dogs may react negatively when a companion conspecific dies. Recognizing and being able to predict these reactions and underlying emotions allows us to identify the most effective strategies to support them and their owner in coping with these difficult circumstances.”

So, what do you think? Do dogs miss or mourn their canine companions? Have you seen this in your own dogs? Let us know in the comments below or post on our social channels, just search dog works radio. For more training tips and advice, please check out Alaska dog works.com. One last thing, did you know that the single best thing you can do for our show is to tell your family and friends how you listen? Let them know and maybe they can be a rabid listeners just like you.