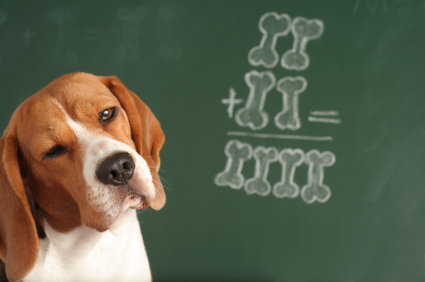 The term learning theory sounds more intimidating than it actually is. Simply put, dogs learn through association. So, as dog owners, our goal is to teach our canine companions to associate words or cues with behaviors. Let’s learn all about learning theory in dog training!

Did you know that there are two main ways associations happen: classical and operant conditioning.

Classical conditioning occurs when a dog involuntarily associates two stimuli with each other. Consider this scenario: dogs salivate when they smell food. So if we repeatedly ring a bell right before a dog smells food, it will soon associate the sound of a ringing bell with food and begin to salivate, involuntarily. The word classical refers to the fact that, in this environment, learning is involuntary. The word conditioning refers to the process of teaching through association.

Operant conditioning is just the opposite, when a dog learns to associate a voluntary behavior with a consequence. Now, the word consequence does not always refer to a negative repercussion. On the contrary, consequences are often desirable things in operant conditioning. In the earlier example, we learned that dogs can be conditioned to associate and anticipate food with the sound of a ringing bell, which causes them to salivate.

Remember, dog training is as easy as A + B = C or Antecedent + Behavior = Consequence.

In operant conditioning, a dog is taught to offer a behavior, such as a sit, after being given a cue but before it is given food. In this example, the dog learns that hearing or seeing the cue for “sit” (antecedent / stimulus) + the act of sitting (voluntary behavior) = food (consequence). Here we used a rewarding consequence to encourage the dog to continue sitting. This method is one of four ways that operant conditioning is used to teach a dog how to associate a behavior with an antecedent and consequence.

The Good and the Bad

Positive reinforcement is when we add something pleasant in order to reinforce or cause a behavior to continue.

Negative reinforcement is when we take away something unpleasant in order cause a behavior to continue.

Positive punishment is when we add something unpleasant in order to punish or cause a behavior to stop.

Negative punishment is when we take away something pleasant in order to cause a behavior to stop.

Can you identify which of these four methods I described in our example of operant conditioning?

If you said positive reinforcement, you are right! We added something pleasant (food) once the dog sat in order to reinforce or cause the behavior to continue. This taught the dog to voluntarily sit in anticipation for a reward.

Positive reinforcement is when we add something pleasant in order to reinforce or cause a behavior to continue. Click To Tweet

What are Drives in your Dog?

Drives come in many different forms and vary widely from dog to dog. And it is important to remember that different dog breeds were traditionally bred to complete different tasks, which require different personality traits that can affect their motivation to do or not to do something. For example, while one dog may be perfectly content with petting and praise as a reward (sociability or what we call pack drive), others prefer to avoid human touch altogether. Some dogs enjoy chasing other animals or objects (prey drive) and others love to play with other dogs, people or toys (play drive). Drives play a critical role in understanding learning theory in dog training. 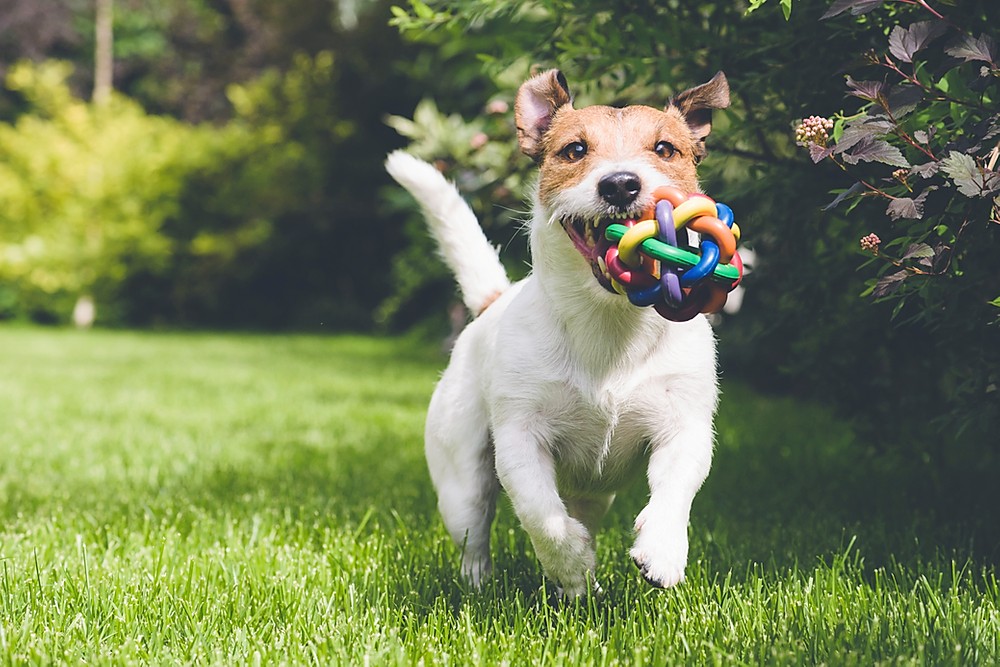 Food isn’t the only viable reward in training. Many dogs are content with the opportunity to play.

At this point, let’s return to the four quadrants of operant conditioning for a moment. We have already learned about positive reinforcement when we added food as a reward to encourage a dog to continue sitting when it was given a cue.

Positive reinforcement is the preferred training method for most professional trainers. It has been scientifically proven to increase the rate of learning, encourages dogs to work harder for rewards, eliminates the need for the use of force or aversive training tools, and fosters a human-canine bond built upon mutual trust and respect, rather than one on a dog’s desire to avoid fear, pain or punishment.

So how do the other three quadrants of operant conditioning work, and are any of them appropriate in training?

Let’s consider another example. Imagine you have a lab who is highly motivated by human attention (sociability/pack drive), and as a result, it jumps on strangers when they enter the house. You consider this to be an inappropriate way to greet guests, so you start yelling “NO, NO, NO, OFF!” This is an example of positive punishment. You are adding something unpleasant (yelling) in order to punish or stop a behavior (jumping).

What most owners do not realize is that yelling “off” or “no” is actually the least effective way to solve this problem. Think about what the dog is trying to accomplish in this situation. Jumping is an attention-seeking behavior, and by reprimanding your dog (yelling), it is still rewarding him with what he craves (attention), even if it is unpleasant.

And because the dog has not been taught what to do instead of jump on guests, not only will the behavior continue, but you are also inadvertently affecting the way he perceives you. Dogs can begin to see humans who use positive punishment as the thing that causes unpleasant things to happen, which leads many dogs to stop listening to their owners altogether. When this occurs, many owners often confuse their dog’s desire to avoid something unpleasant (in this case, yelling) with general stubbornness. And in extreme cases, or through the use of aversive and inhumane training tools, dogs can even learn to become aggressive in order to deter something unpleasant from happening.

So how do we safely teach dogs that jumping is wrong without inadvertently causing all of these repercussions?

It’s pretty simple, really. Just turn your back to the dog or remove yourself from the area altogether.

This is a form of negative punishment, as you are causing the behavior to stop (punishment) by removing (negative) the dog’s opportunity for reward (attention). But remember, this is only half of the equation. Whenever we punish a behavior, it is always best to show dogs what we want them to do instead. So as soon as they put “all four on the floor,” we should reward them with a treat.

Now, let’s look at that last quadrant of operant conditioning.

Negative reinforcement is the act of removing something unpleasant in order to reinforce or cause a behavior to continue.

Consider this example. John has a German Shepherd that pulls on its leash, so John decides to use a prong collar to teach the shepherd not to pull. Prong collars work by pinching the skin of a dog’s neck when there is tension on the leash, teaching dogs to avoid the pain associated with pulling on a leash. The act of adding something unpleasant (pinching) to cause a behavior to stop is positive punishment. But the act of removing something unpleasant (pinching) when there is no tension on the leash is actually a form of negative reinforcement.

In this example, positive punishment and negative reinforcement work in tandem with one another. And in all cases with these two training methods, it is important to remember that in order to negatively reinforce or positively punish a wanted or unwanted behavior, some form of pain or discomfort (be it physical or emotional) has to be present in the training equation, even if only at a low magnitude. And as we learned earlier, this is not always in the best interest of our dogs or for the human-canine relationship.

At Alaska Dog Works, we adhere to the least intrusive, minimally aversive method of training in order to achieve the desired result. Guided by the findings of scientific research, we focus our training programs on positive reinforcement methods first and foremost. But we also recognize and believe that there are some training applications where it is not only appropriate but important to inform dogs when they are doing something wrong, by humanely removing the opportunity for reward (negative punishment).

Learning Theory in Dog training is not complicated, but it can be complex. And it is entirely situational. To ensure that you and your dog are setup for success, get in touch today to schedule a free discovery session with an experienced trainer today.