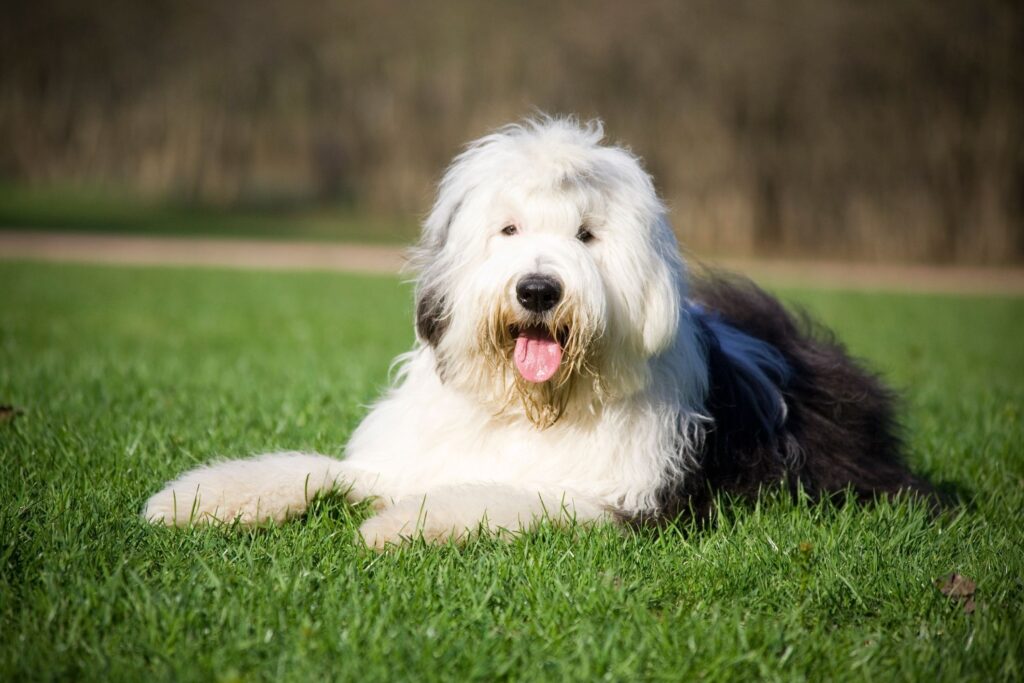 How to Train an Old English Sheepdog

Want to learn how to train your Old English Sheepdog to be one of the best-trained dogs? Click here to find out how.

The Old English Sheepdog is the archetypical shaggy dog, famous for his profuse coat and peak-a-boo hairdo, a distinctive bear-like gait, and a mellow, agreeable nature. The OES is a big, agile dog who enjoys exploring and a good romp.

Beneath the Old English Sheepdog’s profuse double coat is a muscular and compact drover, with plenty of bone and a big rump, standing 21 or 22 inches at the shoulder. Their eyes (when you can see them) are dark brown, or blue, or one of each. The OES breed standard says the skull is ‘capacious and rather squarely formed, giving plenty of room for brain power.’ OES move with a bear-like shuffle but are famous for their nimbleness afoot. Regular exercise is required for these strong, able-bodied workers. Equally famed are their many fine housedog qualities: watchfulness, courage, kindliness, and intelligence. Great with children, OES make patient, protective playmates. They are sensible watchdogs known for a loud, ringing bark.

The Old English Sheepdog, like the Bulldog and Collie, stands among the truly iconic dogs of the British Isles. The “Bobtail,” as the breed is often known, was most likely developed in the west of England, in the counties of Devon and Somerset and the Duchy of Cornwall.

The name Old English Sheepdog is something of a misnomer. As a creature of the late 1700s, the OES is not particularly old by canine standards. By blood, they aren’t fully English; possible OES component breeds include dogs of Scotch, European, and Russian ancestry. And, technically, they aren’t even sheepdogs: OES were employed primarily as drovers who moved cattle over dusty country roads, from the pasture to town markets. In Germany, around the same time, the Rottweiler was building a similar reputation as a “butcher’s dog.” In some pastures, shepherds would shear the OES blue-gray and white coat once a year and use the clippings to make yarn for clothing.

With their full coat, free and powerful gait, and warm personality, OES show well in the ring. They were present at the sport’s very beginning. Stockmen have been exhibiting their OES in England since 1865. The AKC registered its first OES in 1888, and in 1914 the breed made its debut appearance in the winner’s circle at Westminster Kennel Club.

Their looks and intelligence make OES natural actors, seen to good effect in Disney’s “The Shaggy Dog” and “The Shaggy D.A.” Among the most famous real-life OES was Paul McCartney’s Martha, who inspired the Beatles song “Martha My Dear.”

This is a breed that requires some physical activity. There is a wide variance in the activity levels, but all require some regular exercise. Fortunately, they do have an “off switch” when they come indoors.

The Old English Sheepdog is the archetypical shaggy dog, famous for his profuse coat and peak-a-boo hairdo, a distinctive bear-like gait, and a mellow, agreeable nature. Click To Tweet

The coat is what attracts most people to the Old English Sheepdog. The breed is double-coated and requires a thorough grooming down to the skin, over the entire dog, at least weekly to maintain their full coats. “Puppy trims” are good options for pet dogs, but they also require regular brushing between baths and haircuts. Keeping the feet clipped (‘Poodle feet’) will minimize problems and cleanup. Potential owners need to be prepared to spend the time required to do this, or pay a professional groomer, for several sessions each month for the life of the dog. As with all breeds, the nails should be trimmed regularly.

One longtime breeder advises, “Never allow your puppy to do something that you would not want a large, shaggy, wet, possibly muddy dog doing in your house.” All OES puppies are adorable, and all grow up to be large, shaggy dogs. Most Old English Sheepdogs are quite intelligent and have a biddable nature. After they learn something, they do not forget it. They do get bored with repetitive, robotic training exercises. If you want to participate in some of those activities, you need to change things up and make it new and fun. As with all dogs, early socialization in puppyhood is vital.

The Old English Sheepdog should do well on a high-quality dog food, whether commercially manufactured or home-prepared with your veterinarian’s supervision and approval. Any diet should be appropriate to the dog’s age (puppy, adult, or senior). Some dogs are prone to getting overweight, so watch your dog’s calorie consumption and weight level. Treats can be an important aid in training, but giving too many can cause obesity. Learn about which human foods are safe for dogs, and which are not. Check with your vet if you have any concerns about your dog’s weight or diet. Clean, fresh water should be available at all times.

Want to learn how to train your Old English Sheepdog to be one of the best-trained dogs? Click here to find out how.