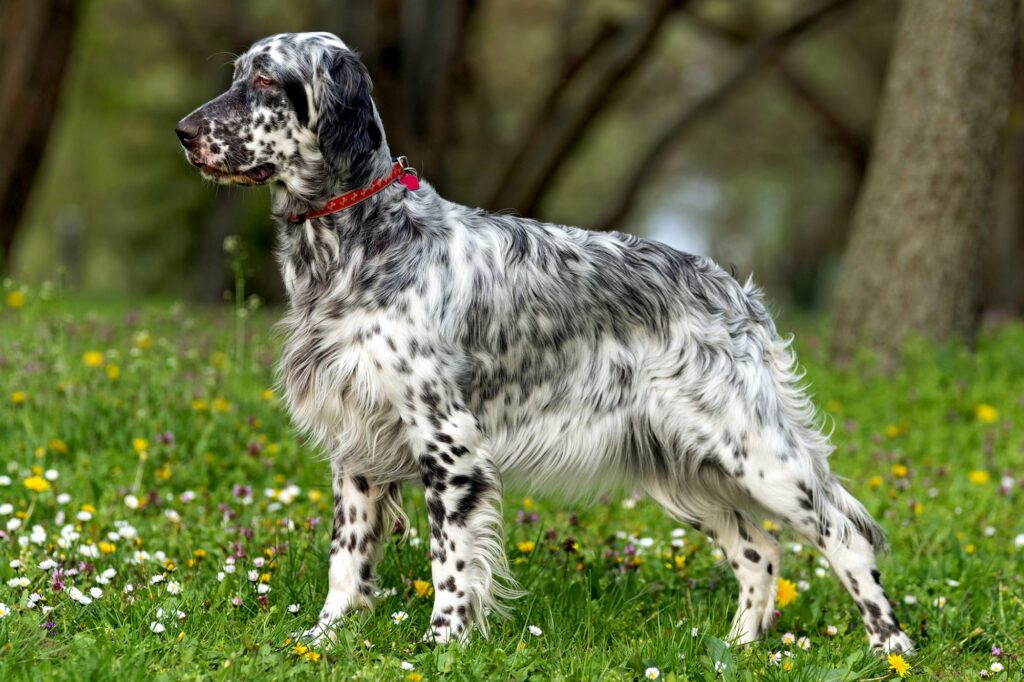 How to Train an English Setter

Want to learn how to train your English Setter to be one of the best? Click here for more information

The English Setter is a medium-sized sporting dog of sweet temper and show-stopping good looks. It is one of the AKC’s four British setters created to work on the distinctly different terrains of England, Ireland, and Scotland. English Setters are elegant but solid dogs of beauty and charm. The word ‘belton,’ unique to the breed, describes the speckled coat patterns of colors that sound good enough to eat: liver, lemon, and orange among them. Under the showy coat is a well-balanced hunter standing about 25 inches at the shoulder. A graceful neck carries a long, oval-shaped head proudly, and dark brown eyes convey a soft expression. The merry English Setter is known as the gentleman of the dog world but is game and boisterous at play. English Setters get on well with other dogs and people. A veteran all-breed dog handler says, ‘As a breed to share one’s life and living space with, no other breed gives me more pleasure than the English Setter.

The English Setter’s history goes back some 400-500 years. Early authorities say the breed precedes the Pointer in development. Evidence in sportsmen’s writings suggest the English Setter was originally produced from crosses of the Spanish pointer, the large water spaniel, and the Springer Spaniel.

The Setter was developed to lay down quietly, or “set,” when they located game birds. This style of hunting at the time would then require the hunter to cast a net in the area, sometimes covering the dog as well, and flush and harvest the birds that were ensnared. This low-lying method was ideal for net hunting as a standing dog on point would be much more easily tangled in the net. Any breed that “set” was branded a setter, but ultimately, the Setting Spaniel’s keen nose and superiority in finding birds made it the best choice in the selective breeding that developed dogs for this particular purpose. In the 18th century, firearms replaced the nets and further selective breeding developed an upright point in Setters, the better to see the dog from a distance. The 19th century saw a divergence of Setters into different breeds, evolving based on their location and the terrain in which they hunted.

Considerable credit for the development of the modern Setter goes to Edward Laverack of England, who, in 1825, obtained “Ponto” and “Old Moll,” products of a 35-year-old English Setter line. Another prominent figure in this breed’s development was R. LL. Purcell Llewellyn of Wales. Though he had bought his dogs from Laverack, Llewellyn’s focus was on field performance, unlike Laverack, who is mostly associated with the show Setter. Once the breed was exported to America in the 19th century, C.N. Myers of Blue Bar Kennels in Pennsylvania played a major role in the development of the English Setter in the states.

English Setters are generally healthy dogs. Responsible breeders screen their breeding stock for health concerns such as elbow and hip dysplasia and deafness. The breed can experience bloat, a sudden, life-threatening stomach condition, and owners should learn what signs to look out for and what to do should it occur. The ears should be checked regularly for signs of infection.

To keep their long, silky coats beautiful, English Setters need to be brushed at least once a week with a soft bristle brush. A long-toothed metal dog comb can also come in handy for gently working through areas where tangles may be beginning to form. Left unattended, tangles and mats are uncomfortable for your dog and can cause skin problems to develop. Regular trimming around the face, feet, and other areas can keep your English Setter looking neat. Nails should be trimmed once a month, and a bath every four to six weeks keeps the English Setter’s coat and skin clean and healthy.