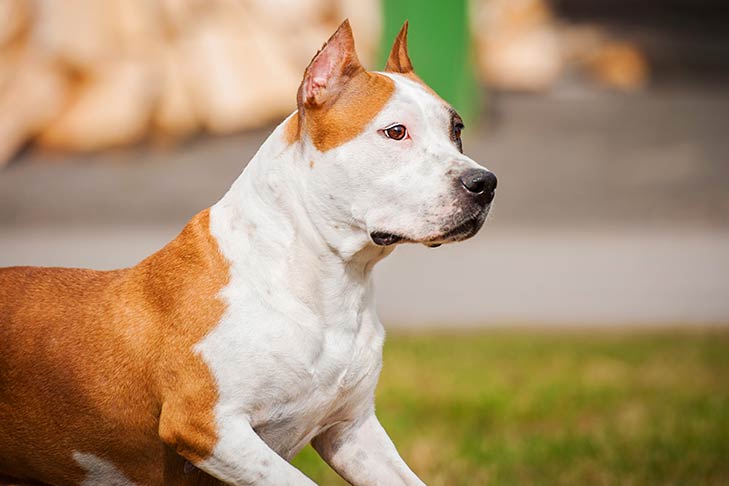 How to Train an American Staffordshire Terrier

Want to learn how to train your American Staffordshire Terrier to be one of the best-trained dogs? Click here to find out how.

The American Staffordshire Terrier, known to their fans as AmStaffs, are smart, confident, good-natured companions. Their courage is proverbial. A responsibly bred, well-socialized AmStaff is a loyal, trustworthy friend to the end.

AmStaffs are stocky, muscular bull-type terriers standing 17 to 19 inches at the shoulder. The head is broad, the jaws well defined, the cheekbones pronounced, and the dark, round eyes are set wide apart. AmStaff movement is agile and graceful, with a springy gait that advertises the breed’s innate confidence. The stiff, glossy coat comes in many colors and patterns. AmStaffers describe their dogs as keenly aware of their surroundings, game for anything, and lovable ‘personality dogs’ around the house. AmStaffs like mental and physical challenges. They are highly trainable, as their many forays into showbiz suggest. When acquiring an AmStaff, there’s only one way to go: Do your homework and find a responsible AKC breeder.

Years ago in Great Britain, several dog breeds were created to excel in blood sports. They were expected to fight one another, or they were turned loose in packs against a staked bear or bull, with spectators betting on the grisly outcome. Such revolting pastimes have long since been outlawed. These sad spectacles did, however, leave us a happy legacy: Several of today’s most loved breeds—the Bulldog, the Bull Terrier, and the American Staffordshire Terrier among them—got their start as fighting and baiting dogs of the 18th and 19th centuries.

When it comes to the bull-type terrier breeds, all can agree that the common component in their makeup was the Bulldog. (Note that the Bulldog of 200 years ago was a vastly different, more ferocious creature than the lovable “sourmugs” of today.) The argument begins when breed experts try to nail down which preexisting terrier breeds reside in the AmStaff’s genetic background. Some suggest that such extinct breeds as the White English Terrier and Black-and-Tan Terrier were part of the genetic mix that led to the creation of the Staffordshire Terrier, the forerunner of the AmStaff.

Whatever the AmStaff’s true genetic composition might be, we are certain that working-class Brits with an interest in blood sports combined the stocky build and punishing jaws of old-style Bulldogs with the innate courage and “gameness” of terriers to create bull-type terrier breeds.

The well-bred AmStaff of today is a more mellow fellow than his pit-fighting ancestors and has long been a great American favorite. This is suggested by the breed’s many sightings in our popular culture: In 1903, an AmStaff named Bud was along for the ride on America’s first cross-country auto trip (the subject of the Ken Burns documentary “Horatio’s Drive”); Petey, in the old “Our Gang” film comedies of the 1930s, was an AmStaff, as is Tige, the dog in the Buster Brown Shoes logo; and America’s most decorated American war dog was an AmStaff named Sgt. Stubby, a K-9 of World War I who counted three U.S. presidents among his admirers.

The Am Staff is a robust, healthy breed, and a responsible breeder will screen breeding stock for these health conditions such as canine hip dysplasia, cardiac disease, and skin and coat allergies. A genetic test has recently been developed for cerebellar ataxia, which causes a progressive decline in muscle coordination, first appearing between ages 3 and 5 years; now, by identifying dogs with the mutation, breeders can avoid producing it in their bloodlines. As with all breeds, the ears should be checked regularly, and the dog’s teeth should be brushed often.

Taking care of the AmStaff’s short, stiff coat is remarkably easy. A quick once-over with a soft bristle brush every week is usually enough to remove any dirt or other foreign matter. What’s more, a good brushing distributes skin oils throughout the coat to help keep it healthy. If an Am Staff gets into something particularly messy, a bath will probably be called for. Otherwise, bathing can wait until when and if he develops a ‘doggy’ smell. As with all breeds, the AmStaff’˜s nails should be trimmed regularly, as overly long nails can be painful and cause the dog problems while walking and running.

An athletic, energetic dog such as the American Staffordshire Terrier requires a lot of exercise. Leaving the dog out in the yard all day is not the right approach, however: Yes, he can run around, but the AmStaff is a people-oriented dog who thrives when he is made part of the family. Long play sessions with his owner develop his physical and psychological health. In addition, many AmStaffs enjoy taking part in canine sports such as obedience, agility, and dock diving. AmStaffs are even trained in search-and-rescue and excel at it.

The American Staffordshire Terrier, known to their fans as AmStaffs, are smart, confident, good-natured companions. Click To Tweet

Early socialization and puppy training classes are recommended for all breeds, but given the AmStaff’s strong will, physical strength, and exuberance, they are a necessity. The breed’s intelligence and desire to please make training a fun, easy process. Even so, certain behaviors, such as chewing and digging, may be hard to resolve. It must be noted that dog aggression can develop even in well-socialized Am Staffs; an AmStaff should never under any circumstances be left alone with other dogs.

The AmStaff should do well on a high-quality dog food, whether commercially manufactured or home-prepared with your veterinarian’s supervision and approval. Any diet should be appropriate to the dog’s age (puppy, adult, or senior). Some dogs are prone to getting overweight, so watch your dog’s calorie consumption and weight level. Treats can be an important aid in training, but giving too many can cause obesity. Learn about which human foods are safe for dogs, and which are not. Check with your vet if you have any concerns about your dog’s weight or diet. Clean, fresh water should be available at all times.

Want to learn how to train your American Staffordshire Terrier to be one of the best-trained dogs? Click here to find out how.