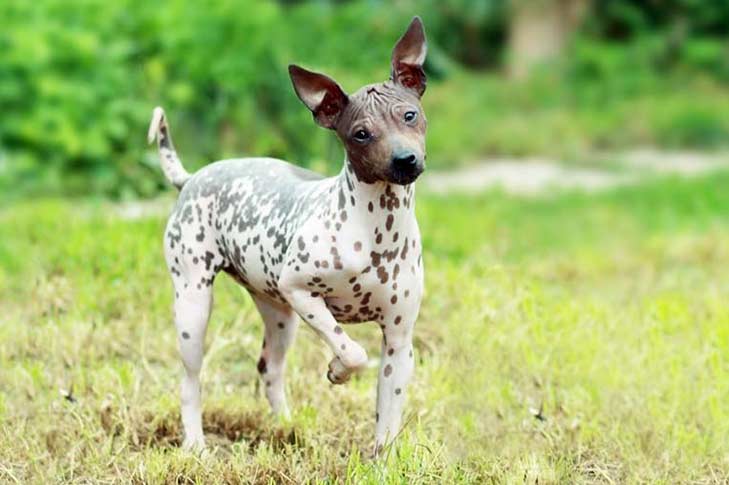 How to Train an American Hairless Terrier

Want to learn how to train your American Hairless Terrier to be one of the best-trained dogs? Click here to find out how.

The American Hairless Terrier, a Louisiana native, is a smart, inquisitive, and playful dog that comes in hairless and coated varieties. He is a fine choice for allergy sufferers who want a dog with true terrier grit and courage.

The American Hairless Terrier stands between 12 to 16 inches at the shoulder, and comes in both coated and hairless varieties. The hairless variety might have eyebrows and whiskers, while the coated has a short, shiny coat. The skin of the hairless is smooth and warm to the touch. The broad, wedge-shaped head is a hallmark of both varieties. Erect, V-shaped ears frame the round, expressive eyes that gleam with curiosity. The American Hairless moves with jaunty pep in his step that announces real terrier attitude. The hairless variety is as hypoallergenic as a dog can get. Hairlessness, though, presents its own challenges. Sunburn is a concern, and cold weather requires special precautions. This breed is protective of their humans and make alert watchdogs.

The American Hairless Terrier, the only hairless breed indigenous to the United States, is a naturally occurring offshoot of the Rat Terrier.

Rat Terriers have been around since the early 1800s, when they were developed in England as one of dozens of terrier breeds created to exterminate rats that carried disease and raided food supplies in town and country. Originally called “Feists” as a testament to their feisty temperament, these proto–Rat Terriers were prodigious ratters. They were employed on farms (where one ferocious barnyard Feist was said to have dispatched 2,500 rats on a single day) and in the infamous rat pits, where spectators bet on the number of rats that their favorite terrier could kill.

In the late 1800s, Feists were brought to rural America by British miners who sought a new life. It was here that the Feist was stabilized as a breed with crosses to the Smooth Fox Terrier. It is said that President Theodore Roosevelt, who adored his Feist named Skip, coined the name Rat Terrier.

Fast-forward some 70 years, from Roosevelt’s time to 1972. It was then, in Trout, Louisiana, that a strange thing happened: A hairless was born into a litter of midsize Rat Terriers of normally coated parents. (This is a good place to note that the hairless pups are born with a birth coat that falls out when they are several weeks old.) A couple named Edwin and Willie Scott acquired the hairless and named her Josephine. She was bred and produced Gypsy, a hairless female. Eight years later, after producing several litters of coated pups, Josephine gave birth to a pair of hairless siblings, Jemima and Snoopy. In 1983, Snoopy was bred to his sisters and sired several hairless offspring. A new breed, the American Rat Terrier, was born.

The Scotts continued their breeding program, kept careful records, and founded the first club devoted to their new breed. The breed’s AKC parent club, the American Hairless Terrier Club of America, was established in 2009; the breed gained full AKC recognition in 2016.

Responsible breeders screen for health conditions such as hip dysplasia, cardiac conditions, luxating patella (a dislocated kneecap similar to what is called a ‘trick knee’ in humans), and Legg-Calve-Perthes disease, a hip condition that can be corrected with surgery. Skin problems are quite rare in the breed. As with all breeds, an American Hairless Terrier’s ears should be checked regularly to remove foreign matter and avoid a buildup of wax, and the teeth should be brushed regularly.

Responsible breeders screen for health conditions such as hip dysplasia, cardiac conditions, luxating patella (a dislocated kneecap similar to what is called a ‘trick knee’ in humans), and Legg-Calve-Perthes disease, a hip condition that can be corrected with surgery. Skin problems are quite rare in the breed. As with all breeds, an American Hairless Terrier’s ears should be checked regularly to remove foreign matter and avoid a buildup of wax, and the teeth should be brushed regularly.

The American Hairless Terrier has only moderate exercise needs. They have to go outside several times a day, of course, but brief daily sessions in a fenced-in yard or on regular walks will generally be all they require. They enjoy activity but are also quite happy to curl up on the couch next to their owner. The breed is friendly and happy to play with people or other dogs. Thanks to their high trainability, they can do well in a wide range of canine activities such as obedience, rally, and agility competitions.

As with all breeds, early socialization and puppy training classes are recommended. Gently exposing the puppy to a wide variety of people, places, and situations between the ages of about 7 weeks and 4 months will help him develop into a well-adjusted, well-mannered adult. Puppy training classes help owners learn how to recognize and avert any behavior problems and enhance the bond between the puppy and owner. The American Hairless Terrier is very intelligent and eager to please, so training is usually an easy and enjoyable activity.

The American Hairless Terrier should do well on a high-quality dog food, whether commercially manufactured or home-prepared with your veterinarian’s supervision and approval. Any diet should be appropriate to the dog’s age (puppy, adult, or senior). Some dogs are prone to getting overweight, so watch your dog’s calorie consumption and weight level. Treats can be an important aid in training, but giving too many can cause obesity. Learn about which human foods are safe for dogs, and which are not. Check with your vet if you have any concerns about your dog’s weight or diet. Clean, fresh water should be available at all times

Want to learn how to train your American Hairless Terrier to be one of the best-trained dogs? Click here to find out how.