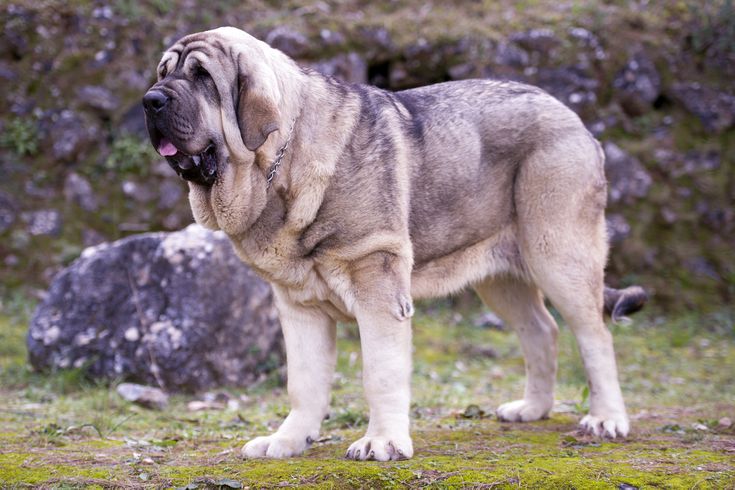 How to Train a Spanish Mastiff

Want to train your Spanish Mastiff to be one of the best? Click here to find out how

The Spanish Mastiff is a very intelligent dog, not without beauty, whose expression manifests both these qualities. Rustic, affectionate, kind and noble, he is very determined when facing dangerous animals and in front of strangers, especially when he has the opportunity to defend and protect farms or cattle. In his behaviour, one can see it is a dog sure of himself, determining his strength because he is aware of his enormous power.

The Spanish Mastiff is a dog of great size, well-balanced, very powerful and muscular. He has a massive head and a body covered with a medium-length coat. His bark is raucous, low pitched and deep, very sonorous and audible from a considerable distance. The Spanish Mastiff comes in a range of coat colors, including black, fawn, red, gray, and yellow, and can be seen with brindle or white markings. Used for guarding and defense, the breed is closely related to the seasonal moving of livestock, especially the Merino livestock, which he accompanied at the time of the ‘Mesta.’ In the Middle Ages, this was an association of sheep ranchers who journeyed seasonally to distant locations to find grazing pastures. The Spanish Mastiff was in charge of defending them against wolves and other predators throughout their travels. Either sedentary or wandering, he performs in the same way for farms, people, and properties in general.

The Spanish Mastiff is a very old breed. It appeared on the Iberian Peninsula before the Roman invasion, brought by the Greeks and Phoenicians over 2,000 years ago. The first mentions of a mastiff from the region appears in writings by Virgil dated from around 30 A.D. Virgil, in his poem The Georgics, mentions that the Iberian mastiff’s nurturing character would make it the best guardian and defender of the herd. Another mention of the breed dates from the first century. The Roman agronomist and prominent writer, Columella, authored a 12 volume book, Res Rustica, in which he wrote this about mastiffs: “…being suitable to cattle mastiffs are white in colour mostly for to distinguish them better from wolves with which they have to fight in darkness of dawn.”

The role of Mastiffs grew in the 10th century when the best organized and guided farming of animals in Europe became the pedigree of sheep in Spain and the state’s economy was based on production and the elaboration of wool. Development peaked in the 12th century when the breeding of a new genre of sheep, merinos, began. These animals usually spent the winter in the south of Spain and moved at the beginning of the summer to the mountain slopes in the north. The wandering herds of sheep were accompanied by about 40,000 shepherds and for every 100 sheep, there was at least one mastiff for the shepherd’s defense as well as the herd’s.

Such enormous migrations made a mark on Spanish culture. The Spanish Mastiffs can be seen in literary works as well as admired in paintings by the famed Velazquez. By that time, these dogs were characterized by their well-known traits of independence, weather resistance, and defensiveness.

Some dogs may be faced with health challenges in their lives, but the majority of Spanish Mastiffs are healthy dogs. Working with a responsible breeder, prospective owners can gain the education they need to learn about specific health concerns within the breed.

Beyond regular weekly grooming, the occasional bath will keep your Spanish Mastiff clean and looking his best. Grooming can be a wonderful bonding experience for you and your dog. The strong, fast-growing nails should be trimmed regularly with a nail clipper or grinder to avoid overgrowth, splitting, and cracking. Their ears should be checked regularly to avoid a buildup of wax and debris, which can result in infection. Teeth should be brushed regularly.