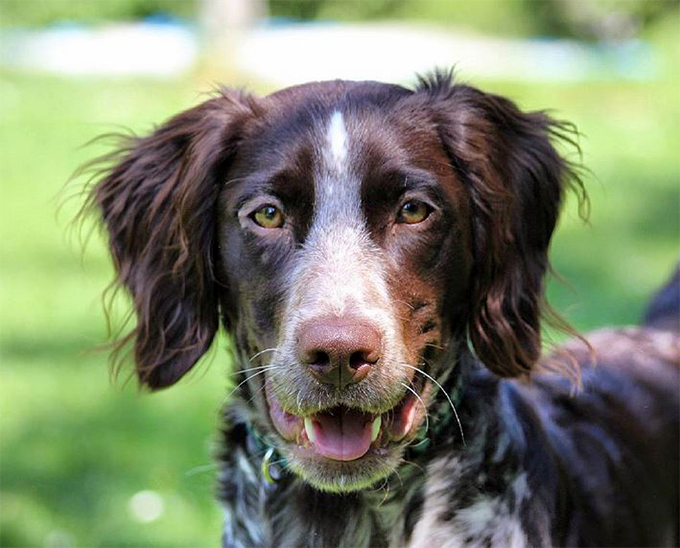 How to Train a Small Munsterlander

Do you want to have your Small Munsterlander be one of the best-trained dogs? Click here to find out how

The Small Munsterlander is a versatile hunting dog and natural retriever with a medium range, solid pointing instinct, and strong desire for the water. It has excellent tracking abilities for all types of work after the shot. These qualities are enhanced by intelligence and trainability. The Small Munsterlander is intelligent and capable of learning, has a full but even temperament, and is steady in character. It is alert and friendly towards people, which makes them suitable for family life; they have good social behavior and keeps in close contact with their master. It’s passionate, persevering predatory instinct, versatile hunting aptitudes and strong nerves and keenness for game make it an extremely adept hunting companion. During the off season, Small Munsterlanders can also be used for agility, obedience, retrieving, and hunting tests or trials. Small Munsterlanders have a strong pack instinct and thrive in outdoor-oriented families. In the house, they often can be found sleeping near (or on) the feet of their master. In their native country of Germany, it is the Kleiner Münsterländer.

The development of the Small Munsterlander is hidden somewhere in the middle of the 19th century. After the change of the German hunting law, the increasing number of hunters and hunting enthusiasts, and the systematic cultivation of the game stock, the breeding of new German Pointing Dogs began. There are reports saying that around 1870, long-coated ‘Wachtelhunds’ (German Spaniels) were well known in the Munsterland region. These dogs were firm in pointing, had enormous scenting abilities, and were also able to retrieve. In 1906, the well-known poet named Hermann Löns took care of the matter: He put a public appeal into the magazine Unser Wachtelhund to give him a report on the still existing specimens of the red Hanovarian Heath Hound. However, instead of that, he and his brothers discovered a pointing Wachtelhund on the farms that they called ‘Heidewachtel’.

Apart from the Löns brothers, well-known dog enthusiasts like the Baron of Bevervörde-Lohburg put efforts into getting a reasonable breeding stock in other regions as well. Mr. Heitmann, a teacher from Burgsteinfurt, achieved success with his line breeding. Several other breeding families, known as the so-called ‘Dorsten type’, appeared during the following years in Westphalia. On March 17, 1912, the ‘Verband für Kleine Münsterländer Vorstehhunde’ (Club for Small Munsterlander Pointing Dogs) was finally founded. At that time, this club expressed its aims as follows: ‘The Club pursues the purpose to promote the purity and the true breeding of the long-coated small pointing dog that has been bred in the Munsterland for many decades. The lack of fixed breed characteristics at that time inhibited the breeding activities as well as the Club activities.

Beginning in 1921, the breeders finally followed the breed standard that had been drawn up by Mr. Friedrich Jungklaus. Nevertheless, the true origin of the dogs of that time has not exactly been proven.

The Small Munsterlander was developed to perform many different hunting-related tasks, based on instinct rather than training. The breed is designed to hunt prey of any size, both furred and feathered; point out game to the hunter; retrieve the game that had been shot; and track wounded game. And all of this needed to be carried out in dense cover in the field or forest and in the water. In addition, the breed was developed to be an excellent family companion.

Like all breeds, there may be some small health issues, but conscientious breeders in both the United States and Europe have made a concerted effort to maintain the health of the breed. Some dogs may be faced with these health challenges in their lives, but the vast majority of Small Munsterlanders are healthy dogs. Regular veterinary care and proper feeding are vital to your dog’s health. Yearly DHLPP vaccinations, rabies shots, a monthly heartworm preventative regimen, and, in many parts of the country, a Lyme Disease vaccination, should not be neglected. Working with a responsible breeder, those wishing to own a Small Munsterlander can gain the education they need to know about specific health concerns within the breed

Occasional brushings will maintain the quality of the coat with the occasional bath to keep them clean and looking their best. Small Munsterlanders are seasonal shedders and as such, it is important to maintain their coats more frequently in the late spring and early fall. Their nails should be trimmed regularly with a nail clipper or grinder to avoid overgrowth, splitting, and cracking. Their ears should be checked regularly to avoid a buildup of wax and debris, which can result in infection. Teeth should be brushed regularly.

While Small Munsterlanders make wonderful family companions, they do require frequent exercise and stimulation. The breed was born to hunt and that is the task they are happiest at. This is an all-purpose, versatile hunting breed that was developed to hunt, point, retrieve, and track game. The breed’s hunting heritage means they have a high activity level and need appropriate outlets for their energy, including daily exercise. If you don’t hunt with your Small Munsterlander, be sure to give him other ways to tire himself out, such as going for a run or playing in a fenced area. They need to be supervised outdoors since their instinct is to hunt. If proper stimulation and exercise are not provided, they will wander and self-hunt when left to their own devices.

Like other versatile dogs, this breed is relatively slow to mature. It is not until they reach two years of age that most Small Munsterlanders are mentally adults. It is important to be prepared for at least one year of a strong and muscular fully-grown dog with the brain of a teenager. It is important to remember that they are bred as hunter’s helper and also as a family member. These friendly dogs need lots of time and interaction with their human family to reach their full potential and prefer to be raised in the home. As a general rule, Small Munsterlanders are good with kids and are tolerant of a child’s unpredictable behavior. However, as with all dogs, it is important to socialize them with children and supervise their interactions. It is never suggested to leave a dog alone with small children. It is also important to find a way to fit your Small Munsterlander into your pastimes. This will give him the chance to spend time with you and work for you, leading to a joyful and well-adjusted companion.

You are going to want to feed your Small Munsterlander a formula that will cater to his unique digestive needs throughout the various phases of his life. Many dog food companies have sport formulas that contain the protein/fat levels necessary for active breeds. The Small Munsterlander is a medium-sized breed and may have a lifespan of 12 to 14 years. What you feed your dog is an individual choice, but working with your veterinarian and/or breeder will be the best way to determine frequency of meals as a puppy and the best adult diet to increase his longevity. Clean, fresh water should be available at all times.

Do you want to have your Small Munsterlander be one of the best-trained dogs? Click here to find out how