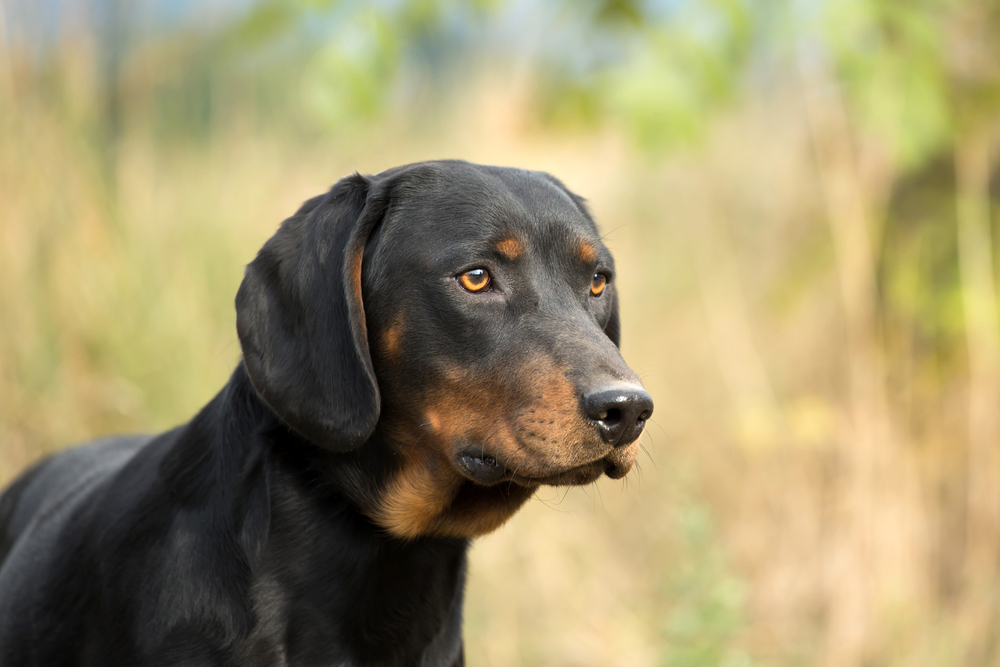 How to Train a Slovensky Kopov

Want to learn how to train your Slovensky Kopov to be one of the best-trained dogs? Click here to find out how

This spirited, persistent hunter will follow a scent for hours. The Slovensky Kopov is a hardy, hardworking breed that is also known for its courage and great endurance and was originally developed to hunt wild boar.

Also known as the Slovakian Hound, Slovak Hound, or the Slovensky Kopov is a medium-sized scent hound with a relatively light, but solid, build. His coat is of medium coarseness, close-fitting, dense, and always solid black with tan markings. It is an extremely intelligent breed with an excellent sense of smell and direction. Where he is known, he dominates the world of hunting by his endurance, character, and great courage.

A well-known type of hunting dog since antiquity, today’s breed was first recognized in the 1870s. The first written references about the Slovensky Kopov date back to the 17th and 18th centuries, when it was forbidden to cross this breed with others. This suggests that the Kopov had already earned recognition among hunting circles. The name “Kopov” is derived from the Hungarian word “kopo” meaning scent hound. The breeds Brandlbracke (Austrian Black and Tan Hound), Chart Polski, and Magyar Agar (Hungarian Greyhound) are believed to have been used in this breed’s background.

A more unified approach to breeding Kopovs began in 1915, when a series of regulations on hound dogs forbid the use of tall breeds for chasing down deer. This was also a time when the color pattern of Kopovs began to be standardized.

The modern era of Kopov breeding began in 1936. A select number of individual dogs were chosen for a controlled breeding program with the aim of weeding out any undesirable variation in color and height. Eventually, over several generations, the Kopov population was stabilized and the genotype was standardized. In 1963, the FCI accepted the Slovensky Kopov as a hunting dog of scenthound type. The Slovak Hound Breeders Club was established in Bratislava, Solvakia in 1988.

Although extremely common in its area of origin, it is only now being discovered by dog enthusiasts in other countries.

Some dogs may be faced with health challenges in their lives, but the majority of Slovakian Hounds are healthy dogs. Working with a responsible breeder, prospective owners can gain the education they need to learn about specific health concerns within the breed.

The Slovensky Kopov has a short, close-fitting coat that will only require occasional brushing. Since he has a dense undercoat, he sheds seasonally and, during this time, will require more regular brushing. Beyond that, the occasional bath will keep him clean and looking his best. His strong, fast-growing nails should be trimmed when needed with a nail clipper or grinder to avoid overgrowth, splitting, and cracking. His ears should be checked occasionally to avoid a buildup of wax and debris, which can result in infection. Teeth should be brushed as needed.

Want to learn how to train your Slovensky Kopov to be one of the best-trained dogs? Click here to find out how