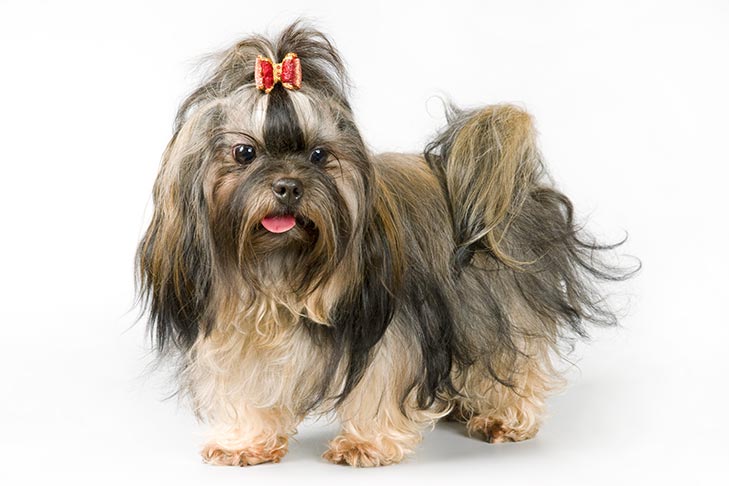 How to Train a Russian Tsvetnaya 

Do you want to have your Russian Tsvetnaya be one of the best-trained dogs? Click here to find out how

Russkaya Tsvetnaya Bolonka translates to “Russian Colored Lapdog.” Bolonki were originally bred to be the ultimate house pet for apartment living. Sweet, loving, intelligent, and willing to please, he is friendly to all and shows no sign of aggression.

The Russian Tsvetnaya Bolonka, or Bolonka for short, is a member of the Bichon family that was almost extinct until after the Cold War. It is a small companion dog that is hypoallergenic, funny, clever beyond words and intensely loyal to its family. Some are excellent mimics; others are content to sit by the door and monitor who is allowed in or out. Spirited, yet easy-going and sociable, the Russian Tsvetnaya Bolonka is great with children. Although they are quick to alert, they will not be a constant barker with early training on appropriate behavior. They are fairly independent for a toy breed and require early socialization with people. However, Bolonki do get along well with dogs and other animals. Very clever and smart, they do well in formal training such as obedience, rally, tracking and agility when trained with a firm, but gentle, hand.

Russia was never known for its toy breeds, partly because of its harsh environment and its economic need for working dogs. Smaller breeds were considered superfluous and unnecessary, even more so during the Soviet Era under Stalin, when virtually no breeds besides working ones were bred.

When Khrushchev came to power in 1960, restrictions of propagating toy breeds lifted somewhat and the demand for these little dogs grew. During this time dogs were not imported to Russia, so breeds were developed by selections from already existing breeds including Lhasa Apsos, Toy Poodles, Shi Tzus, French Bolognese and Pekingese, as well as small, local, fluffy mongrel dogs of the Moscow and St. Petersburg area, where the breeding was centralized. The soft looping silky curls of today’s Bolonki were developed in response to and within the parameters of the scarcity and necessity that one encountered living in a Communist State, as water and fine shampoos and conditioners were not easily accessible. The focused development of a sociable toy breed was in part a response to scarce housing and the growth of apartments, where keeping large working dogs was not practicable. However, in an effort to inculcate some “working” attributes into the breed, guardianship of its territory was instilled into the Russian Tsvetnaya Bolonka.

Interest in the Russian Tsvetnaya Bolonka revived after the fall of the Iron Curtain in 1991. The standard for the breed was confirmed by the Russian Kennel Federation (RKF) in the summer of 1997.

Today, the Russian Tsvetnaya Bolonki are becoming increasingly popular and are being called the dogs of the 21st century. Bolonki could only be found occasionally in the United States prior to 2002 when, after long negotiations and agreements with the Russian Kennel Federation and the President of the National Russian Bolonka Club to honor and maintain the standard of its home country, Candace Mogavero of Faireland Kennel imported the first Bolonka from Russia. More importantly, the Bolonka came with the translated export pedigrees and legitimate papers needed in order for a rare breed to acquire American Kennel Club (AKC) recognition. Ladushki Ocharovashka, a bitch from breeder Elvira Romanenkova, was imported April 2000 and two more Tsvetnaya Bolonkas were imported the following years.

Routine health checks should include eye, patella, and heart examinations. To avoid patella injuries, young dogs should not be encouraged to jump until they are adults. Keeping topknots tied up will help to prevent corneal abrasions to the eyes. Although not found frequently in Bolonki, responsible breeders also screen their stock for health conditions such as liver shunt, Legg-Calve-Perthes disease and PRA.

The Russian Tsvetnaya Bolonka requires regular brushing and routine care for eyes, ears, teeth, and nails. Brush or comb the coat with a wide-tooth comb on a regular basis several times per week to prevent mats from forming. Dogs kept in full coat may need their face, mustache, and beard washed daily. For show purposes, no other trimming other than the feet is permitted, and the coat on the back should fall naturally and should not be deliberately parted. The eyes and ears should be checked frequently for foreign matter, injury, and irritation. Keeping the eyes clean will help avoid infections. Hair in the eyes can cause irritation, leading up to painful corneal scratches and ulcers. Drop ears are prone to infection, particularly after bathing or swimming, so be sure to keep ears clean and dry.

As classic lapdogs, Bolonki enjoy walks and playtime, but do not require a great deal exercise. They can be very energetic and play driven, however, and should have a good romp at least twice per week. In addition to walks, exercise can also come in the form of indoor activities, like hide-and-seek, chasing a ball rolled along the floor, or learning new tricks.

TrainingMore independent than is usual for a toy breed, Bolonki require early socialization with people. However, they are very friendly with children and other animals, though supervision is always a good idea. In addition, Bolonki may like to alert you to everything that is happening around them, so training them to understand when vocalizations are appropriate may be necessary. This breed is very clever and smart and does well in obedience, rally, tracking, and agility when trained with a firm, but gentle, hand.

The Russian Tsvetnaya Bolonka should do well on a high-quality dog food, whether commercially manufactured or home-prepared with your veterinarian’s supervision and approval. Any diet should be appropriate to the dog’s age (puppy, adult, or senior). Some dogs are prone to getting overweight, so watch your dog’s calorie consumption and weight level. Treats can be an important aid in training, but giving too many can cause obesity. Learn about which human foods are safe for dogs, and which are not. Check with your vet if you have any concerns about your dog’s weight or diet. Clean, fresh water should be available at all times.

Do you want to have your Russian Tsvetnaya be one of the best-trained dogs? Click here to find out how