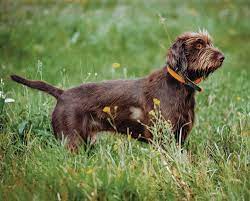 How to Train a Pudelpointer 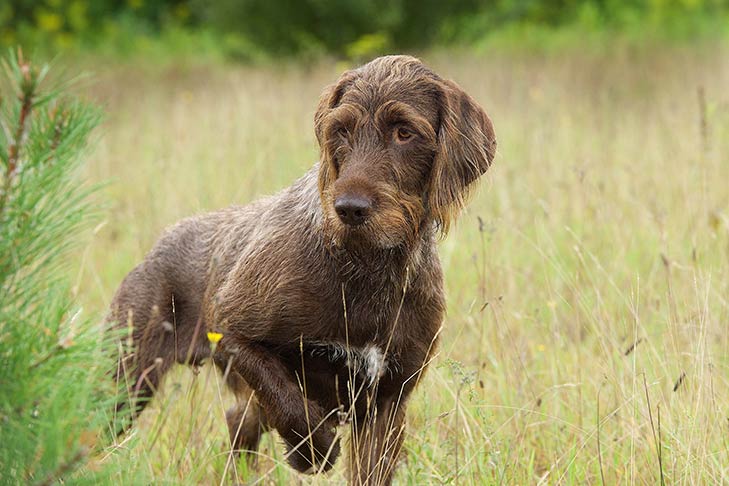 Want to learn how to train your Pudelpointer to be one of the best-trained dogs? Click here to find out how.

The Pudelpointer is a calm, self-controlled, versatile gun dog with a distinct hunting instinct and lacks game or gun shyness. In his native country of Germany, he has always ranked high in performance tests and in the field. This breed is enjoyed and valued for its desire and drive.

The Pudelpointer originated in Germany, created by crossing the Poodle with the Pointer. A versatile, genetically sound and healthy gun dog emerged from this cross and the breed is useful for all kinds of work in the fields, woods and water. His coat can be wire-haired, smooth/short, or rough and his coat color ranges from light brown to black. He may also have small white markings.

The Pudelpointer is a rough-coated pointing dog that originates from two breeds, the Poodle and the Pointer. The idea behind the breed was to create a dog that combined the Poodle’s intelligence, love of water, retrieving instincts, easy trainability, willingness to please, and protective coat with the Pointer’s endless desire to hunt, birdiness, pointing instincts, field nose and endurance.

The first cross of a Poodle and an English Pointer to establish the new breed took place in Germany in 1881. The sire was an English Pointer owned by Kaiser Frederick III named Tell and the dam, a Poodle named Molly, belonged to a famous Teutonic author on the subject of hunting dogs, Hegewald.

The Poodle’s genes, as a breed, seemed to have been more dominant in passing on. To alter this, many more Pointers than Poodles were introduced into the breeding program to arrive at what the Pudelpointer is today. During the first 30 years of breeding, only 11 Poodles were used as opposed to well over 80 Pointers. After that initial time period, only the occasional reintroduction of the Pointer was needed. After World Wars I and II, the breed became severely depleted and the reintroduction of the Pointer became important again to rebuild the breeding stock.

Germany, the Pudelpointer’s country of origin, attaches special significance to the breed’s state of health with special emphasis on the prevention of hip dysplasia (HD) and epilepsy in the breed. Some dogs may be faced with these health challenges in their lives, but the majority of Pudelpointers are healthy dogs. Working with a responsible breeder, prospective owners can gain the education they need to learn about specific health concerns within the breed.

The Pudelpointer has a close, flat-lying, hard, rough coat of medium length with a dense undercoat; as a result, he sheds seasonally. Beyond regular weekly grooming, the occasional bath will keep him clean and looking his best. Grooming can be a wonderful bonding experience for you and your dog. The strong, fast-growing nails should be trimmed regularly with a nail clipper or grinder to avoid overgrowth, splitting, and cracking. The ears should be checked regularly to avoid a buildup of wax and debris, which can result in infection. Teeth should be brushed regularly.

The Pudelpointer, as a hunting breed, needs regular exercise. Options for exercise could include play time in the backyard, preferably fenced, or being taken for walks several times a day. Exercise can also come in the form of indoor activities, like hide-and-seek, chasing a ball rolled along the floor, or learning new tricks. Certain outdoor activities like swimming, hiking, or retrieving balls or flying discs can provide a good outlet for expending energy. Note: The Pudelpointer absolutely loves the water! Training for dog sports like agility, obedience, and rally can also be a great way to give your dog exercise.

The Pudelpointer is a calm, self-controlled, versatile gun dog with a distinct hunting instinct and lacks game or gun shyness. Click To Tweet

The Pudelpointer should do well on a high-quality dog food, whether commercially manufactured or home-prepared with your veterinarian’s supervision and approval. Any diet should be appropriate to the dog’s age (puppy, adult, or senior). Some dogs are prone to getting overweight, so watch your dog’s calorie consumption and weight level. Treats can be an important aid in training, but giving too many can cause obesity. Learn about which human foods are safe for dogs, and which are not. Check with your vet if you have any concerns about your dog’s weight or diet. Clean, fresh water should be available at all times.

Want to learn how to train your Pudelpointer to be one of the best-trained dogs? Click here to find out how.