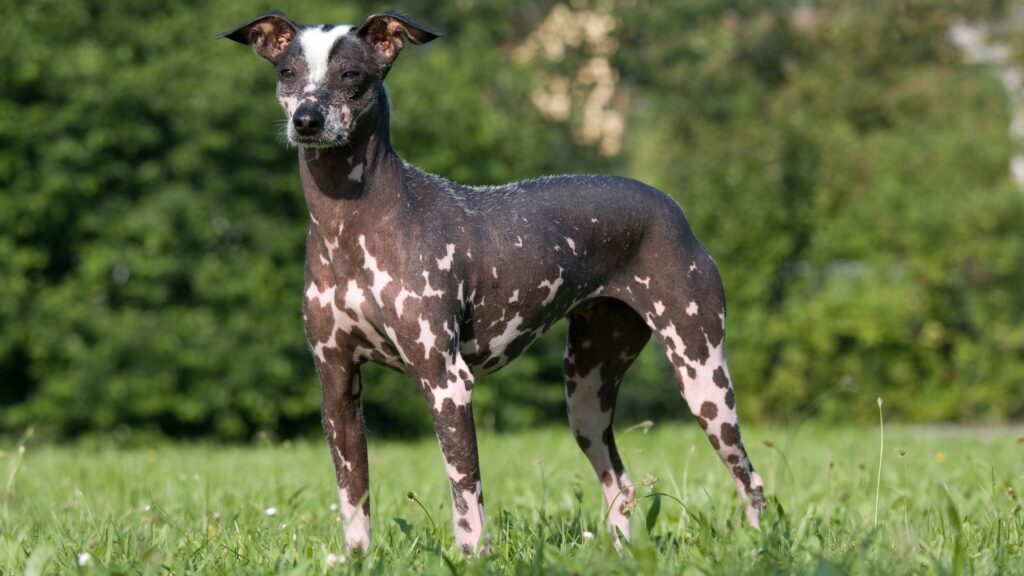 How to Train a Peruvian Inca Orchid

Agile, smart and swift, the Peruvian Inca Orchid is an elegant sighthound that developed in Peru. The breed can be hairless or coated, and comes in three sizes: small, medium and large. Lively and alert, these dogs can be very good hunters and do well in lure coursing, rally and agility. In the hairless variety, the skin can be of any color. In the coated variety, all colors are accepted including black, brown, gray, pink, tan and white.

These affectionate companion dogs are essentially sighthounds (think Greyhounds and Whippets) and have the same elegant contours of their racy cousins. PIOs come in a range of sizes: the smallest might stand just short of 10 inches; the largest top out at nearly 26 inches. Their distinguishing feature is, of course, hairlessness. The delicate skin can be a solid color or spotted with unpigmented areas. Coated PIOs are in the minority, and the coated and hairless varieties can occur in the same littler. Going by his general conformation, it is an elegant and slim dog, whose aspect expresses speed, strength and harmony without ever appearing coarse. Another particular feature is that the dentition in the hairless variety is nearly always incomplete, associated with the congenital alopecia. Noble and affectionate at home with those close to him, he is at the same time lively and alert. He might be wary of strangers and is a good watch dog. The breed is loyal and protective of his family, but like all dogs, should be supervised around younger children. Caution should also be taken with small pets that may be seen as prey.

The ancient history of the Peruvian Inca Orchid can be told through pottery and textiles. The breed first appeared in Moche pottery in 750 AD. They were also depicted in Chimu, Chancay, and Incan pottery. The Chancay people used the dogs as companions, and certain pottery even depicts them in sweaters. Their urine and feces were believed to be used in medicines. The Chimu considered them good luck and used the dogs’ warmth for the treatment of arthritis and respiratory conditions.

The original hairless dogs were small companion animals, but when Peru was conquered by the Conquistadors, the small dogs were interbred with the dogs of the foreigners and over the years, three distinct sizes developed. In the mountainous regions, the Andean people protected the dogs, but the breed did not fare well in the cities along the coast. There, the hairless dogs were considered diseased and pariahs and were often exterminated.

In 1966, an American, Jack Walklin, visited Peru and brought eight dogs back to the US. He is believed to be the one to have named the breed the Peruvian Inca Orchid and the breed was established under that name in the US and Europe. Germany registered the breed with the FCI in 1981.

In 1985, the Kennel Club of Peru accepted the breed and requested the FCI change the name to Perro sin Pelo de Peru (Peruvian Hairless Dog). In 2001, Peru declared the breed a National Patrimony and the dogs are now protected in Peru.

The majority of Peruvian Inca Orchids are healthy dogs. Working with a responsible breeders, those wishing to own a Peruvian Inca Orchid can gain the education they need to know about specific health concerns within the breed. Good breeders utilize genetic testing of their breeding stock to reduce the likelihood of disease in their puppies.

These are not outdoor dogs and require sunscreen on sunny days. Beyond regular grooming, the occasional bath will keep your Peruvian Inca Orchid clean and looking his best. Their nails can be trimmed when needed with a nail clipper or grinder to avoid overgrowth, splitting, and cracking. Ears should be checked occasionally to avoid a buildup of wax and debris, which can result in infection. Teeth should be brushed when needed.

The Peruvian Inca Orchid requires a good bit of activity to remain healthy and happy. Options for exercise include play time in the backyard, preferably fenced, or going on walks several times a day. Exercise can also come in the form of indoor activities, like hide-and-seek, chasing a ball rolled along the floor, or learning new tricks. If you live in an apartment, even short walks in the hallways can give your dog some exercise, especially during inclement weather. Training for dog sports like agility, obedience, and rally can also be a great way to give your dog exercise.

Peruvian Inca Orchids require a great deal of socialization and should be kept in the house, as they do not make good outdoor dogs. This breed is intelligent and can be a challenge to train. New owners should be able to commit to a substantial amount of time needed to train and socialize their new PIO puppy. Because they are a primitive breed, they have a wide range of temperaments, from a typical docile sighthound to a more feral temperament. PIOs are not recommended for families with small children, but they can do well with older, more considerate kids. Rough play is discouraged with puppies, as this can promote aggressive behavior. They can be raised with smaller dogs or cats, but require supervision.

The Peruvian Hairless should do well on a high-quality dog food, whether commercially manufactured or home-prepared with your veterinarian’s supervision and approval. Any diet should be appropriate to the dog’s age (puppy, adult, or senior). Some dogs are prone to getting overweight, so watch your dog’s calorie consumption and weight level. Treats can be an important aid in training, but giving too many can cause obesity. Learn about which human foods are safe for dogs, and which are not. Check with your vet if you have any concerns about your dog’s weight or diet. Clean, fresh water should be available at all times.