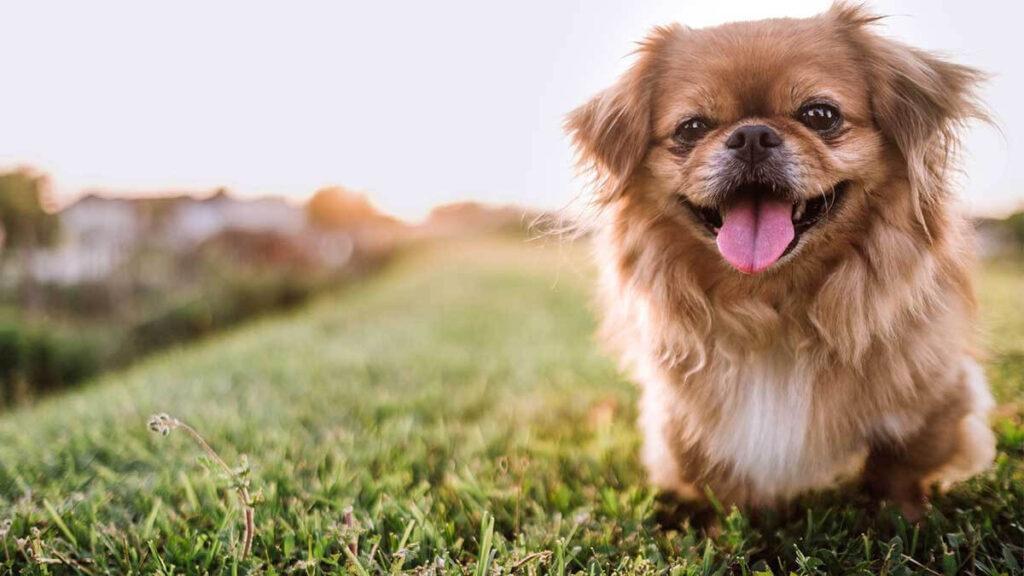 How to Train a Pekingese

Want to learn how to train your Pekingese to be one of the best-trained dogs? Click here to find out how.

The Pekingese, a compact toy companion of regal bearing and a distinctive rolling gait, is one of several breeds created for the ruling classes of ancient China. These are sophisticated dogs of undying loyalty and many subtle delights.
Pekingese are compact, stocky toy dogs weighing up to 14 pounds. The coat is longest at the neck and shoulders, giving Pekes their famous ‘lion’s mane.’ Coats come in various reds, from a golden-red to darker shades. The large, short-muzzled head is a wider-than-long ‘envelope shaped’ rectangle, and the eyes are large, dark, and sparkly. A unique feature of Pekes is their effortless ‘rolling’ gait. Pekes are charming, confident companions who develop a tight bond with their favorite human. Bred to live in palaces, they can be as serenely independent as the emperors who owned them. (They’re ‘opinionated,’ Peke people say.) Ever alert, they make good watchdogs. Pekes will tolerate kids but won’t stand for a lot of roughhousing.

A Chinese legend says the Pekingese was created by the Buddha, who shrunk a lion down to dog size. The breed is of such antiquity that we will never know its true beginnings, but the fanciful origin myth does contain a grain of probable truth. The Peke was likely bred down to toy size from a larger dog, not by the Buddha, of course, but by his earthly servants, the Chinese emperors and their courtiers. For many centuries, Chinese nobles were preoccupied with the breeding of flat-faced lapdogs. The Peke, Pug, and Shih Tzu are surviving samples of their handiwork. It is said that stealing one of these dogs was a crime punishable by death.

Pekes were unknown to the West until 1860, when British troops invaded Peking (Beijing) during the Opium Wars. As the Brits stormed the emperor’s magnificent summer palace with the intention of looting and burning it, the royal family killed their Pekes rather than see them fall into enemy hands. A British captain discovered the emperor’s aunt dead, a suicide, but five of her Pekes were still alive, hiding behind a drapery. The dogs were returned to England as a gift for a delighted Queen Victoria, and the breed quickly caught on among her subjects.

By the late 1890s, Pekes had arrived in America. They were first registered by the AKC in 1906. Six years later, the breed made headlines when a Pekingese was one of only three dogs to survive the sinking of the Titanic.

As with all short-faced breeds, it is important to choose a Pekingese with wide-open nostrils on a moderate-sized nose. Because Pekingese don’t have a long muzzle to act as a natural barrier of protection for the eyes, it is important to ensure that your environment is safe for your Peke and that nothing can jab or irritate his eyes. Pekingese appreciate cold temperatures, and therefore some owners travel with their Pekes on frozen ice packs, or an ice pillow, even for rides in the car, which provides a level of comfort that Pekingese thoroughly enjoy. Working with a responsible breeder, those wishing to own a Peke can gain the education they need to know about specific health concerns within the breed. Good breeders utilize health testing of their breeding stock to reduce the likelihood of disease in their puppies.

The thick double coat of the Pekingese requires a good bit of maintenance. Pekingese shed seasonally. Brushing him at least one hour per week will help to remove loose hairs and prevent matting, and an occasional bath will help to keep him looking his best. Mats or tangles can be gently worked out with a slicker brush or metal comb. As with all breeds, the nails should be trimmed regularly, as overly long nails can cause the dog discomfort.

The Pekingese, a compact toy companion of regal bearing and a distinctive rolling gait, is one of several breeds created for the ruling classes of ancient China. Click To Tweet

Pekingese are charming, confident companions who develop a close bond with their people. Their whole purpose in life is to amuse and comfort. Although they are fairly sedate most of the time and have only modest exercise requirements, they do enjoy participating in canine sports at their own pace.

A hallmark of the breed is their friendly, outgoing, loving personality. Pekes are affectionate and intelligent and develop very strong connections to their people. As dogs who for centuries lived in palaces, Pekes can be as serenely independent as the emperors who owned them. (They’re ‘opinionated,’ Peke people often say.) Ever alert, they make good little watchdogs. Pekes might tolerate children, but are not appropriate for children to roughhouse with.

The Pekingese should do well on a high-quality dog food, whether commercially manufactured or home-prepared with your veterinarian’s supervision and approval. Any diet should be appropriate to the dog’s age (puppy, adult, or senior). Some dogs are prone to getting overweight, so watch your dog’s calorie consumption and weight level. Treats can be an important aid in training, but giving too many can cause obesity. Learn about which human foods are safe for dogs, and which are not. Check with your vet if you have any concerns about your dog’s weight or diet. Clean, fresh water should be available at all times.

Want to learn how to train your Pekingese to be one of the best-trained dogs? Click here to find out how.