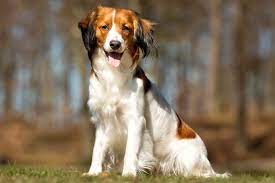 How to Train a Nederlandse Kooikerhondje

Want to learn how to train your Nederlandse Kooikerhondje to be one of the best-trained dogs? Click here to find out how.

The Nederlandse Kooikerhondje is lively, agile, self-confident, good-natured, and alert. The breed is faithful, easy-going, and friendly in the home. Outdoors he is a true sporting dog being keen, swift, tough, attentive, and energetic. With sufficient perseverance and stamina, he enjoys working and does so with a cheerful character.

The Kooikerhondje (Koi-ker-hond-yuh)the little white and orange dog with a big heart is a sporty, eye-catching fellow with a silky all-weather coat of white with red patches. They are instantly recognizable thanks to their large, black-tipped ears and the richly feathered tail they wag proudly. The breed has the sturdy bone structure expected of a serious hunter, but the overall picture is that of a harmoniously built dog of smooth, flowing contours and springy gait. The Nederlandse Kooikerhondje Club of the United States has served as the AKC Parent Club to represent the Kooikerhondje since April 2014.

The Nederlandse Kooikerhondje is a very old breed, appearing in paintings by the Dutch masters back into the late Middle Ages.  The breed was used in the “Eendenkooi” the manmade duck-trapping pond systems, beginning prior to the invention of gunpowder.  These “Duck Decoys” – as they were called in English – are not to be confused with carved wooden faux ducks, but were instead hand-dug ponds ranging from 3 to 10 acres in size.  The breed was also associated with the founder of the Dutch Monarchy, Prince William of Oranje, whose “Kooiker” Kuntz was credited with saving the Prince’s life when assassins sought to kill him.

The breed began to diminish after the First World War as better fowling guns meant hunters could shoot ducks more readily.  The Duck Decoys were not as profitable, the effort to maintain them less desirable, and with their disappearance so too came the decline of the little orange-red and white dog used to lure the ducks.

In late 1939, as part of her silent resistance to the occupation of the Netherlands, the Baronesse von Hardenbroek van Ammerstol set out to preserve the breed.  She sent peddlers who stopped at her estate off with a black and white photograph of the breed and a snippet of fur.  When the peddler spotted a dog that seemed to match Baronesse’s requirements, she then took to her own bicycle to visit the dog.  In this way, she found Tommy, a bitch from the farthest north province in the Netherlands who became the foundation.  The Baronesse bred 52 litters under the name Walhalla from 1942 to 1976.  The Dutch parent club was organized in 1967, and the breed was officially recognized by the Raad van Beheer (the Dutch equivalent of AKC) in 1971.

Beyond regular weekly grooming, the occasional bath will keep the Nederlandse Kooikerhondje clean and looking his best. Grooming can be a wonderful bonding experience for you and your dog. The strong, fast-growing nails should be trimmed regularly with a nail clipper or grinder to avoid overgrowth, splitting, and cracking. Ears should be checked regularly to avoid a buildup of wax and debris, which can result in infection. Teeth should be brushed regularly.

The Nederlandse Kooikerhondje is lively, agile, self-confident, good-natured, and alert. The breed is faithful, easy-going, and friendly in the home. Click To Tweet

The Kooikerhondje is a cheerful, intelligent and lively but not hyper companion. The nature of the historic work for this small sporting breed means that they have prey drive and energy along with the sensitive character of a spaniel. They can be very determined, and are best trained with a firm attitude and gentle methods. The cheerful personality, athletic build, intelligence, and eager-to-please attitude makes the Kooikerhondje a highly trainable dog. However, their drive and determination means that they do need that gentle training to fulfill their promise as charming household pets and sporting companions.

The Nederlandse Kooikerhondje should do well on a high-quality dog food, whether commercially manufactured or home-prepared with your veterinarian’s supervision and approval. Any diet should be appropriate to the dog’s age (puppy, adult, or senior). Some dogs are prone to getting overweight, so watch your dog’s calorie consumption and weight level. Treats can be an important aid in training, but giving too many can cause obesity. Learn about which human foods are safe for dogs, and which are not. Check with your vet if you have any concerns about your dog’s weight or diet. Clean, fresh water should be available at all times.

Want to learn how to train your Nederlandse Kooikerhondje to be one of the best-trained dogs? Click here to find out how.