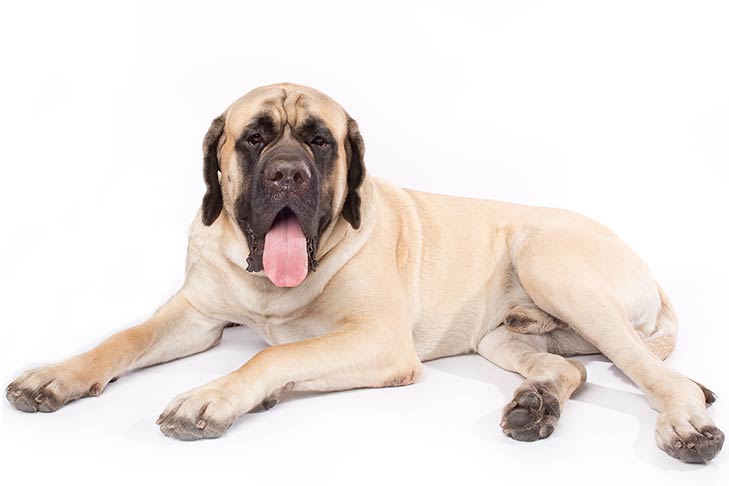 How to Train a Mastiff

Do you want to have your Mastiff be one of the best-trained dogs? Click here to find out how

The colossal Mastiff belongs to a canine clan as ancient as civilization itself. A massive, heavy-boned dog of courage and prodigious strength, the Mastiff is docile and dignified but also a formidable protector of those they hold dear. For the uninitiated, a face-to-face encounter with these black-masked giants can be startling. A male stands at least 30 inches at the shoulder and can outweigh many a full-grown man. The rectangular body is deep and thickly muscled, covered by a short double coat of fawn, apricot, or brindle stripes. The head is broad and massive, and a wrinkled forehead accentuates an alert, kindly expression. Mastiffs are patient, lovable companions and guardians who take best to gentle training. Eternally loyal Mastiffs are protective of family, and a natural wariness of strangers makes early training and socialization essential. Mastiffs are magnificent pets, but acquiring a powerful giant-breed dog is commitment not to be taken lightly.

In tracing the history of this noble breed, we can avoid confusion by noting the distinction between mastiffs, with a lowercase “m,” and Mastiffs, the traditional giant breed of England, sometimes called the Old English Mastiff. Dogs known as mastiffs have been known around the world for thousands of years. Surviving evidence from ancient Egypt, Greece, Rome, China, and Tibet all bear traces of ferocious giant canines classified as mastiffs. The Tibetan Mastiff and Neapolitan Mastiff are examples of these ancient breeds that have endured to this day.

The British mastiff type, the AKC breed we know as the Mastiff, is a similarly ancient breed. When Julius Caesar led an invasion of Britain in 55 BC, he was impressed by the mastiffs who helped defend the island against his legions and made note of it in his campaign journal. British mastiffs were brought back to Rome to battle wild beasts and human gladiators in the arena.

The Mastiff as we know it came into focus in medieval England, used as big-game hunters, nighttime guardians of estates, and war dogs. In Canterbury Tales, Chaucer calls them “Alaunts” (a French breed name) and says they were “as great as any steer/To hunt at the lion or the deer.” Mastiffs fought alongside the British against the French in 1415 at the Battle of Agincourt, later immortalized by Shakespeare.

At the end of World War II, England stood victorious but depleted. It was estimated that only 14 Mastiffs survived in the entire country. The Mastiff population was rebuilt with the help of U.S. breeders who exported specimens from good British stock back to the mother country. Today’s Mastiff is more docile and friendly than his ancient forebears, but no less courageous.

The Mastiff Club of America (MCOA) provides in-depth information on breed health. Responsible breeders screen their stock for health conditions such as seasonal allergies, eye anomalies, heart disease, cancer, eye and hip dysplasia, von Willebrand’s disease, degenerative myelopathy, and epilepsy. Hygromas’ harmless natural ‘cushions’ that protect the elbow joints when the Mastiff is lying on hard surfaces’ are common. Do not allow the vet to drain them. Finally, Mastiffs can experience bloat, a life-threatening condition where the stomach suddenly distends and often twists as well. Owners should educate themselves as to what symptoms indicate this is occurring and what to do should it occur.

The Mastiff’s short, dense coat is easy to groom, usually requiring only a quick brushing every few days. During periods of heavy shedding once or twice a year, more frequent sessions with a strong, toothed comb are recommended to remove dead hair. The ears and the deep wrinkles around the Mastiff’s head, eyes, and muzzle should be regularly inspected and cleaned, and the nails trimmed short. Finally, Mastiffs drool! Most owners keep cloths at hand to wipe ‘slingers’ off their Mastiff’s face and their own and visitors’ clothing.

Bred to be guardians of ‘hearth and home,’ Mastiffs have comparatively low exercise requirements and can live happily in an apartment. They benefit physically and psychologically from free play and daily walks’ a mile or two for adult Mastiffs. However, owners must be careful not to overtax growing puppies and young adults: Don’t allow them to run up and down stairs, jump from heights, or engage in long walks. Begin with no more than half a block for a 2- to 3-month-old puppy. Additionally, Mastiffs are notorious for plopping down during walks when they are tired or overheated. Therefore, a rule of thumb is to not walk them farther than you can carry them back!

Obedience training and early socialization are ‘musts’ for Mastiffs. Mastiffs learn quickly and want to please. However, the repetitions in a typical training class will quickly bore them, at which point they may lie down, snoring. Make eye contact with your Mastiff; they communicate a great deal with their eyes, and they are excellent at reading your expressions and body language. Use praise and positive rewards’ you can easily hurt their feelings by raising your voice. Hold several short sessions during the day, keeping it fun and varied. When treated with love, inclusion, and respect, Mastiffs can be trained to excel in almost any sphere.

For rapidly growing giant breeds such as the Mastiff, proper nutrition is critical through puppyhood and up to 2 years of age. Slow and steady growth is optimal. If fed a densely caloric diet lacking an appropriate calcium/phosphorous ratio, Mastiff puppies and young adults are prone to skeletal disorders. Most breed experts recommend that puppies start on an adult dog food formulation with a protein percentage no higher than 26 percent, and a calcium/phosphorous ratio of approx.1.2:1. Feeding scheduled meals is recommended, rather than free-feeding, to avoid excessive weight gain.

Do you want to have your Mastiff be one of the best-trained dogs? Click here to find out how