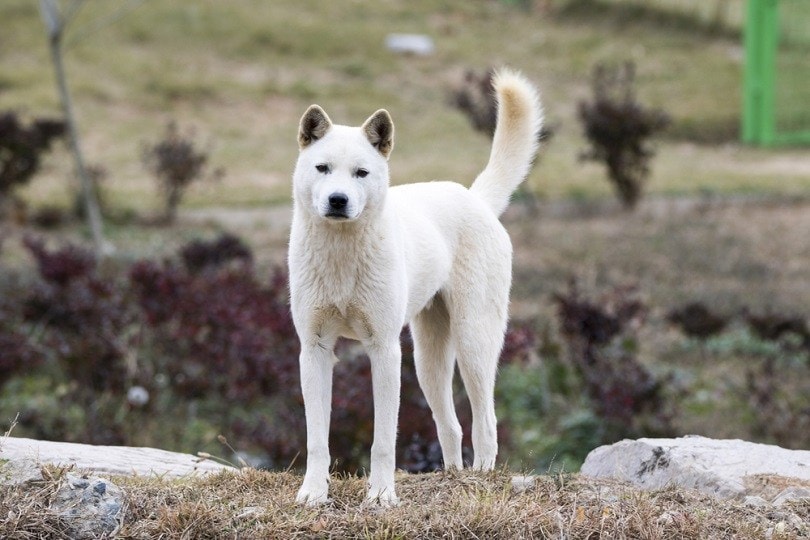 How to Train a Jindo

Want to learn how to train your Jindo to be one of the best-trained dogs? Click here to find out how.

Loyal, watchful, and intelligent, the Jindo developed as a breed on an island off the coast of South Korea. Medium-sized and natural in appearance, they are valued as independent hunters, discerning guardians, and loyal companions.

The Korea Jindo Dog is a well-proportioned, medium-sized dog used for hunting and guarding. With erect ears and a rolled or sickle-shaped tail, it should be a vivid expression of agility, strength, alertness, and dignity. The Jindo has a very strong instinct for hunting and is bold, brave, alert, and careful, not tempted easily and impetuous. But most of all he is extremely faithful to his master. On the whole, he is not fond of other animals, especially males. He also has a good sense of direction. A one-man dog, he readily accepts a new master, but never forgets his attachment towards the former master who raised him from puppyhood. He keeps himself clean and eats sparingly.

The Jindo breed originates from an island located off the southwest coast of South Korea. The breed name is taken from the name of the island, Jindo. The dogs lived unrestrained on the island alongside their owners for thousands of years to develop into a natural breed with reputable hunting abilities. The Jindo was designated as Republic of Korea Preservation of Cultural Assets Act No. 53 in 1962. In short, the dog is simply called Korea Natural Treasure #53. In its native country, Jindos are called Jindo-kae or Jindo-kyon. Kae or Kyon are Korean words for dog. Internationally, they are the Federation of Cynologique Internationale Standard No. 334. In the United States, they have been entered into the American Kennel Club – Foundation Stock Service since 2008.

Jindos are generally a healthy and long-lived breed with few known health issues. The lifespan for Jindos is often 14 years or more, and most live long, healthy lives. There are very few reported health issues within the breed. The most common health problems encountered are allergies and hypothyroidism. There have been a few isolated cases of cataracts and hip dysplasia within the breed. Systematic health testing has not been the norm until recently, so the true hip and eye status of the breed has yet to be fully explored.

The Jindo is a fastidious breed whose double coat requires weekly brushing with a slicker or pin brush. They are known for being extremely meticulous and clean. Their double coat repels dirt and water, and they do not normally produce an odor. Throughout most of the year, their coat requires little more than weekly brushing to keep shedding at a minimum and the occasional bath for them to look their best. As with all double-coated breeds, twice a year the Jindo ‘blows’ its coat. During this time, the entire undercoat is shed over the course of a month or more, and both regular brushing of the dog and vacuuming of the home are required.

The Jindo is a high-energy hunting and guard dog with impeccable house manners. They were developed as a serious hunting dog capable of traveling many miles and taking down small and large game. This very athletic breed requires a reasonable amount of physical and mental stimulation. Be it guarding acreage or performing tricks for the neighbors’ kids, Jindos love having a job to do and their needs are fairly easily met in an active household. They enjoy sports like lure coursing and agility, have run on sled dog teams, and are happy to turn their athleticism to any active task, even if that task is simply a nice long walk. Inside the home, Jindos are polite and attentive. They will often follow their owner from room to room, not being clingy but happy to curl up in a corner where they can simply be near and watch over their person or family. If given an active outlet, they seldom bother anything in the home that is not theirs, and they are not a destructive breed.

Want to learn how to train your Jindo to be one of the best-trained dogs? Click here to find out how