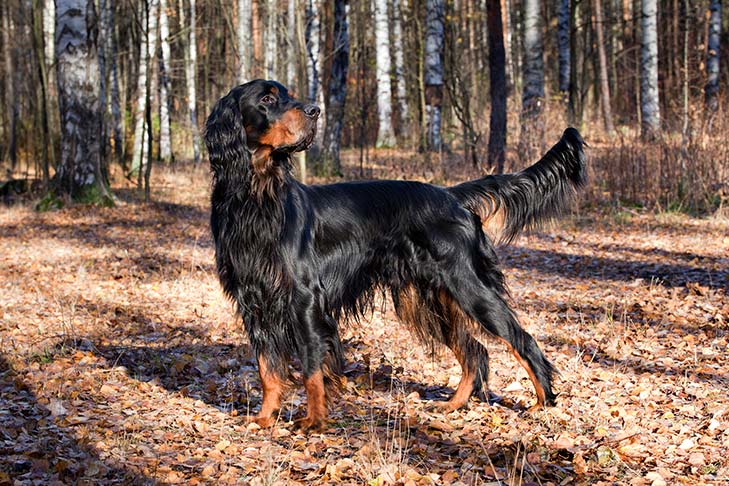 How to Train a Gordon Setter

Want to learn how to train your Gordon Setter to be one of the best? Click here for more information

The Gordon Setter, the black avenger of the Highlands, is a substantial bird dog named for a Scottish aristocrat. Athletic and outdoorsy, Gordons are bold, confident, and resolute in the field, and sweetly affectionate by the fireside. Gordons are the largest and most substantial of setters’ a big male might stand 27 inches at the shoulder and weigh 80 pounds. The stunning coat is a glistening black, with tan markings and long hair on the ears, belly, legs, chest, and tail. Tan spots above the bright brown eyes point up a wise and willing expression. Like other Scots breeds, from the compact Scottish Terrier to the majestic Scottish Deerhound, Gordons were built to withstand their homeland’s tough terrain and foul weather.

Gordon Setters first started to hunt game birds almost 200 years ago. The setter was developed to lay down quietly, or “set,” when they located birds. This style of hunting at the time would then require the hunter to cast a net in the area, sometimes covering the dog as well, and flush and harvest the birds that were ensnared there. The 19th century saw a divergence of Setters into different breeds, evolving based on their location and the terrain in which they hunted. The Gordon Setter’s heavy bone and square frame suggests its usefulness in the difficult, craggy landscape of Scotland.

An important figure in this breed’s development was Alexander Gordon, the Fourth Duke of Gordon and a setter fancier (d. 1827), who founded a kennel of “Black and Tan Setters” at Gordon Castle. Though his early dogs looked more like the English Setter, crosses with the flat-coated black and tan collie, Bloodhounds, black Pointers, and solid-black setters helped mold the Gordon Setter breed into what it is today.

The United States saw its first import of Gordon Setters in 1842 when George Blunt of New York brought a male and female named Rake and Rachael.

In 1872, the British Kennel Club declared the Black and Tan Setter an official breed. In 1878, the breed was registered in America as well and recognized by the AKC in 1884. Eight years after that, the AKC changed the breed’s name from the Gordon Castle Setter to the Gordon Setter. It was not until January 1, 1924 that the Kennel Club accepted the Gordon Setter name as well.

Gordons are generally healthy dogs, but there are a few concerns to be aware of bloat, a sudden, life-threatening stomach condition, can occur in the breed. Gordon owners should learn the signs of bloat and what to do should they occur. Cancer is the most common cause of death for elderly dogs’¿in all breeds. There is not one specific type of cancer more prevalent in Gordons; young dogs dying of cancer is unusual. Responsible breeders will test their stock for conditions the breed can be prone to, including screening for elbow and hip dysplasia and eye conditions, and DNA testing for a number of health-related issues.

Brushing at least weekly is essential to prevent matting. Shedding is minimal if the dog is brushed regularly. Monthly grooming recommended for health includes trimming the hair on the feet, trimming the nails, trimming inside and around the ears, trimming around the vent/tail area, and checking the teeth for plaque. Bathing monthly is recommended. Dry skin and dandruff can be prevented with bathing and conditioning.

Gordons were bred to be personal hunting dogs, and they also served as nannies. They live to cuddling by your side or at your feet, as well as running in a field. Their genetic makeup calls for them to have a drive to run, so they do need exercise. They can live in an apartment but if so, they need daily exercise, which can be met by walking, jogging, or biking with the dog. If they have a yard in which to run, they will self-exercise, though a Gordon will always be happiest doing something with their bonded owner. Being with their owner is what they live to do. Caution: To prevent bloat, never exercise the dog one-half hour before or one-half hour after feeding.