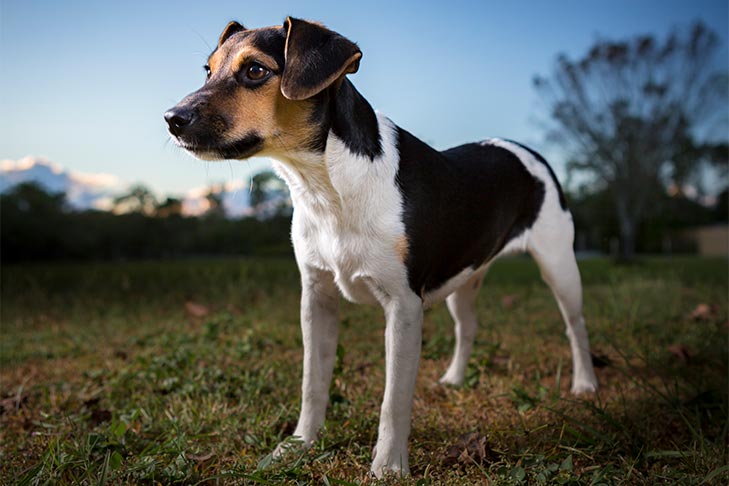 How to Train a Danish-Swedish Farmdog 

Known as the Little Big Dog, the Danish-Swedish Farmdog is a companion dog that loves to work and enjoys a challenge. They are small, compact, and slightly rectangular dogs, known to mature late. This breed entered the American Kennel Club Foundation Stock Services Program (AKC FSS) in 2011. They are eligible to compete in Agility, Barn Hunt, Flyball, Herding, Lure Coursing, Nosework, Obedience, and Rally, Tracking, and AKC FSS Open Shows.

Until a few decades ago, the small farmer’s dog, originally known as the Danish Pincher, was a natural part of Danish rural life. The Danish-Swedish Farmdog’s everyday functions were many, including mouser/ratter, livestock herder, hunting dog, watchdog and family companion. As lifestyles have changed, smaller family farms have become rarer and so too has the faithful working Farmdog. Efforts from the Danish and Swedish Kennel Clubs to bring back this breed culminated in 1987 with the first breed standard for the Danish-Swedish Farmdog. In 1998, a DSF was imported to the United States to establish the first official breeding program there. The FCI Standard for the breed was officially published on March 26, 2009. The Danish-Swedish Farmdog was recorded in the American Kennel Club Foundation Stock Services in 2011, its first step to its goal of becoming fully recognized by the AKC.

Over the years, the DSF has proven to be a healthy breed, free of commonly reoccurring health issues, genetic or otherwise. Working with a responsible breeder, those wishing to own a Danish-Swedish Farmdog can gain the education they need to know about specific health concerns within the breed. Good breeders utilize genetic testing of their breeding stock to reduce the likelihood of disease in their puppies.

The Danish-Swedish Farmdog is an easy dog to groom, care for and maintain. Being very low maintenance, the occasional brushing and bath are all that is needed to keep them clean and looking their best. If necessary, their nails can be trimmed with a nail clipper or grinder to avoid overgrowth, splitting and cracking. Their ears should be checked to avoid a buildup of wax and debris which can result in an infection. Teeth can be brushed.