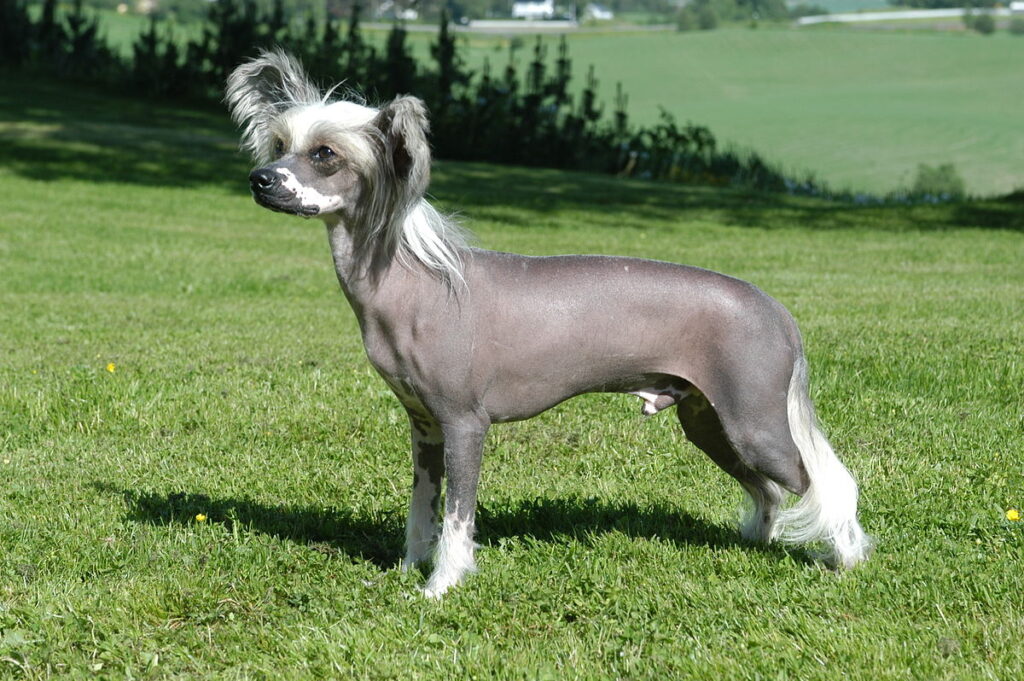 How to Train a Chinese Crested 

Do you want to have your Chinese Crested be one of the best-trained dogs? Click here to find out how

With their spotted pink skin, spiky ‘crested’ hairdo, furry socks, and feathery tail, you can’t mistake the sweet and slender Chinese Crested for any other breed. This frolicsome, ultra-affectionate companion dog is truly a breed apart. The Chinese Crested, a lively and alert toy breed standing between 11 and 13 inches high, can be hairless or coated. The hairless variety has smooth, soft skin and tufts of hair on the head, tail, and ankles. The coated variety, called the ‘powderpuff,’ is covered by a soft, silky coat. Besides the coat, there’s very little difference between the powderpuff and his undressed brother. Both varieties are characterized by fine-boned elegance and graceful movement. Cresteds are as fun as they look: playful, loving, and devoted to their humans. The hairless has its advantages: there is no doggy odor, and for obvious reasons shedding isn’t much of a problem. Both varieties are attentive housemates, totally in tune with their family.

Chinese Crested origins go so far back in time, we can make only educated assumptions about how the breed was created. It is thought that in ancient times large hairless dogs from Africa were brought to China, where after generations of breeding they were reduced in size. (The Chinese were the master miniaturizers of the ancient world; the Shi Tzu and Pekingese are two further examples of breeds born of Chinese mini-mania.)

Chinese trading vessels traveled the high seas with Cresteds onboard. The dogs became famous as shipboard exterminators, expert at catching disease-bearing rats. They were traded among sailors in seaports around the world and, along the way, acquired the name Chinese Ship Dog.

Their far-flung travels brought Cresteds to exotic ports of call—Egypt, Turkey, South Africa, among them—where local variations of the breed were cultivated. So thoroughly was the small hairless ratter disseminated around the world that, during the Age of Discovery, European explorers recorded sightings of Crested-type dogs in port towns of Central and South America, Asia, and Africa.

The Crested took root in the United States through the efforts of two women, journalist Ida Garrett and breeder Debra Woods. For several decades beginning in the 1880s, they promoted the Crested in America—Garrett through her prolific writing and speaking, and Woods through her breeding program and scrupulously kept studbooks. The American Chinese Crested Club was formed in 1979, and in 1991 the breed entered the AKC Stud Book.

Among the many nicknames, this unusual breed has acquired over the years is the “Dr. Seuss Dog,” a reference to the hairless Crested’s resemblance to fanciful creatures who populate the books of the beloved author-illustrator.

Responsible breeders consistently screen their breeding stock for inherited eye problems that are known to occur in the Chinese Crested, including progressive retinal atrophy, glaucoma, and primary lens luxation. Epilepsy occurs in the breed occasionally. Patellar luxation (slipped stifles) affects Cresteds, as it does most small breeds. Legg-Calve-Perthes disease has no DNA test to screen parents, but it does sometimes show up on X-ray.

You might think that the hairless variation of the Chinese Crested would require almost no grooming. After all, he has no hair. However, because his skin is exposed, the hairless Crested is prone to skin irritations, allergies, and sunburn. Careful grooming, including skin treatments specifically for your dog’s skin type, sunscreen, and acne lotions are necessary to maintain a healthy pet. The Powderpuff version needs to be brushed daily to maintain his fluffy coat. The Powderpuff’s coat is different than that of most other dogs. The undercoat is shorter than the longer overlay, which is the opposite of most haired breeds. This makes them easier to brush, but the coat can mat quickly.

The exercise needs of the Chinese Crested can usually be satisfied with daily short walks with his owner and play-sessions in his backyard. It is good for the Crested to exercise outdoors, but care must be taken to use either sunscreen or place protective clothing on him. These are tough little dogs who can be very competitive in canine sports.

The Chinese Crested loves to spend time with his owner. This makes him a great candidate for competitive sports such as agility, flyball, and obedience, and they make great therapy dogs. They also enjoy and do well at lure coursing. They have a very sensitive nature and must be trained with gentle patience. Harsh words and negative actions on your part can damage your relationship to the point that he will not be interested in learning further from you.

A high-quality dog food appropriate to the dog’s age (puppy, adult, or senior) and ideally formulated for small or toy breeds will have all the nutrients the Chinese Crested needs. Some dogs are prone to getting overweight, so watch your dog’s calorie consumption and weight level. Treats can be an important aid in training, but giving too many can cause obesity. Give table scraps sparingly, if at all, especially avoiding cooked bones and foods with high fat content. Learn about which human foods are safe for dogs, and which are not. Check with your vet if you have any concerns about your dog’s weight or diet.

Do you want to have your Chinese Crested be one of the best-trained dogs? Click here to find out how