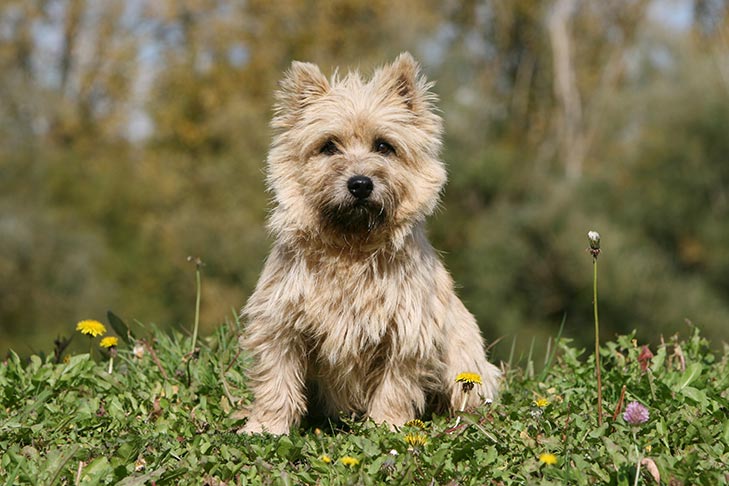 How to Train a Carin Terrier

Cairn Terriers are happy, busy little earthdogs originally bred to fearlessly root out foxes and other small, furred prey in the rocky Scottish countryside. Curious and alert, Cairns like having a place where they can explore and dig. The Cairn’s unique qualities, called ‘Cairnishness,’ inlude a short, wide head and a free-moving, short-legged body that exudes strength but not heaviness, topping out at about 10 inches high and about 15 inches long. The double coat is harsh and wiry on top and downy beneath. A Cairn presents as a small, shaggy, alert dog, with head, tail, and ears up, and eyes shining with intelligence. A British breed club promotes Cairns as the ‘best little pal in the world.’ cairns are small enough for a lap-top snuggle and sturdy enough for a good romp on the lawn. They do best with lots of close family contact. No other breed will do for owners who cherish the terrier qualities of gameness, independent thinking, and true-blue loyalty.

The Cairn is one of several terrier breeds, some still extant others now extinct, who for centuries patrolled the game preserves and farms of Scotland. Unraveling the histories of these breeds is difficult because, for so many years, they were lumped together as simply Scotch terriers. Not until the late 1800s did breed fanciers devise strict breeding programs and classifications for this hardy family of exterminators. The name Cairn Terrier did not appear in print until 1887, though by then, the Cairn-type terrier had been around for a long time. Cairns were known from at least the 1600s to dwell in the Western Highlands, most notably on the Isle of Skye, birthplace of their kinsman the Skye Terrier.

Once in Scotland, a mound of stones used as a boundary or to mark a grave was called a “cairn.” On Highland game preserves, rodents would live within and beneath these rock piles. The Cairn Terrier, among the smallest go-to-ground terriers, was developed to dig into cairns and rout out the critters. These plucky little hunters also worked on foxes, otters, and other predators when grouped in packs. The Cairn’s independence, courage, toughness, and alertness were qualities that served them well when digging into a cairn alone and confronting sharp-toothed mammals.

By the turn of the 20th century, Britain’s terrier fanciers had sorted out the various Scotch earthdogs and began breeding Cairn, Scottish, Skye, and West Highland White terriers as distinct pure breeds. Cairns were exhibited at British dog shows of the era, and the AKC recognized the breed in 1913.

The breed’s public profile received a tremendous boost in 1939, when a Cairn named Terry was chosen to play Toto in MGM’s production of “The Wizard of Oz.”

Cairn Terriers are generally healthy dogs, and responsible breeders test their stock for health disorders and communicate with other dedicated breeders regularly, working together for breed health and preservation of the breed’s unique qualities.

Cairn Terriers are generally easy keepers, although weekly brushing and combing are recommended, as well as periodic hand-stripping to maintain the coat’s texture. Having a comb and soft slicker brush handy will help with the grooming tasks. With a new puppy, spending time together in grooming sessions helps to accustom him or her to being worked with and is an opportunity to develop the bond between you. The nails should be trimmed regularly, as overly long nails can cause the dog discomfort.

Cairns require a moderate amount of exercise and can adapt well to various living situations when given daily outings. They can thrive anywhere from a Highlands farm to an urban high-rise and are excellent all-around dogs. Training for dog sports provides an ideal outlet for their energy. The breed exercises body and mind by participating in obedience, tracking, herding, agility, earthdog events, coursing ability tests, and other activities that dog and owner can enjoy together.