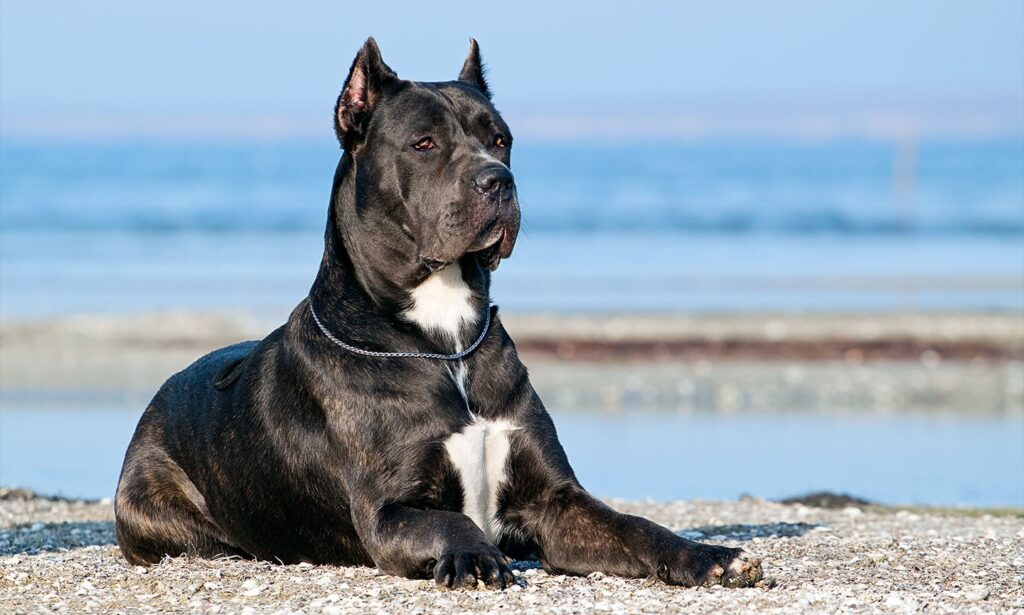 How to Train a Cane Corso

Want to learn how to train your Cane Corso to be one of the best-trained dogs? Click here to find out how.

Smart, trainable, and of noble bearing, the assertive and confident Cane Corso is a peerless protector. The Corso’s lineage goes back to ancient Roman times, and the breed’s name roughly translates from the Latin as ‘bodyguard-dog.’

At nearly 28 inches at the shoulder and often weighing more than 100 pounds, with a large head, alert expression, and muscles rippling beneath their short, stiff coat, Corsi are at a glance intimidating creatures. Their imposing appearance is their first line of defense against intruders. As one writer put it, ‘An understated air of cool competence, the kind of demeanor you’d expect from a professional bodyguard, is the breed’s trademark.’ Corsi are intelligent, loyal, eager to please, versatile, and intensely loyal to their humans, but are also assertive and willful, and can end up owning an unwitting owner. As with any other big guardian dog, responsible breeding and early socialization with people and other dogs is vital.

The Cane Corso (KAH-neh-KOR-soh; plural: Cani Corsi) belongs to a subcategory of working breeds called molossus dogs, or followers, named for the Molossi, an ancient Greek people thought to have bred giant, big-boned guardian dogs of Mastiff type. At the height of the Roman Empire’s power, the legions that subdued and occupied the Greek islands brought followers back to Italy and bred them to native Italian breeds.

The offspring produced by these crosses were ancestors of the modern Corso and its larger relative, the Neapolitan Mastiff. The original Corsi were used as dogs of conquest who earned their stripes as “pireferi,” fearless dogs who charged enemy lines with buckets of flaming oil strapped to their backs. It is supposed that these early Corsi were bigger, more lumbering dogs than today’s sleeker version, which moves with catlike grace.

With the dissolution of the Western Empire in the fifth century, Italy’s legions and their dogs were out of work. Corsi adapted to such civilian jobs as wild boar hunting, farming, livestock droving, and most famously, guarding farmsteads and henhouses. The Corso was for centuries a familiar sight on the farms and pastures dotting the Italian countryside. But the effects of constant invasions of the Italian peninsula and Sicily, economic and political upheavals, and mechanized farming conspired to reduce the Corso population to precariously low numbers. By the mid-20th century, the breed was all but extinct.

Specimens did survive, however, in Italy’s backcountry. In the 1970s, a group of Italian fanciers banded together to revive the breed of their rustic ancestors. The Society Amorati Cane Corso (Society of Cane Corso Lovers) was formed in 1983, and by the following decade, Corsi were being exhibited in European dog shows. The first Corso import arrived in America in 1988, and in 2010 the breed was recognized by the AKC.

Cane Corsos are generally healthy dogs, and responsible breeders screen their stock for health conditions such as hip dysplasia, idiopathic epilepsy, Demodex mange, and eyelid abnormalities. Large and deep-chested breeds are susceptible to bloat, a sudden, life-threatening stomach condition. Cane Corso owners should learn what signs to look out for, and what to do should they occur. As with all breeds, a Cane Corso’s ears should be checked regularly for signs of infection, and the teeth should be brushed often, using a toothpaste designed for dogs.

The Cane Corso’s coat is short, but double-layered. The undercoat, which varies in length depending on the climate the dog lives in, sheds throughout the year, especially during shedding season in the spring. Weekly brushing’”daily during shedding season” with a medium-bristle brush, a rubber grooming mitt or tool, or a hound glove will remove the dead hair before it can fall onto the furniture, and it helps remove dirt and promotes new hair growth as well. As with all breeds, the nails should be trimmed regularly, as overly long nails can be painful to the dog and cause problems walking and running.

Cane Corsos need serious exercise. A brisk walk or better yet, run of at least a mile in the morning and again in the evening will sustain their health and muscle tone. They make great companions on long walks, hikes, or bicycle rides. The Cane Corso was bred to work and is happiest when given a job to do. He needs mental as well as physical stimulation, or undesirable behavior will result. Many Cane Corsos compete in agility, obedience, dock diving, protection sport, and tracking events.

Smart, trainable, and of noble bearing, the assertive and confident Cane Corso is a peerless protector. The Corso's lineage goes back to ancient Roman times, and the breed's name roughly translates from the Latin as 'bodyguard-dog.' Click To Tweet

Early socialization and puppy training classes are recommended for all dogs, but for a breed as big and strong as a Cane Corso, they are a must. Many Cane Corsos can be dominant and protective; socialization will help ensure that they grow into well-adjusted, well-mannered adults. Obedience training will keep them from becoming the boss in the household. Cane Corsos are intelligent and eager to please, so they are generally easy to train. Despite their appearance, Cane Corsos are all heart, and respond to love and rewards far better than to harsh corrections or training methods.

The Cane Corso should do well on a high-quality dog food, whether commercially manufactured or home-prepared with your veterinarian’s supervision and approval. Any diet should be appropriate to the dog’s age (puppy, adult, or senior). Some dogs are prone to getting overweight, so watch your dog’s calorie consumption and weight level. Treats can be an important aid in training, but giving too many can cause obesity. Learn about which human foods are safe for dogs, and which are not. Check with your vet if you have any concerns about your dog’s weight or diet. Clean, fresh water should be available at all times.

Want to learn how to train your Cane Corso to be one of the best-trained dogs? Click here to find out how.