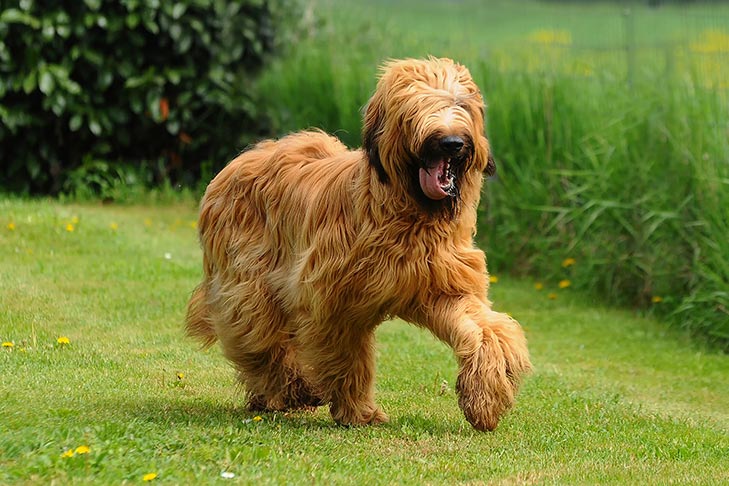 How to Train a Briard

Want to learn how to train your Briard to be one of the best-trained dogs? Click here to find out how.

The Briard packs so much loyalty, love, and spirit into its ample frame that it’s often described as a “heart wrapped in fur.” The dashing good looks of these muscular Frenchmen radiate a distinct aura of Gallic romance and elegance.

Briards are herders known for a wavy coat of either gray, tawny, or black, and an impressive head topped by a peek-a-boo hairdo parted naturally in the middle. A luxurious beard and eyebrows accentuate an expression described as ‘frank and questioning.’ Standing between 22 and 27 inches at the shoulder, Briards are burly and rugged but move with a nimble-footed gait. They possess traits common to many other herders: trainability, brains, a protective eye toward family (especially kids, whom they regard as their flock), and wariness with outsiders. These are large, tireless dogs it is said that just two or three Briards can handle 700 head of sheep, and novice owners might be overwhelmed by their work drive and zest for life.

In the dairy belt of northern France, the Briard, or Chien Berger de Brie as the breed is known in his homeland, has been working pastures since the time of Charlemagne. The breed is named for the dairy-producing region of Brie, best known for the gooey cheese of the same name.

French farmers, known for frugality, developed Briards as two-in-one dogs: They are sheepherders famed for quicksilver agility, and are also tough, courageous flock guardians capable of running off sheep-steeling predators. The Briard is a close relative of the smooth-coated Beauceron, another French pasture breed known for its dual herding and guarding ability. By the 1800s, the Briard was a cherished French institution—even Napoleon, who had an aversion to dogs, was said to be a fan of the breed. The Briard was proudly exhibited at the very first French dog show, at Paris in 1865. By the time of World War I, the Briard was so much a part of the national character that it was named the official war dog of the French army, doing sentry duty, finding wounded soldiers, and pulling supply carts.

Origin stories of Briards in America feature two towering figures in the War of Independence. Thomas Jefferson enters the story in 1789, at the end of his long tenure as America’s ambassador to France. Before he departed for home, the future President acquired a pregnant Briard named Bergère (“pd. for a chienne bergere big with pup, 36 libre,” he wrote in his memorandum book).

Bergère and her pups proved to be magnificent herders and all-around working dogs at Jefferson’s Virginia estate, Monticello. But, as a Monticello historian wrote, “Bergère’s employment was secondary to her role as founder of the American branch of her family.” Indeed, Bergère and her brood, augmented by exports sent from France by Jefferson’s old friend and Revolutionary hero the Marquis de Lafayette, are thought to be the Briard’s foundation in the United States.

In the many years since, Briard owners worldwide have echoed the words Jefferson wrote in praise of these remarkable dogs: “Their extraordinary sagacity renders them extremely valuable, capable of being taught almost any duty that may be required of them, and the most anxious in the performance of that duty, the most watchful and faithful of all servants.”

The Briard is overall a healthy breed, and responsible breeders screen their stock for health conditions such as cancer, hip dysplasia, congenital stationary night blindness, cataracts, corneal dystrophy, retinal folds, hypothyroidism, immune diseases, exocrine pancreatic insufficiency, and kidney disease. Discuss any questions or concerns with your breeder and veterinarian so you can make educated decisions regarding your dog’s health.

Begin grooming your Briard puppy long before he really needs grooming. Make sure that you make grooming time a happy period he will look forward to in the years when grooming is a necessity and can take a long time. A Briard should be brushed several times a week, completely to the skin, using a good-quality pin brush. Using an undercoat rake can help eliminate a lot of dead hair and lessen shedding. The number of baths a Briard will need depends entirely on his lifestyle and the jobs he is doing. Frequency may range from weekly to monthly, to even less.

The Briard requires a job to be happy. Hopefully his job will be one that gives him a lot of exercise, as this is a breed that craves action. Their zest for life makes them great companions for hikers, bicyclers, and joggers. They need a large, securely fenced area where they can run free. Chasing a tennis ball thrown by his owner can help a Briard work off excess energy as well as giving him the human companionship he loves.

Briards are herders known for a wavy coat of either gray, tawny, or black, and an impressive head topped by a peek-a-boo hairdo parted naturally in the middle. Click To Tweet

The Briard was bred to be able to make executive decisions without the aid of a human. Sometimes this can make them a bit difficult to train. They are eager to please, however, and when training methods are positive and the sessions kept lively, energetic, and interesting, the Briard’s natural intelligence will have him at the top of the class. Briards learn quickly and have an excellent memory. They excel at almost any canine role or sport, from catching discs to search-and-rescue, to obedience and agility. Socialization should begin early and continue throughout the Briard’s life.

The Briard should do well on a high-quality dog food, whether commercially manufactured or home-prepared with your veterinarian’s supervision and approval. Any diet should be appropriate to the dog’s age (puppy, adult, or senior). Some dogs are prone to getting overweight, so watch your dog’s calorie consumption and weight level. Treats can be an important aid in training, but giving too many can cause obesity. Learn about which human foods are safe for dogs, and which are not. Check with your vet if you have any concerns about your dog’s weight or diet. Clean, fresh water should be available at all times.

Want to learn how to train your Briard to be one of the best-trained dogs? Click here to find out how.