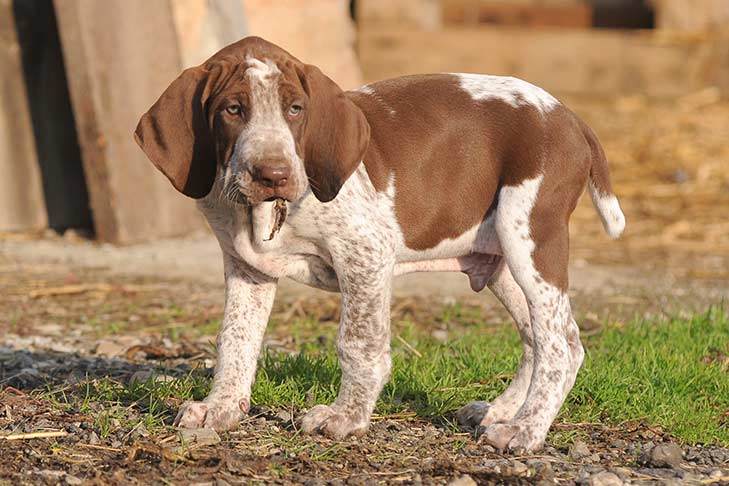 How to Train a Bracco Italiano

The Bracco Italiano is one of the oldest of the pointing breeds. It was introduced into the United States in the 1990s and has remained true to its heritage as a versatile gun dog. It is gentle in the home and tireless in the field.

Tough and adapted to all types of hunting, the Bracco Italiano is reliable, intelligent, docile and easy to train. He has a powerful appearance, with lean limbs, well-developed muscles and a sculpted head. In English, he is the Italian Pointing Dog.

The Bracco Italiano has been called the oldest European pointer, and its history reaches back to the fourth or fifth century BC. While the exact ancestral origins are unknown, it is generally accepted that the Bracco Italiano was first a cross between the Segugio Italiano and the Asiatic Mastiff, which has since become extinct. The breed was developed in northern Italy, with two distinct varieties: the white-and-orange-colored variety known to be from the Piedmont region and the roan-and-brown from Lombardy.

By the medieval period, the breed had become well-established and the Italian aristocracy exported the Bracco across the Old World. The Bracco’s popularity peaked during the Renaissance, and they remained at healthy numbers until the turn of the twentieth century, when they faced a sharp decline.

By the end of the 1800s, the Bracco Italiano faced extinction. Over the years, crossing with hounds and poor breeding resulted in dogs that were too heavily built to perform their work, and the breed suffered from various health problems. Diligent breeding selection and care aided in rebuilding the breed. In the 1920s, it was decided to unify the two variations of the breed in order to preserve genetic diversity.

First, the Piedmontese Pointer was a dog of lighter construction and color, and it originated in the Piedmont region of Italy, as its name suggests. This dog was used for work in the mountains, which its conformation and temperament reflected. The Piedmontese dog was smaller than its counterpart in Lombardy, and its hunting style was reminiscent of some western European pointers in that it traveled with a jaunty gallop. This dog was primarily white, with or without orange markings.

Alternately, the Lombard Pointer was a rich brown roan and had a heavier body type. This dog was used for hunting in the marshy lowlands, and was a trotting breed. These big dogs were bred both for their eye appeal and natural hunting ability.

Shortly after the breed was officially unified, the working standard was written and released, and in 1949 the Societa Amatori Bracco Italiano was founded in Italy. When the Italian conformation standard was published, it incorporated aspects of both breed types, resulting in noted variability within the standard. The breed standard had existed for over a century prior to being compiled into this single document.

The Bracco Italiano was brought to the United Kingdom in the late 1980s, however the United States did not experience the Italian Pointer until approximately 1994. In 2001, the Bracco was accepted into the AKC Foundation Stock Service. In 2005, the first national “Gathering” was held, and the Bracco Italiano Club of America was founded in 2007.

The Bracco is an overall healthy breed, and responsible breeders screen their stock for health conditions such as hip and elbow dysplasia, eye anomalies such as entropion, ectropion, and cataracts, and kidney disorders such as renal amyloidosis. To avoid orthopedic stresses on their fast-growing bodies, Bracco puppies should be fed a balanced food and should not be run on hard surfaces such as on concrete or perform repeated high-impact exercises until at least one year of age. Check the Bracco’s long, pendulous ears for ear infections, and use a veterinarian-recommended ear cleaner once or twice weekly to keep the ear clean and dry to prevent infections.

Bracchi Italiani are easy to groom. Their short coats require minimal care and their long ears require routine cleaning to minimize the risk of ear infections. Beyond that, the occasional bath will keep them clean and looking their best. Their nails should be trimmed regularly with a nail clipper or grinder to avoid overgrowth, splitting and cracking. Teeth should be brushed regularly.

The Bracco is a moderate- to high-energy breed that requires daily exercise and mental stimulation. This can be accomplished by running free in a safe, enclosed space or by scheduled exercises such as daily jogs. At least 30 minutes of exercise per day is needed, but more is preferred. Furthermore, to be happy, they need time each day spent with their family doing organized training or playing.

A Bracco needs a calm, patient trainer who is gentle but firm. This breed may be slightly independent, but for the most part, they are eager to please and are thrilled when they see they’ve made you happy. They are most suited to a home that will use their hunting ability and give them a job to do. However, in lieu of hunting, training for dog sports like agility, obedience and rally can also be a great way to give your dog the physical and mental stimulation he needs.

The Bracco Italiano should do well on a high-quality dog food, whether commercially manufactured or home-prepared with your veterinarian’s supervision and approval. Any diet should be appropriate to the dog’s age (puppy, adult, or senior). Some dogs are prone to getting overweight, so watch your dog’s calorie consumption and weight level. Treats can be an important aid in training, but giving too many can cause obesity. Learn about which human foods are safe for dogs, and which are not. Check with your vet if you have any concerns about your dog’s weight or diet. Clean, fresh water should be available at all times.