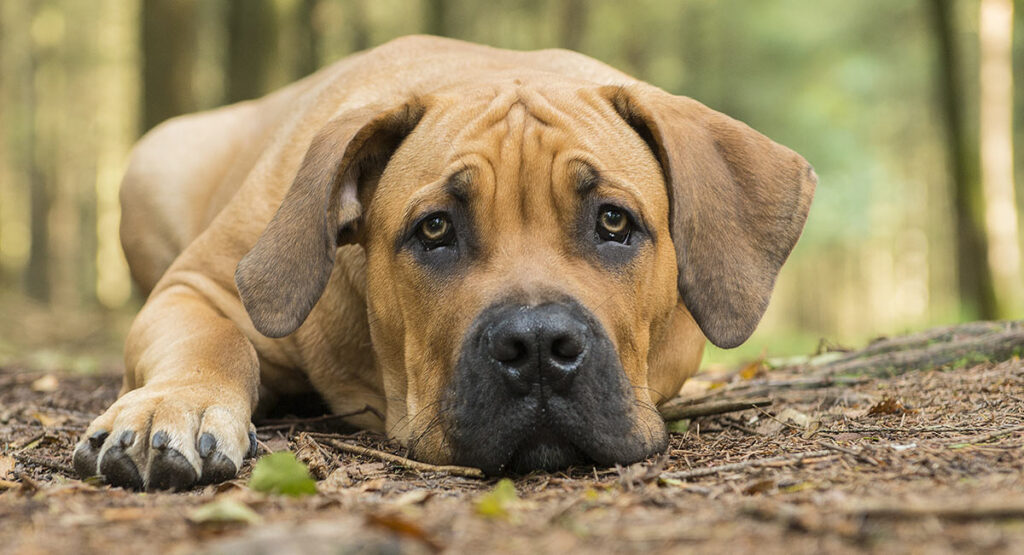 How to Train a Boerboel

Want to learn how to train your Boerboel to be one of the best? Click here for more information

Boerboels are intimidating but discerning guardians of home and family who learned their trade while protecting remote South African homesteads from ferocious predators. They are dominant and confident, also bright and eager to learn. There’s a no-frills, no-nonsense quality to this sleek-coated avenger, who might stand as high as 27 inches at the shoulder and weigh as much as you do. A broad and blocky head, powerful jaws, and thick muscles from neck to rump mark it as a descendant of the ancient ‘molloser’ dog family, the foundation of today’s mastiff-type breeds. In motion, the Boerboel just might be the most agile of all mastiff types.   The imposing Boerboel is devoted to protecting the people and places he loves. Training and socialization should begin early, before a pup becomes a dominant adult. This is a trainable, versatile breed, eager to spend time with their adored humans. Still, a Boerboel might be way too much dog for the novice owner to handle.

“Boer,” a Dutch word meaning “farmer,” was the name given to Dutch, German, and Huguenot settlers of South Africa who began arriving in the mid-1600s. To protect their remote homesteads from predators, they brought along large guarding dogs, bull types and mastiff types among them. The interbreeding of these and other European bloodlines in South Africa resulted in something called the Boer Dog, which was used by Boer settlers as a big-game hunter and protector.

Further refinements eventually gave rise to the Boerboel (“farmer’s dog”), a fearless mastiff who specialized in protection of hearth and home. Their agility and prodigious strength came in handy when running off or tangling with ferocious wildlife, whether lions or packs of marauding baboons.

One should not conclude from this that the Boerboel was a snarly brute constantly spoiling for a fight. Because the breed was created to be primarily a protector of family, Boerboels had to be sensitive and smart enough to tell friend from foe and to take its cues from those they protect. A Boerboel has never been known to back down when provoked, but their default mode is generally a stately watchfulness. Boerboels are be powerful enough to excel at competitive weight-pulling, but they have also had success as docile therapy dogs who have a soft spot in their huge heart for children.

The Boerboel is typically a healthy breed, and a responsible breeder will screen breeding stock for health conditions such as elbow and hip dysplasia, heart disease, and two disorders that affect the eyelids: ectropion and entropion. As with all breeds, a Boerboel’s ears should be checked regularly, and the teeth brushed often.

The Boerboel has a short, dense coat that sheds a moderate amount. Weekly brushing with a soft-bristle brush, a rubber grooming mitt, or a hound glove will help to remove any loose hair and keep the dog looking his best. A good brushing also promotes new hair growth and distributes skin oils throughout the coat to help keep it healthy. Boerboels need a bath only occasionally. As with all breeds, the Boerboel’s nails should be trimmed regularly, as overly long nails can cause the dog pain as well as problems walking and running.

The strong, athletic Boerboel needs daily exercise, such as long walks on a leash or play sessions in a securely fenced area with his owner. Boerboels need mental stimulation and interaction with their owners along with physical activity. They will not take kindly to challenges from other dogs, and visiting dog parks is not recommended. Because of their protective instinct, the Boerboel should never be allowed off leash. The breed often enjoys participating in obedience, rally, weight pull, and agility competitions, as well as protection sports and stock work.