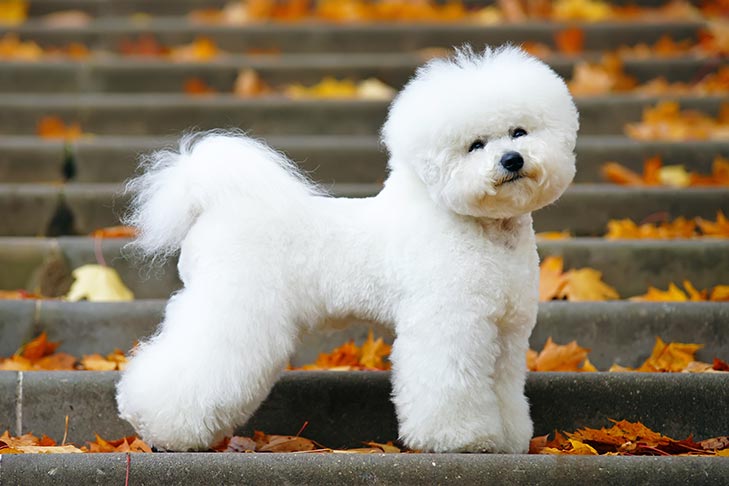 How to Train a Bichon Frise

Want to learn how to train your Bichon Frise to be one of the best-trained dogs? Click here to find out how.

The small but sturdy and resilient Bichon Frise stands among the world’s great ‘personality dogs.’ Since antiquity, these irresistible canine comedians have relied on charm, beauty, and intelligence to weather history’s ups and downs.

A good-size Bichon will stand a shade under a foot tall at the shoulder. The breed’s glory is a white hypoallergenic coat, plush and velvety to the touch, featuring rounded head hair that sets off the large, dark eyes and black leathers of the nose and lips. Bichons are adaptable companions who get on well with other dogs and children. Alert and curious, Bichons make nice little watchdogs but they are lovers, not fighters, and operate under the assumption that there are no strangers, just friends they haven’t met yet. Their confidence and size make them ideal city dogs. Bichons train nicely and enjoy performing for their loved ones. Finally, there’s the happy-go-lucky Bichon personality that draws smiles and hugs wherever they go.

Bichons are a member of the clan of little white dogs formally known as Barbichon types. (These also include the Bolognese, Havanese, and Maltese.) It is thought that these ancient breeds began their modern development on Tenerife, the largest of the Canary Islands. One of these breeds became so popular with the island’s sailors that it was known as the Bichon Tenerife, the primary ancestor of today’s Bichon Frise.

The breed’s close association with European nobles began sometime in the 13th century. Most notably, they endeared themselves to the royal courts of Spain, Italy, and France, and came into their own during the Renaissance.

With the advent of the French Revolution in 1789, the Bichon’s days as the pampered and perfumed lapdog of aristocrats came to a rude end. One by one the breed’s benefactors were trotted off to prison and the guillotine, and their Bichons lost their positions of privilege. Many were turned out into the street to fend for themselves. Street entertainers took in the bright, agile dogs and trained them to coax a coin or two from passersby with their antics. Soon, the Bichon was earning his keep as a circus performer. Trainable, impossibly cute, and always at their best when in the spotlight, Bichons were excellent candidates for showbiz success.

In the 20th century, Bichons again faced hard times because of the shortages and austerities brought on by the two world wars. And again, many Bichons found themselves out in the cold. Thanks to a few fanciers who gathered Bichons off the streets of France and Belgium, the breed survived and was recognized in France under the auspices of the Societé Centrale Canine in1933 as the Bichon a Poil Frisé—the “Bichon of the curly hair.”

The Bichon Frise Club of America was founded in San Diego in 1964. The AKC accepted the Bichon into the Miscellaneous class in 1971, and full breed recognition in the Non-Sporting Group came a year later.

Bichons are generally healthy dogs, and a responsible breeder will screen breeding stock for health conditions such as allergies, bladder infections, luxating patella, and cataracts and other eye diseases. Bichons may experience early tooth loss or complications from gum infection if dental care and regular tooth brushing are not a priority. To avoid ear infections, regular ear cleaning is recommended.

Bichons should be brushed at least two or three times a week, but every day is best. They need a bath and a clipping at least once a month. Owners who show their Bichons learn to do this, but most pet owners take their Bichon to the groomer every four to six weeks. The Bichon is considered to be relatively hypoallergenic, as the breed sheds very little because the shed hair is caught up in the undercoat. That shed hair has to be brushed out to prevent mats from forming. As with all breeds, the Bichon’s nails should be trimmed regularly as well.

The Bichon is classified as ‘somewhat active,’ but that’s an average. Long stretches of calm are interspersed with brief bursts of high activity, often just running through the house or around the yard. Daily play sessions, in addition to walks, are required. Another dog can be a fine exercise companion, but the Bichon will still need quality playtime with his owner. A fenced-in backyard is a good idea; Bichons are surprisingly fast, and if one makes a dash for freedom, he may be difficult to catch or to call back to you. Many Bichons enjoy participating in obedience, agility, and rally competitions.

The small but sturdy and resilient Bichon Frise stands among the world's great 'personality dogs.' Since antiquity, these irresistible canine comedians have relied on charm, beauty, and intelligence to weather history's ups and… Click To Tweet

As with all breeds, early socialization and puppy training classes are recommended. Bichons have a reputation for being difficult to housebreak. In every other respect, however, they are very easy to train. For example, Bichons love to perform tricks and learn new ones quickly. They respond very well to training based on positive rewards, rather than harsh or negative methods. A Bichon needs to be with his family, and undesirable behaviors are likely to result if he is regularly left alone for long periods of time.

The Bichon Frise should do well on a high-quality dog food, whether commercially manufactured or home-prepared with your veterinarian’s supervision and approval. Any diet should be appropriate to the dog’s age (puppy, adult, or senior). Some dogs are prone to getting overweight, so watch your dog’s calorie consumption and weight level. Treats can be an important aid in training, but giving too many can cause obesity. Learn about which human foods are safe for dogs, and which are not. Check with your vet if you have any concerns about your dog’s weight or diet. Clean, fresh water should be available at all times.

Want to learn how to train your Bichon Frise to be one of the best-trained dogs? Click here to find out how.