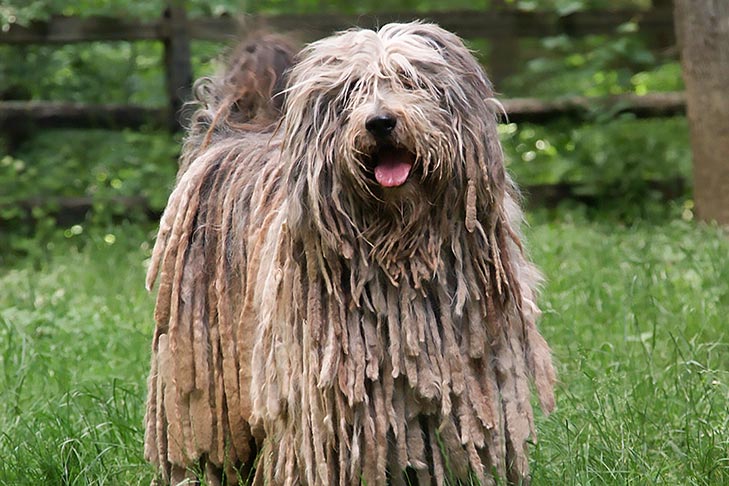 How to Train a Bergamasco Sheepdog

Want to learn how to train your Bergamasco Sheepdog to be one of the best trained dogs? Click here to find out how

Generally happy with kids and other animals, the low-maintenance and robustly healthy Bergamasco is much more than a show-stopping hairdo. Eager to please, smart, and stubbornly devoted to work, Bergamascos are patient but protective.

Beneath the one-of-a-kind coat is a large, muscular shepherd dog of ancient pedigree. But, since the coat is the breed’s hallmark, let’s take a close look. The Bergamasco Sheepdog has hair of three different textures that form naturally occurring loose mats, or ‘flocks’ (strands of hair woven together, creating flat layers of felted hair), covering the body and legs. The flocks provide protection from the fierce cold and wild predators of the Italian Alps, the breed’s ancestral homeland. Bergamascos are bright, loyal, loving, and trainable with a dash of mountain-dog independence. They take to watching over loved ones with a serene vigilance. Wary of strangers until properly introduced, Bergamascos are aggressive only as a last resort.

Bergamasco Sheepdogs (Italian plural: Bergamaschi) have been associated with the Alpine town of Bergamo, near Milan, for many centuries. They are among several Middle-Eastern breeds that were bartered around the Mediterranean basin in the distant past by the Phoenicians, wily seafaring traders of the pre-Roman ancient world.

French authorities have theorized that the Bergamasco is descended from the Briard, an ancient Gallic herder. Patriotic Italians, however, insist that the Bergamasco came first and contributed to the genetic makeup of the Briard and other European flock-dog breeds. They make the sound argument that if the breed was originally Middle-Eastern, it must have arrived in Italy before it was established as far west as France.

The powerful, balanced, and resilient Bergamasco is ideally suited to move and guard sheep on the rocky slopes of the Italian Alps. “It would not be exaggerating to describe this breed as the shaggiest dog in the world,” says one expert. The profuse and distinctive flocks that cover the dog protect him from the bitter cold of high altitudes, and they serve as armor when doing battle with sharp-toothed, razor-clawed predators looking to feast on a stray sheep. (It should be noted that though the Bergamasco bears a passing resemblance to its Hungarian cousin, the corded Komondor, the coats are distinctly different. The Bergamasco’s flocks are flat, whereas the Kom’s cords are round, like rope.)

The Bergamasco’s numbers dwindled in Italy during the years after World War II, but more recently dog people around the world have rallied behind this serene but fearless protector. The breed’s American devotees scored a triumph in 2015, when the Bergamasco Sheepdog was admitted to the AKC Stud Book.

Bergamascos are generally a healthy breed. Like all breeds there may be some health issues. Some dogs may be faced with these health challenges in their lives, but the majority of Bergamascos are healthy dogs.

The coat of an adult Bergamasco is basically maintenance-free. It’s made up of three types of hair, called ‘dog’, ‘goat’, and ‘wool’. Goat and wool hairs don’t start to appear until the dog is a year old. When they do, the coat must be ripped into mats a process that can take a few hours or a few evenings. But once it’s done, it’s done. A Bergamasco doesn’t shed, doesn’t need to be brushed, and doesn’t need to be bathed more than two or three times a year. Because the coat aids in thermoregulation, a Bergamasco should never be shaved down. As with all breeds, the Bergamasco’s nails should be trimmed regularly.

Want to learn how to train your Bergamasco Sheepdog to be one of the best trained dogs? Click here to find out how