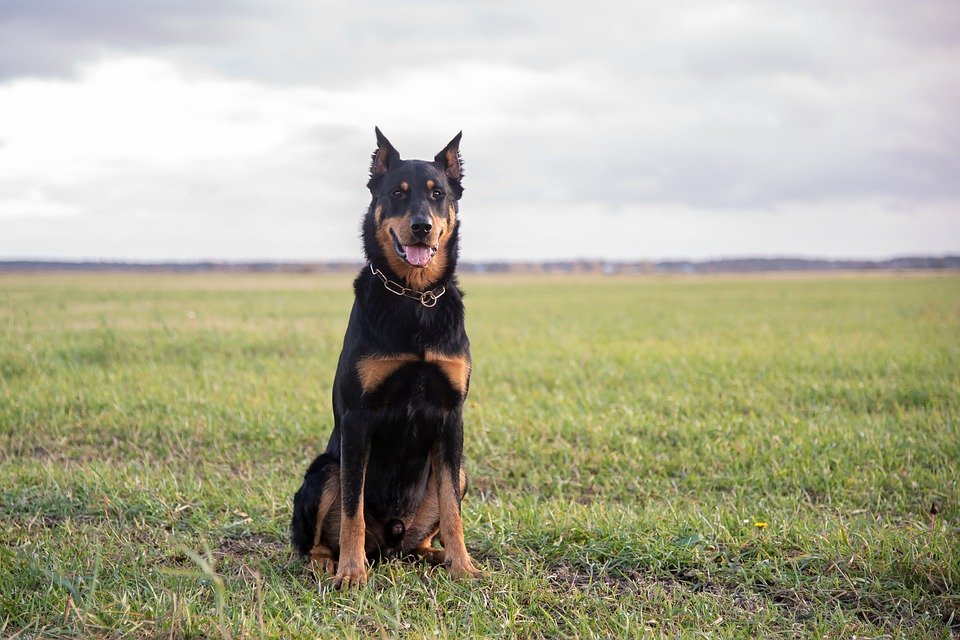 How to Train a Beauceron

Want to learn how to train your Beauceron to be one of the best-trained dogs? Click here to find out how.

The Beauceron is imposing and powerful, but also remarkably smart, spirited, and a versatile herder imagine a Border Collie’s brain in a 100-pound body. They are especially beloved by women as a dashing but sensitive companion and protector.

Beaucerons are muscular, rugged, and large, standing as high as 27.5 inches at the shoulder, and yet graceful and in all ways balanced. Their dark black coats feature handsome squirrel-red accents, including the red feet that give the breed its French nickname Bas-Rouge (‘red stockings’). They’re also seen in a black-gray-tan coat. The long head is well chiseled, and the dark brown eyes project expression breed fanciers describe as frank and confident. They’re not for novice owners, who might end up being owned by their dominant dog instead of the other way around. That said, well-trained and socialized Beaucerons are levelheaded watchdogs and guardians, especially good with the young, the small, and the defenseless.

The Beauceron, also known as the Berger de Beauce or the Bas Rouge, is a French shepherd dog whose name is derived from the vast agricultural region southwest of Paris.

Since its development in the late Middle Ages, the Beauceron has played many roles: soldier, bodyguard, rescuer, competitor, companion, prankster, and peerless mover of livestock. Along the way, the breed has won hearts on both sides of the Atlantic, as much for its endearing personality as for its multifaceted working ability.

Beauceron and Briard are names of two groups of French shepherd dogs identified in the 19th century. A dog show held at the 1863 Universal Exposition in Paris featured dogs recognizable as Beaucerons: upright ears, black with rust markings, and a wolflike build. Unlike the modern type, they had a narrower muzzle and a rougher coat.

Leading authorities convened in 1896 to classify the French shepherd dogs. The name Beauceron was given to the shorter-coated dogs; the longer-haired one was called the Briard. In 1922, the French breed club, the Club des Amis Du Beauceron, was founded.

The Beauceron is a dog of great power but of great sensitivity too. It’s an upright breed who works wide of the herd or flock, unlike such herders as the Australian Shepherd, who works up close to his charges. The Beauceron approach to herding is quiet and calm; they can work into sheep without spooking them. This versatile and whip-smart breed also has a history of military and police K-9 work. They were especially useful in the trench warfare of World War I. The British War Museum houses a photo of a Beauceron leaping over a trench— a French dog used by Germans to penetrate the British line.

Along the way, the Beauceron was discovered by the dog-loving French public, among them Sidonie-Gabrielle Colette (1873–1954), known to generations of adoring readers the world over as simply Colette. She wrote that her Beauceron was “one of those rare companions who remain silent at the right time, respect our work and our sleep, howl for our own tears, and close their eyes with a bitter discretion in the face of anything—the kiss of a lover, the tender hug of a child—that deprives them of our fickle human friendship.”

Any large or deep-chested dog may be susceptible to bloat, a sudden and life-threatening stomach condition. Beauceron owners should educate themselves on what symptoms to look for and what to do should it occur. Responsible breeders will screen their breeding stock health conditions such as hip dysplasia, heart disease, eye problems, and allergies. As with all breeds, a Beauceron’s ears should be checked regularly, and the teeth should be brushed often.

The Beauceron has a short, dense double coat; the soft undercoat is covered by a rough, waterproof outer coat. It doesn’t require a lot of grooming, but it does shed. A lot. And even more so twice a year during shedding season. Weekly brushing daily during shedding season with a medium-bristle brush, a rubber grooming mitt or tool, or a hound glove will remove the dead hair before it can fall onto the furniture, and it promotes new hair growth as well. As with all breeds, the Beauceron’s nails should be trimmed regularly, because overly long nails can cause the dog pain as well as problems walking and running. Don’t forget to trim the double dewclaws on the rear legs

The Beauceron is a powerful, athletic, and intelligent breed that needs lots of physical and mental challenges. This is not a breed for novice owners. They need a variety of outdoor locations and types of exercise each day and are best suited to an experienced, active owner who can provide the mental and physical activity they need. Although the Beauceron was not bred to gather sheep as other shepherd breeds were, he can be trained to perform in herding events, as well as Schutzhund (protection work) and agility trials and activities such as carting, mushing, and skijoring (pulling a person who is on skis).

The Beauceron, also known as the Berger de Beauce or the Bas Rouge, is a French shepherd dog whose name is derived from the vast agricultural region southwest of Paris. Click To Tweet

Socialization and obedience training are a must for this breed. Beaucerons are highly intelligent, loyal, and strongly devoted to their owners, which makes training them fairly easy. They do not respond well to harsh training methods, particularly physical correction. Firm, fair, consistent training and handling are usually quite successful. They are known for exuberant behaviors such as jumping on people and grabbing people and things with their mouths; these behaviors will often be the focus of early training sessions.

The Beauceron should do well on a high-quality dog food, whether commercially manufactured or home-prepared with your veterinarian’s supervision and approval. Any diet should be appropriate to the dog’s age (puppy, adult, or senior). A working Beauceron can have high nutritional demands, so remember to assess your dog’s condition regularly to be sure his diet is meeting his needs. Conversely, some dogs are prone to getting overweight, so watch your dog’s calorie consumption and weight level. Treats can be an important aid in training, but giving too many can cause obesity. Learn about which human foods are safe for dogs, and which are not. Check with your vet if you have any concerns about your dog’s weight or diet. Clean, fresh water should be available at all times.

Want to learn how to train your Beauceron to be one of the best-trained dogs? Click here to find out how