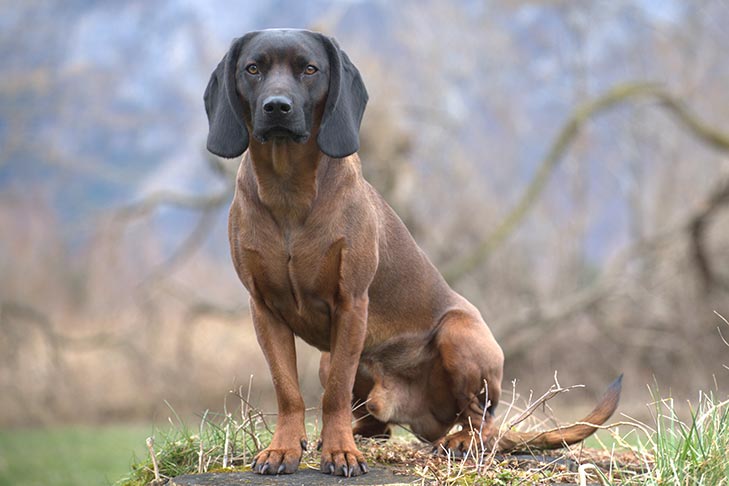 How to Train a Bavarian Mountain Scent Hound 

The Bavarian Mountain Scent Hound is calm and balanced, devoted to its owner, and reserved with strangers. He is a sound, self-assured, unafraid, biddable dog, neither shy nor aggressive.

Hailing from Germany, the Bavarian Mountain Scent Hound is the Bayerischer Gebirgsschweisshund in its native German. The breed’s most notable trait is its outstanding “cold nose” tracking ability. His nose is so acute, he can distinguish between the injured game he is hunting and other animals of the same species. This somewhat lightweight, active, medium-sized breed is devoted to his owner, but can be reserved with strangers. He is not a kennel dog and prefers to be around his human family.

The German Bracken were the original hunting dogs, having “the finest nose” and a strongly developed will to follow scents and trails, but only the most reliable and perseverant Bracken were put on leash to find the lost trail of hunted game. From these particular Bracken, all Liam Hounds (Leithunde) and Leashhounds (Schweisshunde) were bred, including the Bayerischer Gebirgsschweisshund (Bavarian Mountain Scent Hound).

These dogs are the quintessential hunting companion for professional hunters and gamekeepers. Though still rare, there is growing interest in this breed, with clubs in multiple countries including Great Britain and the United States, as well as Germany.

Bavarians are a generally very healthy breed. Responsible breeders screen their stock for health concerns such as hip dysplasia and epilepsy. Good breeders utilize genetic testing of their breeding stock to reduce the likelihood of disease in their puppies

The Bavarian requires regular brushing. His coat is dense, close fitting and harsh, with little gloss, and is finer on the head and ears, and harsher and longer on the belly, legs and tail. The breed’s strong, fast-growing nails should be trimmed regularly with a nail clipper or grinder to avoid overgrowth, splitting and cracking. Their ears should be checked regularly to avoid a buildup of wax and debris, which can result in infection. Teeth should be brushed regularly.

Bavarian Mountain Scent Hounds are not suited for city life. They are in regular need of space and exercise. They are also not dogs for the casual hunter. Most are owned and used by foresters and game wardens. If not placed in a working home, the Bavarian will need an abundant amount of physical and mental stimulation to satisfy his high hunting instinct. He is not a kennel dog, but can be trained to sleep and eat there. Space to run and play in an area with a high fence is important, as they have been known to climb fences and dig holes when bored.

Bavarians are social, intelligent dogs, and, much like other breeds, if not kept mentally stimulated they will become bored, unhappy and destructive. Continued proper training, conditioning and patience are required. During training, they do best with positive reinforcement, never punishment.

The Bavarian Mountain Scent Hound should do well on a high-quality dog food, whether commercially manufactured or home-prepared with your veterinarian’s supervision and approval. Any diet should be appropriate to the dog’s age (puppy, adult, or senior). Some dogs are prone to getting overweight, so watch your dog’s calorie consumption and weight level. Treats can be an important aid in training, but giving too many can cause obesity. Learn about which human foods are safe for dogs, and which are not. Check with your vet if you have any concerns about your dog’s weight or diet. Clean, fresh water should be available at all times.