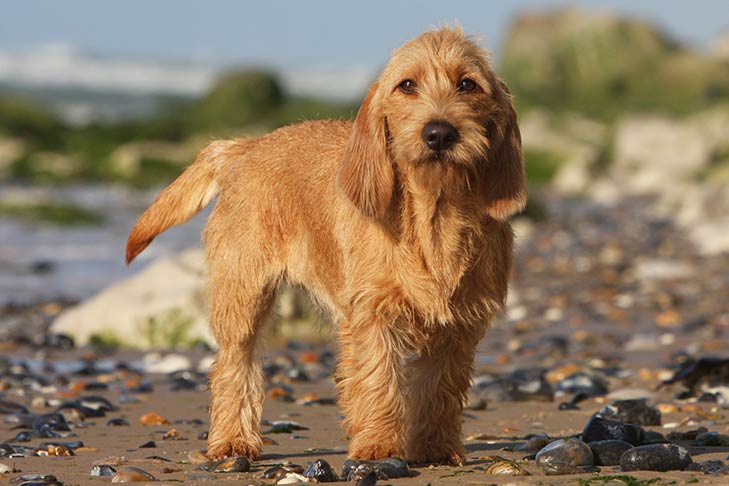 How to Train a Basset Fauve de Bretagne

Smart, courageous and determined, the Basset Fauve de Bretagne is a serious hunter, easily adaptable to different types of game and terrain. It is equally an excellent companion dog, being cheerful, intelligent and eager to please.

The Basset Fauve de Bretagne, also known as the Fawn Colored Brittany Basset, is a small, stocky, rough-coated hardy dog that is energetic and fast for its size. The Fauve gets along well with children and other pets. Training and socialization is a must or Fauves can get into mischief. Not nuisance barkers, you will, however, know if a rabbit runs through the yard, as they then give the hound ‘voice’ and chase. This breed is as happy romping in the field as he is curled up next to the family on the sofa.

The Basset Fauve de Bretagne is truly an old French hound, tracing back to the 1500s when Francois I had a pack of Breton hounds he hunted regularly. These dogs were Grand Fauve de Bretagnes, which sadly became extinct, but their DNA continues to run in the lines of the modern rough-coated Griffons and Bassets such as the Basset Fauve. The Grand Fauve de Bretagnes (Fawn Hound of Brittany) were larger (27.5-29.5 inches) and were introduced to the French court around 1520 by Admiral d’Anneboulde. In the pack owned by Francois I, there was a stud dog named Mirraud, who was used extensively by royalty.

Up until the French Revolution, only the aristocracy were allowed to keep hounds and hunt with them via horseback. In 1789, aristocratic privileges were abolished, allowing anyone to own and hunt a hound. Most peasants, however, did not own a horse, necessitating a shorter-legged, closer-ranging hunting companion. Thus, the Basset was developed. How the Basset breed was formed is a matter up for debate, but most likely smallest bred to smallest over an extended period of time.

By the 19th century, hound packs were made up exclusively of Bassets to hunt rabbits, hare, fox, roe deer and wild boar. Though it was rumored that both the Grands and Bassets nearly became extinct during WWII, it was confirmed by leading French Fauve Expert Mme. F Corbeau of the French Club du Fauve de Bretagne that the breed remained strong in popularity by French huntsmen.

The breed still remains a popular, versatile hunting hound and family dog in France, is gaining popularity in the United States and has breed clubs in numerous countries.

The Basset Fauve de Bretagne is a relatively healthy dog, and responsible breeders screen their stock for health concerns such as progressive retinal atrophy (PRA), epilepsy, cardiomyopathies, skin allergies and age-related thyroid issues. A gene test for primary open angle glaucoma is now available, meaning breeders are able to identify carriers and avoid producing this eye anomaly. The vast majority of Fauves are very healthy and enjoy longevity, with many living to be 16 plus years old. Working with a responsible breeder can help those wishing to own a Fauve to gain the knowledge they need about specific health concerns within the breed. Good breeders utilize genetic testing of their breeding dogs to reduce the likelihood of problems with their puppies.

The Basset Fauve de Betagne is almost a wash-and-wear dog, with a coarse, wiry coat that repels dirt and resists matting. Some dogs have more coat than others. Longhaired dogs can be hand-stripped. All require grooming weekly with a fine-toothed comb, followed by a stiff brush. Shedding is seasonal. Nails should be trimmed regularly to avoid overgrowth and splitting. Teeth should be brushed and ears checked regularly.

Basset Fauves are energetic and love to play. Regular walks need to be on a leash as they can run off and follow their nose at a moment’s notice. Areas for exercise and play, such as a backyard, should be fenced for the same reasons. Exercise can also come in the form of indoor activities, like hide-and-seek, chasing a ball rolled along the floor, or teaching them new tricks. Training for dog sports like agility, obedience and rally can also be a great way to give your dog exercise.

The Basset Fauve de Bretagne is a small scent hound, bred originally to find rabbits. The nose goes to the ground and can overpower the brain if the dog is not trained from an early age to tune into his human. Because of this breed’s intelligence, mental stimulation is as important as physical exercise.

The Basset Fauve de Bretagne should do well on a high-quality dog food, whether commercially manufactured or home-prepared with your veterinarian’s supervision and approval. Any diet should be appropriate to the dog’s age (puppy, adult, or senior). Some dogs are prone to getting overweight, so watch your dog’s calorie consumption and weight level. Treats can be an important aid in training, but giving too many can cause obesity. Learn about which human foods are safe for dogs, and which are not. Check with your vet if you have any concerns about your dog’s weight or diet. Clean, fresh water should be available at all times.