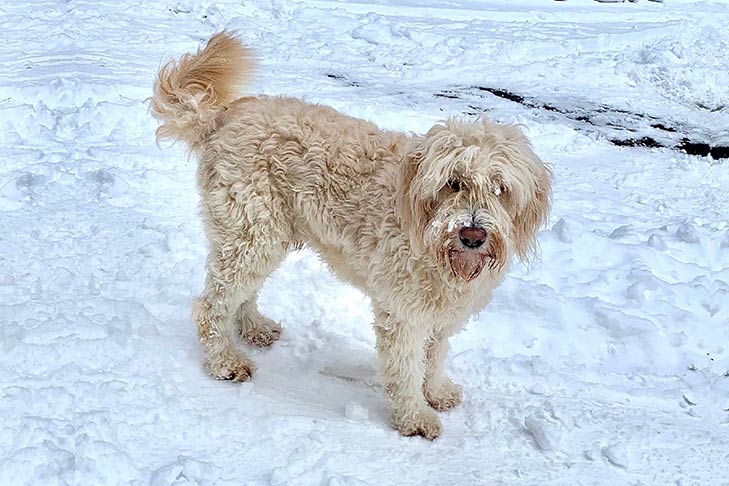 How to Train a Barbado da Terceira  

The Barbado da Terceira is a medium-sized herder that is a great companion and family dog. The breed is intelligent, easy to train, docile and willful, joyful, and sensitive. BDTs are athletic and need an experienced and loving owner.

The medium-sized Barbado da Terceira (BDT) was brought to the Portuguese island of Terceira, one of the archipelagos making up the Azore islands, by settlers in the 1500s to herd wild cattle and to guard livestock. The Azores are autonomous islands in the mid-Atlantic.

There are several hypotheses regarding the origins of the breed, but the most likely is that the Barbado comes from medium-sized long-haired herding and/or cattle dogs that exist throughout Europe. The breed may have come from a similar stock of dogs that gave rise to the similar, but morphologically distinct, Azorean Cattle Dog, given the history of the settlement of the Azores islands by the Portuguese, the Spanish, the French, the Belgians, the Flemish, the English, the Dutch, et. at.

Under the direction of Carla Molinari, president of the Clube Português de Canicultura (CPS), the official Portuguese Kennel Club, a protocol of action for the recognition of the “Barbado da Terceira” was signed in April, 2004, by the CPC, the Direcção Regional do Desenvolvimento Agrário (Regional Direction of Agricultural Development) and the University of the Azores. The first provisional standard of the Barbado da Terceira was presented to the CPC General Assembly members in 2005.

The breed was brought to the mainland of Portugal only at the end of the 20th century. The popularity of the Barbado as a pet, herder, and show dog is growing in Portugal and abroad and is facilitated by the CPC, the Associação Açoreana dos Criadores dos Cães Barbados da Ilha Terceira (The Azorean Association of Barbados Dog Breeders of Terceira Island), and the Clube Português do Barbado da Terceira (CPBT).

The Barbado da Terceira has a propensity for Hip Dysplasia.

The Barbado da Terceira should be bathed only on an ¿as-needed¿ basis.  If brushed well, they will not need to be bathed often as bathing strips the dog of valuable skin oils.  A bath every two months should therefore be adequate. Puppy hair needs to be brushed regularly. One must especially watch for tangles between the toes and clipped if found. Hair that grows too long over the eyes should also be trimmed. When the adult coat starts to grow, and the puppy hair falls out, loose hairs often get stuck in the new coat and can cause tangles, especially in the neck. These are difficult to remove, especially if the real coat   gets  longer. Hair should be brushed well down to the skin, working from the legs upwards. If this is too difficult, they should be shaved  to 1-1 ½   inches (7F clipper). Because the Barbado does not shed, hair should be trimmed when it gets too long. Trimming summer is not needed as the undercoat takes care of the heat. They need to be brushed at least weekly to ensure that hair is not matted and that twigs and burrs are removed. Their nails should be checked every few weeks and trimmed as needed. Many have back dew claws that need to be trimmed. Removal is not recommended. Ears should be checked once a week and cleaned as needed. Hair inside the ear may be removed with ear powder but should not be cut. Their teeth should be brushed regularly.

Daily exercise is crucial. These dogs are so smart that they must be mentally, as well as physically, stimulated. They do not need a fenced-in yard, preferring to stay close to home and to their people. They are territorial of their home and yard so they must be supervised if neighborhood dogs live nearby. Barbados da Terceira’s are happiest when they have a cow to herd, but if these are not available, a ball will do.  They will willingly walk, hike, or jog with their human. Agility courses and herding courses, if available, are also great substitutes for those not living on a farm. Owners whose flowers are eaten by deer will be in awe of the agility with which the Barbado da Terceira herds them – away – from their homes. Barbado da Terceira’s will be giddy and vocal when playing with each other.  Other breeds may be initially confused by the BTDs earnest play, but they quickly become accustomed to it.

Due to the Barbado da Terceira¿s beauty, intelligence, and joyful nature, they are increasingly popular family pets on the mainland of Portugal,  throughout Europe, and in the U.S.A.; however, they need to be physically and mentally active to be successful pets. They are good with children, but should be supervised. They are also good with other dogs, but must be supervised if with an unfamiliar dog. Dominant Barbado da Terceiras may fight other dogs so early socialization with many dogs is key.

The  Barbado da Terceira is recommended for those with some or much-experienced dog owners. Positive reinforcement should be used.  When this is not enough, they may have to have a time out to become calm again. The  Barbado da Terceira is a sensitive dog that is quite willing to please and harsh punishment may result in the opposite of what is intended.  If treated harshly, the Barbado da Terceira may become anxious or frightened, which can lead to long-term behavioral issues such as aggression. New owners who consider sending their puppies to overnight training centers must recognize the potential long-term consequences of such training. While the training might correct unwanted behaviors in the short term, there is no guarantee that the puppy will not be traumatized, leading to more undesirable behaviors in the long term.  This is true even of training centers that come with the best recommendations and that promise that they will only use positive reinforcement. Puppies are not one-size-fits-all and your trainer will not be familiar with the needs of your  Barbado da Terceira puppy, regardless of his/her assertions of familiarity with all dogs. The new puppy must bond with its owners; sending him/her away will lead to depression and feelings of abandonment and will most likely break bonds that have already been formed.  There is no replacement for firm, consistent, but loving training by their human begins in the first moment that a new puppy is brought home.

Puppies must be fed puppy food until maturity, at around twelve months.  Rustic breeds need premium food, but super premium is not required. They can be given chondroitin, glucosamine and calcium supplements for balanced growth. They should be fed three times per day until four months old, and two times a day after this. Barbado da Terceira’s are not prone to being overweight, so free feeding is also fine if preferred.