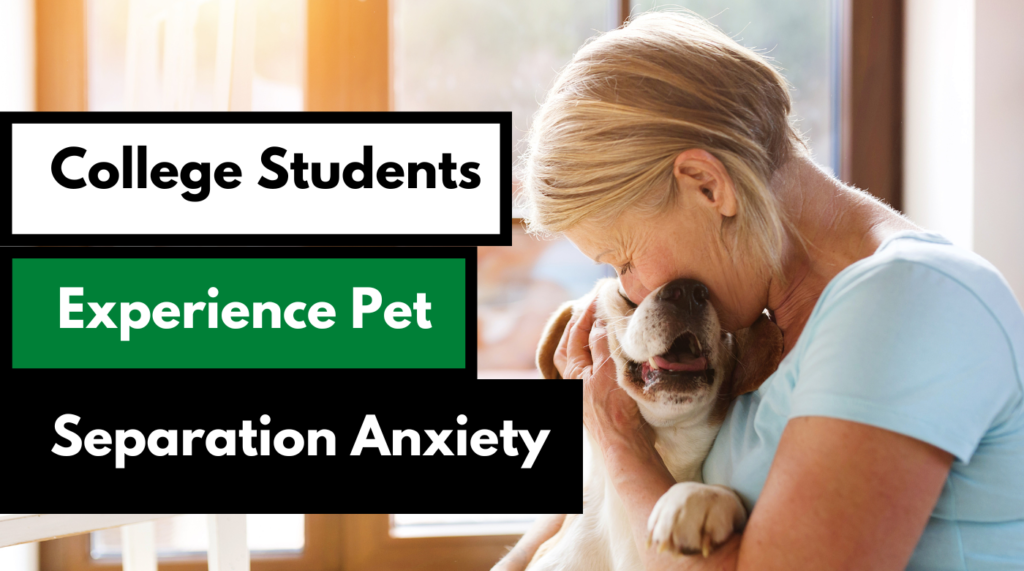 Pets are not the only ones who experience separation anxiety; their people do too.

A survey of a sample of new first-year college students leaving pets at home and found that 75% experienced some level of pet separation anxiety — with one in four reporting moderate to severe symptoms. The students who had higher anxiety tended to be those who treated their pets more like people, identifying them as friends, sleeping in the same room and generally spending a lot of time with them. Students who had dogs at home also tended to report more attachment to their pets — and more separation anxiety — than those with cats and other types of pets.

Hello and welcome to Dog Works Radio. I am your host Michele Forto, and I am also the lead trainer of Alaska Dog Works. Here we help you have a better relationship with your K9 Buddy. Did you know that my husband, Robert, and I are mid-life college students. Yep, Robert is earning his doctorate and I am earning a masters. Thankfully we have the privileges of taking our classes online but did you know that some college students experience separation anxiety from their pets when they head off to school? That is what we are talking about on today’s podcast.

Washington State University researchers surveyed a sample of new first-year college students leaving pets at home and found that 75% experienced some level of pet separation anxiety — with one in four reporting moderate to severe symptoms.

“Students who are struggling with missing their pets should know that they’re not alone,” said Alexa Carr, the lead author of the study which is part of her WSU doctoral dissertation. “There’s nothing necessarily wrong with them if they are experiencing a lot of distress from leaving their pets. It can be an isolating experience to lose that coping resource.”

The students who had higher anxiety tended to be those who treated their pets more like people, identifying them as friends, sleeping in the same room and generally spending a lot of time with them. Interestingly, students who had dogs at home also tended to report more attachment to their pets — and more separation anxiety — than those with cats and other types of pets.

While there are many anecdotal accounts of students missing their pets, the study published in Anthrozoos, is the first known research investigating this kind of pet separation anxiety in humans.

Carr and co-author Patricia Pendry, a WSU associate professor of human development, surveyed a sample of about 150 incoming first-year students who had pets at home. Many respondents, 81%, were women — which is a limitation of the study but also consistent with trends in college enrollment. In 2020, 60% of enrolled college students were women, according to National Center for Education Statistics.

The researchers surveyed the group before they arrived on campus and after their first two weeks of the semester in fall 2019 before the pandemic forced many universities online. The students answered questions related to their mental health, attachment to their pets and feelings about leaving them behind.

Even after controlling for pre-existing mental health issues, the researchers found that pet-related separation anxiety was very strong in the group during the transition to college, especially among students who were closely attached to their pets.

The findings indicate this is an issue for many students and should be taken seriously by campus counselors, Carr said. It also has implications for pet visitation programs now popular at many U.S. universities which bring animals to campus to help stressed students. A previous WSU study found that petting dogs or cats for just 10 minutes lowers levels of the stress hormone cortisol.

The authors said more research is needed to understand the implications of pet separation anxiety. For example, whether students’ symptoms are stable or become less severe over the course of the semester; or whether pet visitation programs might have some unintended effects, such as potentially exacerbating separation anxiety for students missing their specific pets back home.

The researchers also cautioned that this study should not be used as justification for students to bring their pets with them when they go to college, particularly if they would be their sole caregivers.

“It’s a big responsibility to take care of an animal, and would a student then able to balance their school responsibilities, social lives and jobs?” Carr said. “There are more things to take into consideration and explore before we could advocate for more pets on campus.”

So, what do you think? Dd you or someone you know experience separation anxiety when they went off to college? Let us know in the comments section or on our socials. Just search First Paw Media.

Oh, and one last thing, did you know the best thing you can do for our show is to tell your family and friends how to listen? Who knows, they might just become a rabid listener just like you.

I am Michele Forto for Dog Works Radio and First Paw Media. See you next time.