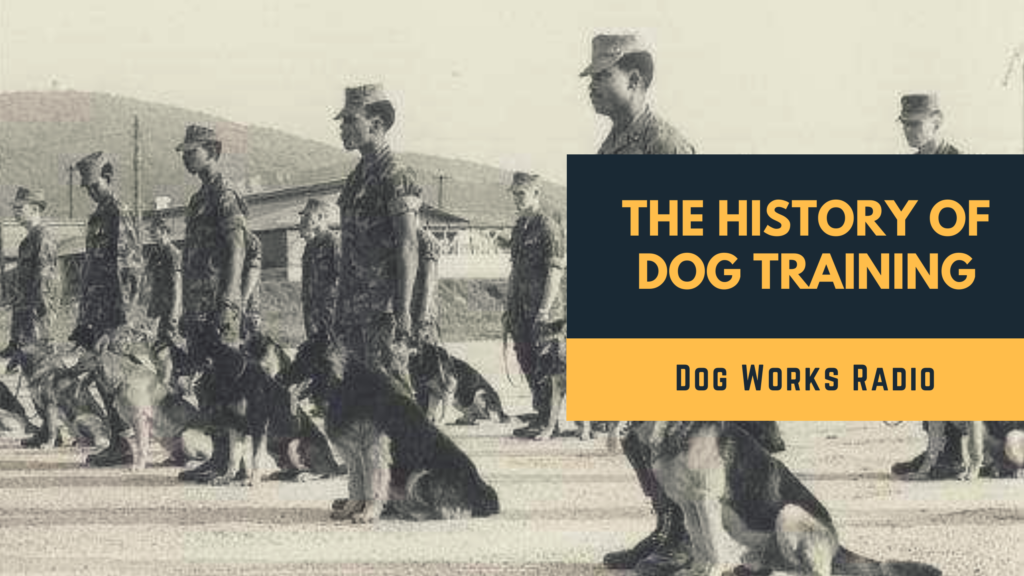 A brief history of dog training

A Brief History of Dog Training

Today we are going to talk about a brief history of dog training from the perspective of a balanced approach. Dog training has come a long way in the past few decades. It wasn’t so long ago that trainers used punishment, intimidation and cruel equipment to train dogs, and sadly, some trainers still use these methods and tools today. But an ever-increasing number of trainers are turning to gentle, positive, reward-based training techniques. This podcast (article) will look at the evolution of dog training, and how we’ve become more enlightened when it comes to teaching our canine companions.

Prefer to listen? Check out the History of Dog Works Radio podcast below and subscribe for free on Apple Podcasts

I am Michele Forto and I am the lead trainer at Alaska Dog Works. We offer a balanced approach to dog training that is built on the fundamental principles that took almost a century to develop. We are not fad trainers and we don’t subscribe to every technique that is available today in the world of dog training. We train dogs in a way that works and is built on scientific principles that work. Today we are going to give you a brief history of dog training.

From cruelty to kindness our approach to dog training has become much more enlightened. When I started dog training professionally more than a decade, I learned most of my skills from my husband Robert who got most of his experience in the early 1990s by going to one of the first fully immersive programs at the time, National Canine. Over the years we learned the latest techniques from not only the best in the industry but also spending a heck of a lot of time just sitting and observing canine behavior and training hundreds if not thousands of dogs. We feel we are in a unique position than many other trainers in our area because we literally live with a pack of sled dogs. This laboratory, if you will, is a great observational system for understanding canine behavior, much in line with many of the people that are listed here in the article, a brief history of dog training.

The birth of animal psychology

One of the first documented studies of animal behavior involves the story of a horse named Clever Hans. Right around the turn of the 20th century, Clever Hans gained notoriety for solving arithmetic problems. Oskar Pfungst, a student at the Psychological Institute of Berlin in 1907, studied the supposedly numerically-gifted equine. He concluded that although Hans may indeed have been clever, he wasn’t actually counting. Rather, the horse was reading his handler’s unintentional cues to show he had “solved” the problems. Clever Hans didn’t win any mathematical scholarships, but he did point out the need for more empirical methods of studying animal behavior.

Around the same time, scientist Ivan Pavlov was studying the canine digestive system. He noticed his dog subjects would salivate when presented with food. In one of his most famous experiments, Pavlov presented a specific sound to his canine subjects just prior to feeding them. With repeated trials, he noticed the dogs would salivate in response to the sound, even when the food was not present. The anticipation of the food produced the same effect as the food itself. This associative process, termed “classical conditioning”, became the foundation for our current understanding of animal behavior. 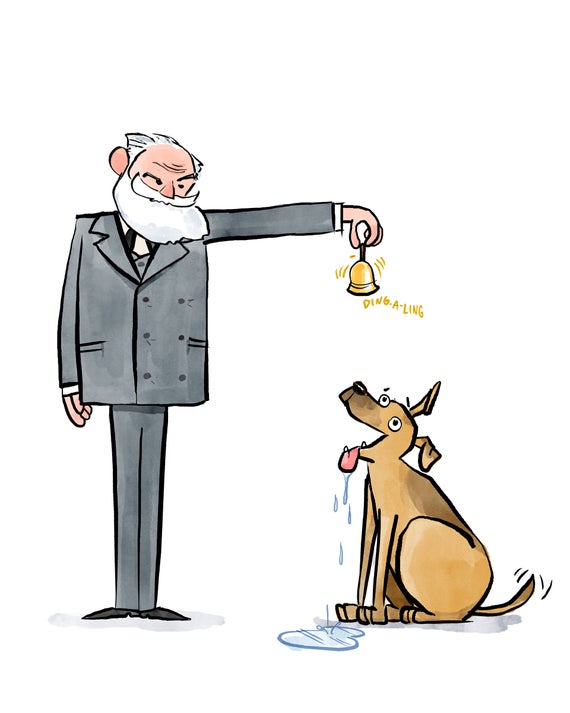 Edward Lee Thorndike (1874-1949) was one of the first to apply a scientific and statistical approach to motivational education and the use of positive reinforcement. He discovered that behaviors producing a desired effect are more likely to be repeated, while behaviors that produce an unpleasant effect aren’t. Thorndike called this the “Law of Effect”. Understanding how this phenomenon motivates canine behavior became the key to understanding how to encourage or discourage a dog’s behavior and is fundamental to effective training.

One of the most well-known figures in the field of behaviorism, Burrhus Frederic (B.F.) Skinner (1904-1980) created a device for measuring animal behavior — the now famous Skinner Box. The apparatus contained a lever, a slot for food rewards, and a source of water. The animal would be placed inside the box and would begin to move around. Without much to explore, it would eventually hit on the lever — and viola, food would drop into the tray. Soon enough, the animal learned that pressing the lever delivered a reward, and “operant conditioning” was born. 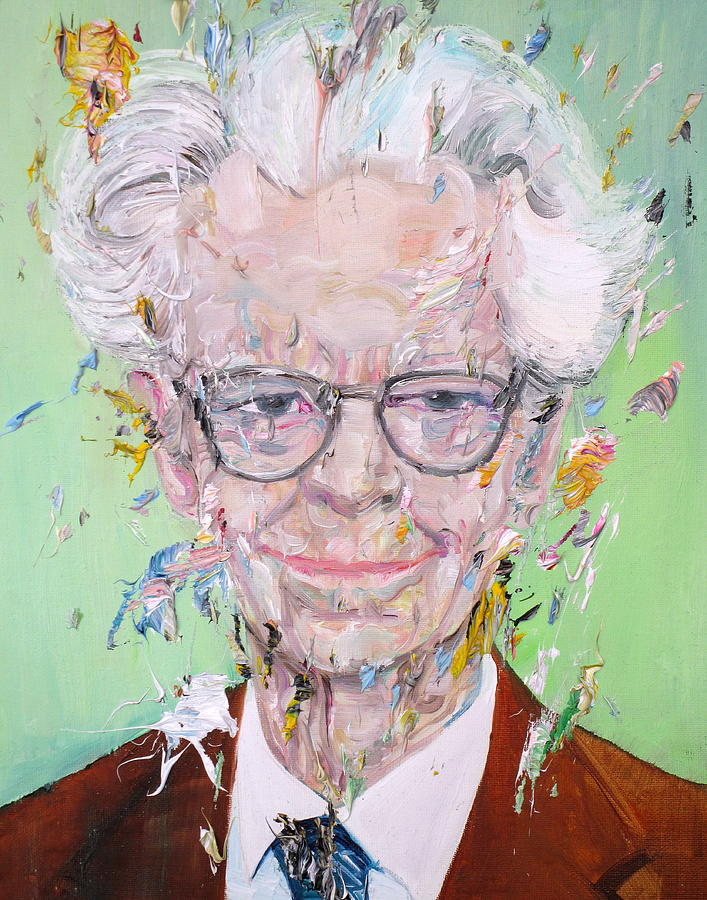 Skinner’s work built on Thorndike’s Law of Effect but revealed a much more detailed picture of the principles of learning. He thus had a huge impact on the field of modern dog training. From Skinner’s work, we know that desired behaviors should be reinforced, that behaviors can be shaped in incremental steps, and that immediate rather than delayed reinforcement facilitates the most reliable learning.

Dog training during the World Wars

Dog training as a profession got off to a rocky start during the two World Wars, primarily due to the demand for trained military dogs. This spurred the “Revolution of Compulsion”, when dogs were trained using harsh punitive methods. Konrad Most who was credited with this movement, played a role in the formation of the German Canine Research Society and Society for Animal Psychology. His aversive punishment-based methods were popularized in his book, Training Dogs: A Manual, first published in 1910.

The military took fast to Most’s principles of training and passed on this knowledge to many in its ranks. The US Government lent “credibility” to Most’s harsh training methods, and soon the general public adopted the same aversive techniques with their own dogs. Such methods have proven resilient, and some of today’s trainers continue to espouse similar training techniques.

The rise of force-free, reward-based training

Fortunately, the movement towards gentler training methods began in the years following WWII, when B.F. Skinner’s work was popularized by two of his students, Keller and Marian Breland. Their work fostered humane training methods and promoted their use worldwide.

In 1947, the Brelands founded Animal Behavior Enterprises, which brought together the fields of professional animal training and modern behavior science. Their mission was to try to teach people a more humane way of training animals. Using the tenants of operant conditioning, they trained thousands of animals for a variety of purposes. The Brelands moved the dog training field towards an alternative educational process that relied on kindness rather than force.

Many dog trainers came along in the 50s, 60s and 70s, but it was Karen Pryor’s Don’t Shoot the Dog, published in 1984, that provided a strong foothold for today’s force-free, reward-based training methods. She introduced the mainstream dog training community to clicker training, which helped propel force-free, science-based humane training methods to new heights around the world.

No history of reward-based dog training would be complete without mentioning Dr. Ian Dunbar. A veterinarian and animal behaviorist, he has authored several books, and in 1982, began teaching off-leash puppy socialization and training classes. He also created and developed the San Francisco SPCA’s Animal Behavior Department. In 1993, Dunbar founded the Association of Pet Dog Trainers, and over the past 35 years, he has given over 1,000 presentations around the world in an effort to popularize puppy socialization and dog-friendly training.

Another trainer of note is Terry Ryan, an award-winning author who began training dogs in 1968. According to legacycanine.com, “She was Program Coordinator for the Dean of the College of Veterinary Medicine, Washington State University, from 1981 until 1994. The programs involved the study of the human-animal bond and implementation of animal-assisted therapy programs. She was one of the original members of the Delta Society (now called Pet Partners), an international resource on the human-animal bond. Terry wrote some of Delta’s early training literature and was one of the first Delta Pet Partners animal evaluators. She presented several times at The International Association of Human-Animal Interaction Organization’s Symposiums.”

Along with Bob and Marian Bailey, Ryan held training camps around the world to introduce positive reinforcement training to a growing number of trainers, demonstrating how operant conditioning could be made more accessible and applicable to dog behavior.

Now, with the arrival of the 21st century, a growing number of well-known positive trainers are strengthening the movement toward compassionate, reward-based training (see below). Thanks to all these dedicated individuals, a new way of thinking about training the family dog has taken root. The aversive methods prevalent in earlier decades, such as hitting, jerking, shocking and pinning, have gradually and but steadily given way to kinder, more humane and compassionate training. The result is happier, healthier, better-behaved dogs!

The 21st century — solidifying the foundation of humane training

In addition to the important figures discussed in this in this article, a brief history fo dog training, a number of notable trainers helped consolidate the movement for humane, positive-reinforcement dog training in the 21st century. There are too many to mention here, but they include:

Quick facts about the evolution of dog training

Dogs and people have been teaming up for centuries, but you’d have a hard time finding anything written about formal dog training prior to the 1800s. From the records we do have, it’s pretty evident that the positive reinforcement dog training movement didn’t arise until the late 20th century. Prior to then, the human/canine relationship hasn’t always proven easy for the dog, as we humans often resorted to using the stick over the carrot.

Yet as our understanding of canine behavior has slowly grown, so too has our empathy and compassion, and we have evolved more humane ways of understanding and communicating with dogs. Today’s positive reinforcement dog training methods have their origins in clinical scientific experimentation, but they have at their core the fundamental principles of kindness.

We hope you enjoyed our very brief history of dog training. If you would like to learn more, we encourage you to seek us out on social media. Just search Dog Works Radio and as always visit our website Alaska Dog Works for many more training tips and tricks.